In this article, Peter Aquilina (Senior Investment Analyst and Head of ESG) analyses what Net Zero means for natural gas demand in the long term; and discusses how 4D analyses and values oil/gas midstream assets, considering both the risk and opportunity as we move towards Net Zero.

The headline goal of the Paris Agreement is to limit global temperature increases to well below 2°C, preferably to 1.5°C, compared to pre-industrial levels. To achieve this goal, parties to the Agreement aim to reach global peaking of greenhouse gas (GHGs) emissions as soon as possible, so as to achieve a balance between anthropogenic emissions by sources and removals by sinks of GHGs[1] in the second half of the century. Broadly speaking, signatories to the Paris Agreement are looking for Net Zero emissions by 2050.

Chart 1: Parties to the Paris Agreement 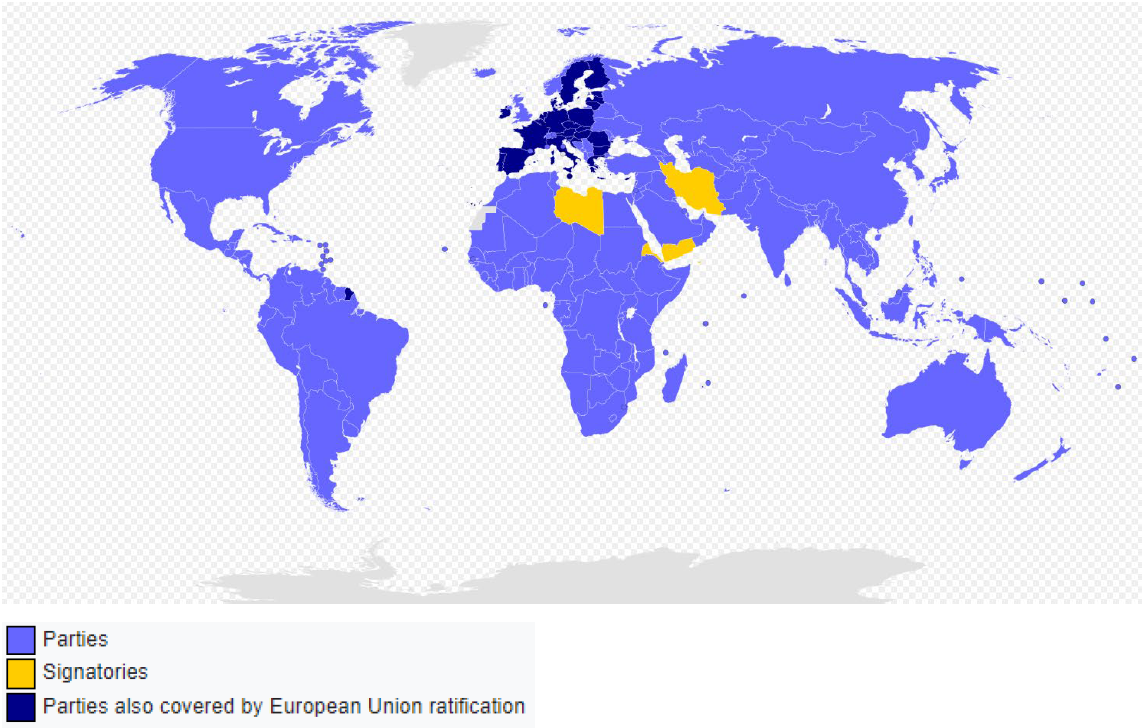 Many countries outlined their current Net Zero plans at the recent UN Climate Change Conference (UNCCC) in Glasgow (GOP26) in late 2021. Within these plans, most countries also outlined interim decarbonisation commitments for 2030. These interim targets are intended to provide a more tangible medium-term target for countries to establish detailed plans and to indicate the pace of GHG emissions reduction.

Albeit the pace of decarbonisation between now and 2050 is still unclear, there seems to be widespread political support to achieve Net Zero. This will no doubt create a strong push to decarbonise economies globally, providing opportunities and risks for investors, especially for certain infrastructure sub sectors, such as midstream oil/gas.

The rest of this article looks at how 4D balances this opportunity with risk for this sector in particular.

With roughly 25% of all global emissions coming from electricity generation alone, it’s clear the energy sector is central to achieving a Net Zero goal. However, this goal cannot be viewed in isolation, and energy market participants must balance carbon reduction strategies with other social obligations.

In summary, we believe there are three main targeted outcomes for energy market participants as they seek balance between energy transition, political goals, and customer satisfaction.

An additional consideration is to support economic growth, predominantly through employment and investment. The balancing of these factors may vary depending on the perspective of the individual or government. However, these three (or four) targets are typically prescribed by all energy market participants and stakeholders.

Natural gas has inherent qualities which support the above targets of affordability, reliability and GHG reduction.

The above attributes make natural gas an important transitory energy fuel in maintaining reliability and affordability for customers as the world transitions away from GHGs. It is on this basis that we expect to see significant ongoing global demand for natural gas and the assets that transport it.

Forecasts of the pace of GHG emissions reduction, and demand for natural gas in the long term, can be fraught with error and/or bias. A number of stakeholder groups have commissioned their own studies and forecasts from various consultants, which may cynically have a pre-determined goal that needs to be supported by the analysis. It is impossible to determine which, if any, forecast will be correct, and it is often difficult to understand if any particular forecast has inherent bias assumed within it.

Based on the views and forecasts of independent industry agencies and energy consultants, we are confident that natural gas will have a role to play in the energy mix in the very long term. Based on our review of a number of forecasts and studies, we are of the view that:

A summary of scenario analysis undertaken by two industry groups in the IEA and Wood Mackenzie is included in the Appendix (points 1 and 2).

5. What does this mean for the long-term prospects of the midstream sector?

At 4D Infrastructure, we define the ‘midstream’ sector as the infrastructure used in the transportation, storage, extraction and refining of natural gas, natural gas liquids (NGLs) and crude oil. Midstream is the ‘glue’ between upstream E&P and downstream distribution.

With the transportation of oil and gas remaining the core business of midstream companies for the reasons discussed above, we see a longer ongoing demand profile for those transporting gas. However, there are also potential future opportunities for companies to re-use (and re-purpose) their assets and expertise in a Net Zero world. The expertise of midstream management teams in managing energy infrastructure is easily transferable to no/low carbon fuels. In addition, the prominent position of terminals in industrial hubs and pipeline assets in connecting demand centres provides a good basis for utilisation for low/no carbon fuels such as hydrogen, CO2 from CCUS, renewable natural gas (RNG), and other biofuels – details of these fuel types are available in the Appendix (points 3 and 4). Examples of companies initiating pilot projects for these new projects is included in the Appendix (point 4).

Taking all of the above into consideration, we believe the core business for the midstream sector in transporting oil/gas is almost certain to be maintained through the period to 2030. Further to that, even assuming aggressive decarbonisation scenarios, there is still likely to be utilisation of select midstream assets in 2050 and beyond. Beyond this, there is the opportunity for companies to reposition their business and re-use their assets and skills for low/no carbon fuels. Midstream assets connected to oil/gas basins with economic and geographic competitive advantages, and to demand centres (domestic and international), are likely to be heavily utilised in the long term. This doesn’t consider the potential for assets to be repurposed to carry low/no carbon fuels such as hydrogen, CO2 from CCUS, renewable natural gas (RNG) and other sustainable biofuels.

We believe that midstream companies satisfy our definition of infrastructure, although their specific characteristics could put them more at risk of being stranded in the very long term (> 2050) under some aggressive Net Zero scenarios. However, even under aggressive decarbonisation scenarios, midstream companies with strategically placed assets connecting the lowest breakeven cost, natural gas basins are likely to be heavily utilised in 2050 and beyond.

Some of the due diligence and valuation considerations adopted by 4D in selecting the best midstream names in the sector and valuing them appropriately include:

7. Preferred names in the midstream sector

Taking the above points into consideration, 4D has a preference for midstream names, such as Williams Co (WMB-US) in the US, and Snam SpA (SRG-MI) in Italy.

Williams is a major midstream company in the US primarily focused on transporting and processing natural gas and NGLs. The key competitive dynamic of Williams is the location and interconnectivity of its asset base, which connects some of the most economically advantaged natural gas supply regions in the world to US domestic and global markets. This asset base is depicted below. 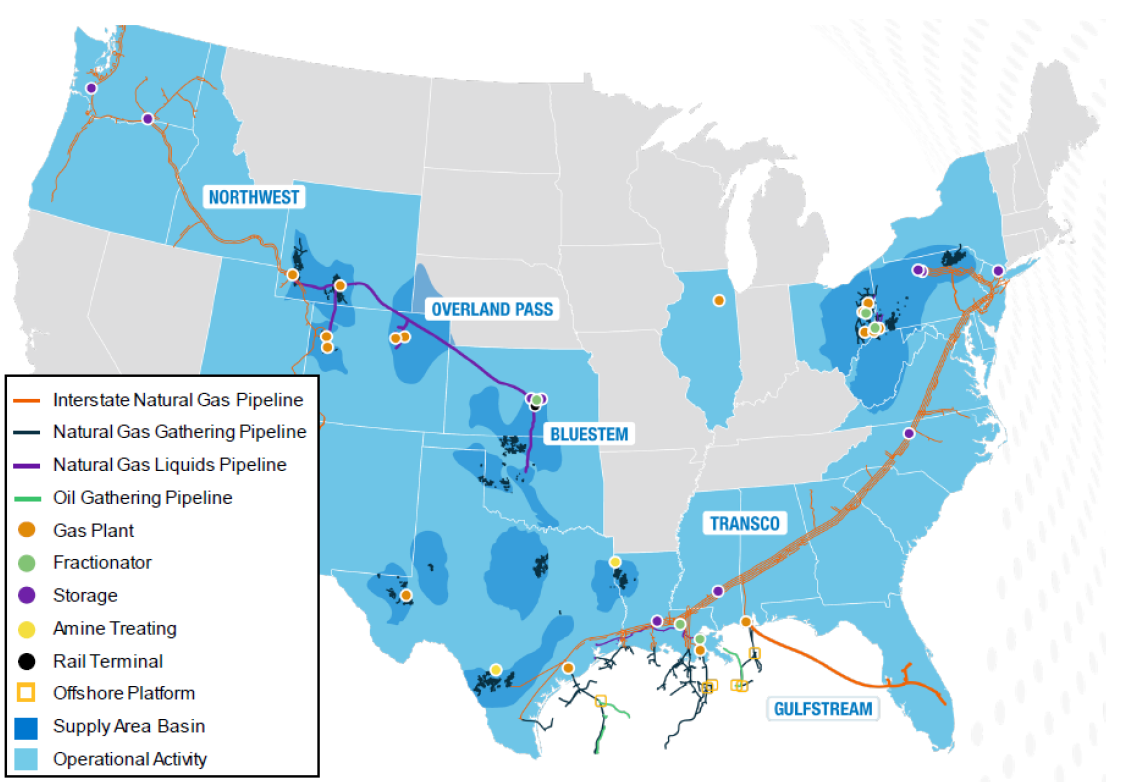 This broad asset footprint is expected to drive significant organic growth in the short to medium term while management are identifying investment opportunities that support the energy transition to a low carbon future – investing in renewable energy, RNG and exploring hydrogen. Management has communicated short-medium term growth in EBITDA of 5-7% driven by investments, but 4D assumes no growth thereafter, except that incorporated in contracts.

The competitive advantages of assets, interconnectivity through the value chain, combined with contractual protections provides Williams strong earnings resiliency. Operating in economically advantaged basins also means that as gas demand and price reduce post 2030 in a Net Zero scenario, the volume demand from these basins is unlikely to be impacted with less economic supply de-commissioned first. These combined traits provide strong volumes protections for Williams in a Net Zero scenario over the long term. Below is a depiction of the drivers of natural gas demand in the US to 2030 developed by Wood Mackenzie, which shows healthy growth for the next decade at least.

Chart 3: Natural gas demand drivers in the US 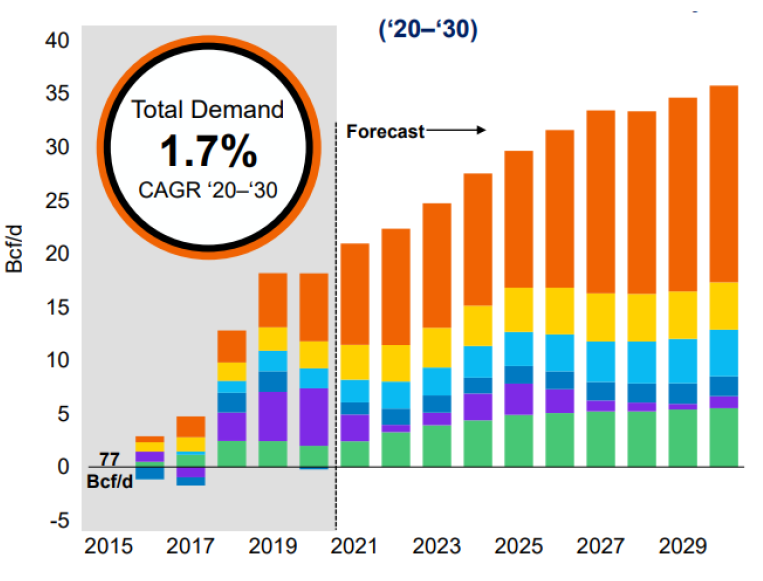 The combination of opportunities for organic, strong return growth; long-term earnings protection; a strong management team; and opportunities to participate in energy transition makes Williams a high-quality investment opportunity for 4D. Incorporating conservative base case assumptions, Williams’ strong five-year IRR valuation in the mid-teens (based on a share price of USD 34) and its EV/EBITDA discount to peers makes it an attractive investment proposition for 4D.

Snam is the owner of Europe’s largest gas transport and storage network, and one of the largest globally. Its transport network extends over 41,000km, including international assets and ~20bcm of storage capacity. Its main asset is the Italian gas transmission network, which is regulated given its monopoly position. The company benefits from a supportive regulator, high inflation protected regulated returns vs continental peers, minimal volume exposure and long-term visibility on investment plans.

SNAM has been the most prominent advocate of hydrogen (and other green fuels such as biomethane) in Europe over the last few years. Their RAB growth acceleration in the back half of the decade (to >3.5%) is attributed to expected approved investment, related to the national Italian plan for hydrogen called ‘the Hydrogen Backbone’. Given green hydrogen’s dependency on low-cost renewable energy, SNAM benefits from its Southern European position close to North Africa, where the region’s excellent solar resource could make it one of the most competitive green hydrogen production areas for European consumption. Ultimately, the hydrogen backbone would allow low-cost green hydrogen to be transported to those areas with highest demand, such as Germany.

Amidst the recent Russia / Ukraine conflict, and subsequent RePower EU plans (to wean Europe off Russian gas), the long-term competitive positioning of SNAM’s assets has strengthened, given its ability to diversify European natural gas supply from MENA and Central Asia via its pipelines, as well as using its LNG import infrastructure.

There is significant uncertainty as to whether the globe will be able to maintain global temperature increases to ‘well below’ 2°C in line with the Paris Agreement. Despite the communicated target of most countries, the challenges to achieving this goal are great.

Irrespective of the world’s long-term carbon trajectory, most industry forecasts assume that natural gas has a role to play in the long-term global energy mix. Even assuming aggressive GHG reductions are achieved, and the globe is able to maintain temperature increases to below 2°C, natural gas volumes are still expected to be significant in the longer term. This is because 1) developing nations will still likely utilise natural gas after 2050 for energy production, and 2) natural gas will be used in combination with CCUS, carbon sinks and in the creation of blue hydrogen. Therefore, based on the continued demand for natural gas, the business model of midstream infrastructure names focused on processing and transporting natural gas is likely to be maintained. There is further potential upside from repurposing midstream assets for use with hydrogen, CCUS, RNG, biofuels and other renewable fuels, which many companies are starting to explore.

4D adopts a cautious approach to investing in midstream oil/gas companies. We undertake significant due diligence regarding the quality of companies and their competitive advantages in the processing and delivery of natural gas. We also adopt conservative base case assumptions with regard to growth and terminal values, and undertake scenario analysis to understand the breadth of potential valuation outcomes. They also must adhere to strict ESG standards and stack up against their infrastructure peers on an overall quality basis. In doing this, we believe the investment proposition of specific midstream names is attractive.

[1] GHG sinks refers to human-made efforts to remove carbon from the atmosphere and offset a portion of carbon emissions. This can include technologies such as carbon capture as well as nature-based solutions such as reforestation and afforestation.
[2] Lazard’s Levelized Cost of Energy Analysis—Version 14.0, October 2020
[3] Natural gas explained, U.S. Energy Information Administration