In March 2021, we explored green hydrogen in our Global Matters article, ‘Green hydrogen – a European case study’, amidst the growing excitement around hydrogen as a decarbonisation tool. We also recently had our first site visit to a green hydrogen plant, and heard how trials were progressing.

In this blog, we revisit the topic and look at whether, among the myriad of facts, figures and proclamations, the hype has died down, or whether it’s genuinely progressing as a key element in the path towards net zero.

Well, just how big is the demand for hydrogen? The answer to this isn’t straightforward, as there are many different estimates about the future demand profile.

The International Energy Agency (IEA) estimates that to move the world towards net zero, global hydrogen demand will need to double from ~94Mt in 2021 to over ~180Mt by 2030[1]. In Europe, it’s estimated that more than a six-fold increase in hydrogen power from 300Twh to over 1,900Twh will be required by 2050[2].

Estimates of demand growth are arguably legitimised by the current pipeline for electrolysers, the key supply side technology that transforms electricity and water into green hydrogen. According to analysis from Aurora, the global electrolyser pipeline is currently 957GW, with 202GW scheduled to be operational by 2030[3].This includes early-stage projects (most of which probably won’t reach operation or final investment decision), but as a simple example highlights the scale of interest, as there’s only ~300MW of electrolyser capacity today. The amount of renewables required would also be massive, with the total pipeline needing to consume power roughly equivalent to current renewable output globally[4]. Moreover, year-on-year, electrolyser manufacturing capacity has doubled to almost 8GW annually, demonstrating how fast the industry is moving[5]. 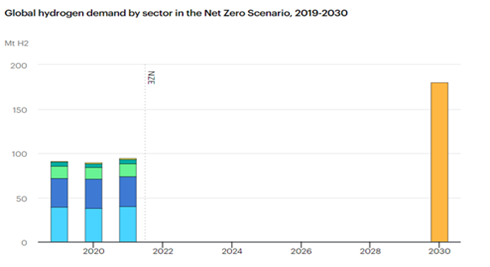 Policy support is critical for industry development, and to stimulate demand. Naturally, the last few years have seen a notable acceleration of green hydrogen-related policy. Some examples include:

EU with their RePower EU ambitions

Green hydrogen has been boosted by conflict, cost reduction and improved access to financing

There was previously strong debate around green, blue and grey hydrogen[7].The consensus was that blue hydrogen would play a strong role in decarbonisation efforts alongside low carbon green. Following the Russian invasion of Ukraine, it appears that this narrative has changed. Surging gas prices have caused the world, and  particularly Europe, to accelerate renewable proliferation, to ensure energy independence and reduce exposure to market volatility. With Europe looking to wean itself away from gas, naturally it has brought into question the viability of grey gas-dependent hydrogen versus green electricity-produced hydrogen.

The two key costs for green hydrogen production are electrolysers and renewable energy.

Despite recent cost inflation amidst supply chain issues, the medium- to long-term levelised cost of energy (LCOE) estimates renewable energy (namely wind and solar) are expected to continue to fall. Similarly, electrolyser costs are dropping rapidly, with new competition and technology improvements. The IEA estimates that electrolyser costs could fall 60-64% by 2025, and 68-72% by 2030[8].

As touched on earlier, the icing on the cake for green hydrogen cost competitiveness is supportive policy. Whilst the EU has been first in establishing hydrogen goals and targets, these goals have lacked financial incentives to kickstart the industry. By contrast, the IRA has focused on economics, which makes it cheaper to produce and sell green hydrogen. Blue hydrogen will also struggle to take advantage of the IRA’s tax credits, as lifecycle emission calculations include scope 1&2 and methane leaks, which further supports green hydrogen.

Finally in response to the IRA, it’s expected that the EU will imminently introduce more tangible financial incentives to increase demand and encourage investment in the region.

Heavy industry is the best use of hydrogen, with the greatest impact on emissions

Despite the protestations of the numerous hydrogen use cases, it’s clear that the best use for hydrogen is in industry. Hydrogen production in the chemical and petrochemical industries is responsible for greater than 900Mt of CO2 emissions[9] To put this in context, this is almost 3x the UK and France’s annual emissions, and equivalent to 2.5% of global emissions. As such, simply switching from grey to low carbon hydrogen in these hard-to-abate sectors can have a profound effect on emissions reduction. The technical challenges for this generally would be low as, like the IEA says, ‘it is a like-for-like substitution rather than a fuel switch’[10].

In transport, hydrogen fuel cells are often preferable to batteries in high use applications where faster refuelling, space optimisiation and productivity are key considerations[12].So, while hydrogen is generally less attractive than lower cost electric vehicles, its merits are growing in public and industrial transport. For example, electric buses or trucks may need longer to recharge batteries, which may require a bigger fleet than hydrogen counterparts. However, hydrogen buses or trucks may not be suitable for urban use, as the frequent stopping gives battery powered vehicles an advantage. Longer term, hydrogen use for shipping and aviation is expected to grow as technology improves.

Finally, hydrogen for residential and commercial use will likely remain limited given the various challenges in transport (such as technical limits on pipes and hydrogen blending), costs and overall disadvantages versus electrification. However, initiatives around blending may continue to help fuel overall hydrogen adoption and wider industry growth.

The plant produces green hydrogen from two solar PV plants and a 2.5MW electrolyser, which can produce up to 330 tons per year. It’s part of the Green Hysland European project, and aims to deploy a fully-functioning green hydrogen ecosystem, turning the island into the first hub in Southern Europe[13]. The project has secured several offtakers, including the Palma Public Transport company, which will initially use green hydrogen for five fuel cell powered buses, while Spanish hotel operator, Iberostar, will use their supply to produce heat and electricity for their local hotels. The project has the potential to help avoid up to 21,000 tons of CO2 emissions per year, and aims to be replicated across other EU island territories.

In Mallorca, we also heard from AccionaPlug, the joint venture between Acciona Energia, one of the world’s leading renewable operators, and Plug Power, one of the leaders in fuel cells. The joint venture was formed in recognition of the massive opportunities in the sector, and aims to invest over €2bn to reach a 20% market share of the Iberian green hydrogen market by 2030. They highlighted examples of companies like Lidl, ASDA and Amazon, which have all started (or aim to start) using fuel cell material handling vehicles / forklifts in their high frequency distribution centres to take advantage of refuelling efficiencies while decarbonising their operations.

Green hydrogen’s appeal as a decarbonisation tool continues to gain traction. However, further developments on regulation, infrastructure, funding, policy support and research and design are all required to ensure long-term green hydrogen adoption. At 4D, we’re best leveraged to the theme by our investments in utilities and renewable developers. Ultimately, green hydrogen requires a massive scaleup of green energy, and our investments in renewable leaders like Next Era, Iberdrola and ENEL will be key beneficiaries from increasing hydrogen adoption.

The content contained in this article represents the opinions of the authors. This commentary in no way constitutes a solicitation of business or investment advice. It is intended solely as an avenue for the authors to express their personal views on investing and for the entertainment of the reader.

[1] IEA
[2] Aurora Energy Research
[3] Aurora Energy Research
[4] Aurora Energy Research
[5] IEA
[6] IEA
[7] Grey hydrogen is currently the most used form of hydrogen. It is produced using fossil fuels (mainly methane) and the process to convert it to a useable form has significant CO2 emissions. Blue hydrogen is produced in the same way as grey, but the process employs carbon capture and storage, which significantly reduces the CO2 emissions relative to grey %. Green hydrogen is produced through electrolysis (electric currents are used to separate oxygen and hydrogen in water). This process is free of carbon emissions when the electricity used to drive the electrolysis is generated from renewable sources, such as solar and wind
[8] IEA
[9] IEA
[10] IEA
[11] EU Commission, IEA
[12] Acciona Energia, Plug Power
[13] https://greenhysland.eu/about-green-hysland/