Europe has long been the leader in the global energy transition. In this piece, we look at how renewable policy development is accelerating in Europe, focusing specifically on offshore wind – one of the fastest growing renewable technologies. We also consider how the sector outlook is both evolving and exciting.

The move towards net zero is supported by strong policy in Europe, including the:

With the ultimate goal of achieving climate neutrality by 2050, the EU unveiled the EGD[i] in December 2019. This general action plan included policy initiatives aimed at starting the green transition and unlocking €1 trillion of investment[ii]. This was soon followed by Fit for 55 in July 2021, a package of policy recommendations (pricing, taxation, standards, support measures) geared at the EGD's implementation with the overarching aim to cut greenhouse gas (GHG) emissions by at least 55% by 2030[iii]. Together, the EGD and Fit for 55 guidelines are aimed at generating 40%[iv] of the EU's electricity from renewable sources by 2030, up from 32% in the 2018 directive[v].

In response to the Russia / Ukraine crisis, the European Commission released the REPowerEU plan in May 2022[iv], which outlines a series of steps to quickly decrease the EU's reliance on Russian fossil fuels by accelerating the transition to clean energy. It suggests raising the EU's 2030 renewable energy targets from 40% to 45%, and places renewables at the centre of Europe’s energy security plan'[v]. Similarly, the UK released their Energy Security Strategy in April 2022, which also increased several renewable targets to increase energy independence and accelerate the pathway to net zero. 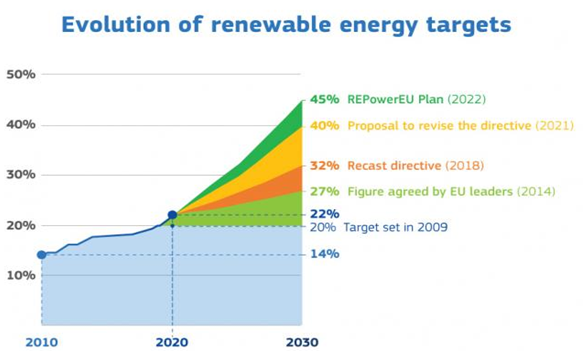 In its dedicated strategy on offshore renewables, the EU targeted 60 gigawatts (GW) of offshore wind capacity by 2030 and 300 GW by 2050 compared to 20 GW at the end of 2020[vi]. With REPowerEU, WindEurope[vii] estimates that 510 GW of new wind capacity (both offshore and onshore) will need to be developed by 2030, up from 190 GW today – equating to 39 GW per year new build (only 11 GW was built in 2021 and 18 GW estimated for 2022). While the REPowerEU didn’t directly increase offshore capacity targets, there is nevertheless a strong focus on quicker renewables deployment to support the sector through faster permitting, improving supply chain bottlenecks and improved planning among member states.

Meanwhile, the UK directly increased their offshore wind targets from 40 to 50 GW by 2030, alongside acceleration of other low/no carbon technologies such as nuclear, solar and clean hydrogen[viii].

Industry leader, Orsted, notes that just meeting Europe’s targets will require doubling the: “build-out rate of 3-4 GW offshore wind per year to 8 GW per year by 2030, and a further increase to 20 GW per year from 2036"[vi].

Europe (including the UK) benefits from some of the best areas in the world for offshore wind. It’s supported by great wind resource – with relatively strong and consistent wind speeds, as well as shallow water and calmer sea states – which makes it easier to develop sites closer to shore. Also, much of Northern Europe is disadvantaged by a relative lack of sunshine, which gives relative support to wind power.

The tables below present WindEurope’s estimated deployment by 2050 of 450 GW offshore wind capacity across European countries, and highlights the strong potential of Northern Europe. 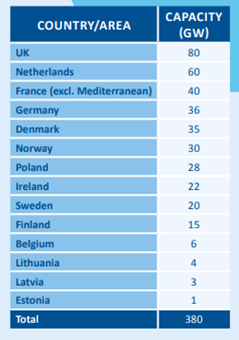 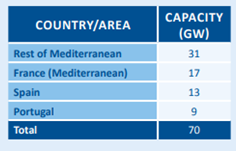 Source: WindEurope Our Energy Our Futureix

Allocation of seabed is the first step in offshore wind development. According to a 2022 study by WindEurope[x], EU member states allocated approximately 52,000 sq.km for offshore wind development through their respective MSPs. This is equivalent to more than 220 GW of capacity, and exceeds existing 2030 targets in major offshore European markets. While not all of these sites will be allocated to developers, and even less will make it to final investment decision, the numbers highlight the potential for further industry growth. 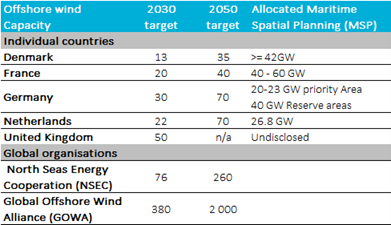 Over the last decade, offshore wind has evolved from a niche technology to a mainstream one, thanks to a sharp decline in the costs associated with installation and operation. According to Lazard’s latest unsubsidized levelized cost of energy analysis (‘LCOE’)[xix], offshore wind technology is now more economic than legacy power sources of coal and nuclear. This cost trend is expected to continue, albeit at a slower rate, largely driven by scale and ongoing technological advancements. 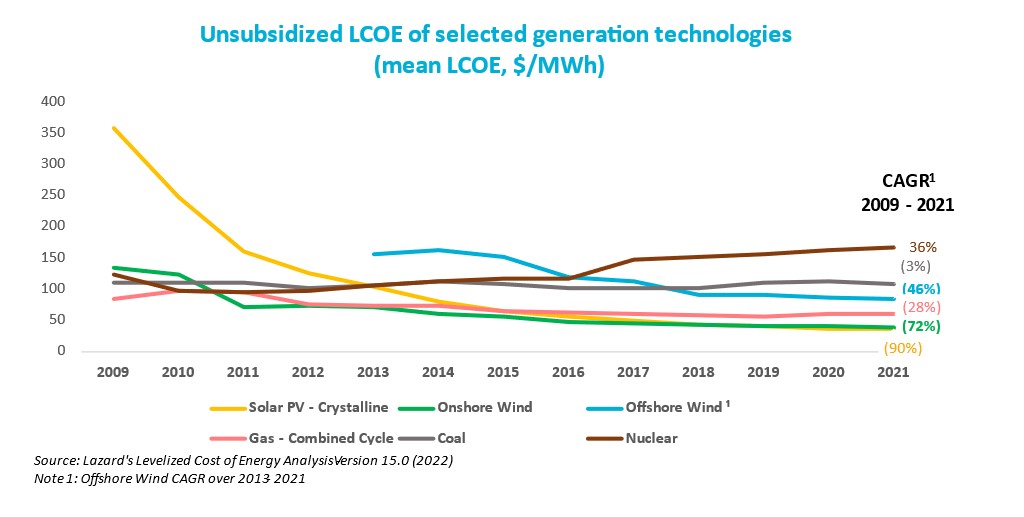 It’s estimated that expanding offshore renewable energy will require investment north of US$1 trillion in the next decade. This will be funded predominantly by private capital to not only build increasingly larger new wind farms at sea, but also scale up nascent technology like floating turbines[xx].

The scale of the opportunity is reflected in the development pipelines of most of Europe’s renewable leaders (most of whom are in 4D’s investment universe), which are expected to see significant capacity expansion over the next decade.

Risks to the story: increased competition, cost inflation and lower subsidies are potential headwinds to growth

Given the industry’s growth prospects, competition in the sector is increasing rapidly. In addition to pureplay developers and utilities, oil majors and infrastructure, and pension funds have all entered the market. This includes the likes of Shell, BP, Total and Macquarie’s Green Investment Group[xxvi] According to a 2021 Crown Estate Wind report[xxvii], 15% of offshore wind farms in the UK, both operational and under construction, were held by oil & gas producers (up from 12% in 2020) while financial investors accounted for 19%.

Competition will therefore be supportive in reducing required returns and the cost of offshore wind development – supporting its proliferation – but will diminish returns for existing market participants.

The current inflationary environment is also putting pressure on offshore wind developers’ returns. A typical offshore project takes several years to be completed. Usually, nominal prices are awarded at the beginning, while development costs are secured in later development stages. Hence, projects with prices awarded under the assumption of low / moderate inflation, with costs that have not yet been fully secured, face the risk of compressed returns, which could jeopardise the investment decision. Additionally, rising costs of steel is putting pressure on turbine manufacturers and ultimately impacting offshore wind developers’ returns[xxix].

While there is obviously huge appeal in capitalising on the growing offshore wind opportunity in Europe, companies do face several hurdles and risks in achieving standalone satisfactory returns on these large capital-intensive projects. At 4D, while monitoring the pureplay operators, we currently see greater opportunity to capitalise on the theme through transmission and distribution networks and integrated utilities. An example is our position in Iberdrola – a well-run, undervalued company we believe has a strong track record in offshore development and a diversified business model (networks, renewables, and supply) which allows flexibility in its capital allocation and allows it to better manage the return pressures faced by pureplay renewable companies. This flexibility was evident in the recent Capital Market Day, where increased focus and capital was allocated to networks over generation in the current environment.

The content contained in this article represents the opinions of the authors. This commentary in no way constitutes a solicitation of business or investment advice. It is intended solely as an avenue for the authors to express their personal views on investing and for the entertainment of the reader.