News & Views: Could the US Supreme Court's decision against the EPA derail decarbonisation efforts?

On 30 June 2022, the Supreme Court of the United States (SCOTUS) ruled in favour of West Virginia and a group of other states in their lawsuit against the Environmental Protection Agency (EPA), potentially limiting the agency’s ability to enforce actions to limit greenhouse gas (GHG) emissions.

In a majority vote of 6-3, where all six conservative judges sided against the EPA, SCOTUS ruled that the agency overstepped its authority and required ’clear congressional authorisation‘ to enforce switching from fossil fuel generation to low/no carbon energy. Until now, the EPA had relied on powers provided under the Clean Air Act (1970) in regulating and restricting certain types and volumes of GHG emissions from fossil fuel generation facilities.

In this article, we consider what this ruling means for decarbonisation efforts in the US, and for us as global infrastructure investors.

Ramifications of the ruling

In its ruling, SCOTUS relied on the ‘major questions’ doctrine; an academic term the Court used in a ruling for the first time. The doctrine allows judges to strike down regulations or agency actions that ‘address questions of vast economic or political significance’ without explicit authorisation from Congress[1].

The ruling raises legal questions about the ongoing authority and powers available to the EPA in regulating emissions, and, specifically, what constitutes ‘major’ - in short increasing legal uncertainty[2]. Some observers have questioned whether the US’ commitments to decarbonisation, and specifically the Paris Agreement, can be achieved with the current uncertainty around the EPA’s ability to enforce emissions reductions. And if the US is unlikely to achieve its commitments to the Paris Agreement, does that put global efforts to achieve net-zero and limit global temperature increases to well below two degrees Celsius at risk?[3]

Does this impede the US’ Paris Agreement commitments?

Under President Biden, the US made commitments to achieve net-zero by 2050, and reduce GHG by 50% to 52% below 2005 levels by 2030. In light of the SCOTUS ruling, arguments for and against the US’ ability to achieve these targets are summarised in the table below. 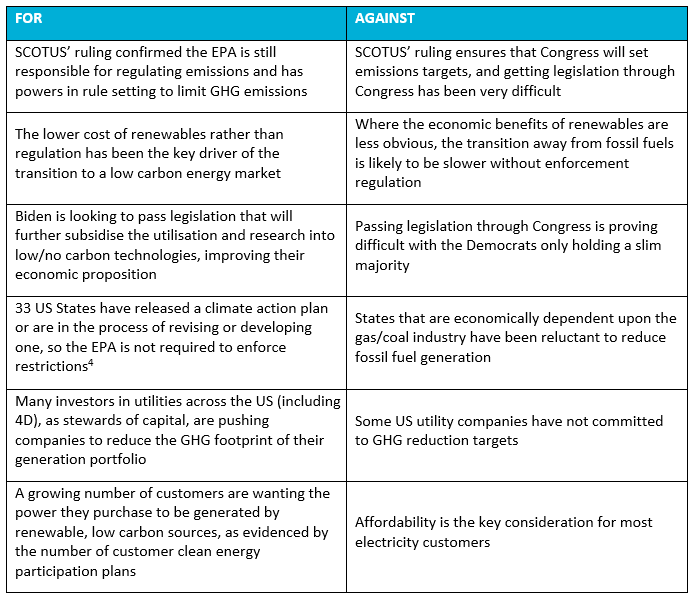 There’s no doubt SCOTUS’ decision raises questions as to the EPA’s ongoing effectiveness in enforcing emissions reductions. This could see some fossil fuel generation facilities, which would otherwise be decommissioned or retrofitted with technology to reduce emissions (such as carbon capture), continue to operate and emit GHGs for longer. This is more likely in states that are economically dependent on the fossil fuel industry.

Importantly, however, the US’ interim 2030 commitment under the Paris Agreement is more dependent upon the economic benefit argument in transitioning coal generation to renewables, combined with batteries and/or peaking natural gas generation. These economic benefits are supported by technological improvement in low/no carbon technologies and tax subsidies which are currently in place. Biden has communicated the ambition to improve and/or extend these subsidies as part of proposed legislation, which will improve the economics of the transition.

Either on their own, or because of investor activism, most US utilities have set GHG reduction targets for 2030 that are in-line with, or more aggressive than, the US’ economy wide targets. This improves our confidence that despite SCOTUS’ ruling, the US can still achieve its interim commitment under the Paris Agreement.

While the speed of ultimate decarbonisation may remain unclear, as infrastructure investors, we continue to see a real opportunity for multi-decade investment as every country moves towards a cleaner environment. At 4D, sustainability assessments have always played a key role in our investment process. As such, we continue to favour those companies that have been forward-thinking and are capitalising on the decarbonisation opportunity while generating attractive returns for investors. In the US, this includes American Electric Power and NextEra Energy; both of which are investing heavily in energy transition and will unlikely be derailed by the recent SCOTUS decision.