News & Views: The cost of war

Russia invaded Ukraine on 24 February 2022, no doubt expecting a quick and easy triumph in achieving its territorial ambitions. Consistent with the old proverb ‘those who ignore history are doomed to repeat it’, Russia has created a long, drawn-out conflict with no real path to a resolution.

But this is not the first time over the past 75 years that a global superpower has been drawn into an ugly foreign conflict, believing its huge resources and massive fire power will lead to quick victory – think about the US experiences in Vietnam (1955-75)[1] and Korea (1950-53).

What is also now becoming evident is that Russia is paying a significant cost for its actions. To be very clear - there is no doubt that the human and personal costs suffered by Ukraine and Russia far outweigh the economic and financial costs (E&F) caused by the war. Nevertheless, the E&F costs are huge and, left unaddressed, will lead to further human costs. In this article, we identify what we believe are the major E&F costs being incurred by Russia, and consider what they may mean for China and Taiwan.

Economic and financial costs of the Ukraine war for Russia

All the major rating agencies have withdrawn their Russian credit ratings as summarised below. Prior to war the ratings were: S&P (BBB-), Moody’s (Baa3) and Fitch (BBB).

While there are numerous factors limiting Russia’s ability to borrow at present, the absence of credit ratings effectively means it is locked-out of the global public debt markets and needs to find funds from other sources.

Russia has been downgraded from B, with a negative outlook to CCC – the lowest possible MSCI rating.

Significantly, this means that Russia is no longer doing its fair share of work in protecting the world’s future.

This reflects that Russia is currently in default after it failed to honour part of its foreign currency denominated external debt.

As with the credit rating, country downgrades of Russia by very reputable research organisations, such as the EIU, mean that it will have great difficulty in sourcing funding and generally doing business internationally.

Source: World Government Bonds website
A CDS is a financial derivative that allows an investor to ‘swap’ or offset their credit risk with that of another investor.

The CDS pricing suggests that very few, if any, in the market are interested in taking on Russian credit risk at the current time – further obstacles to Russia raising funds and doing business internationally.

The economy now looks to be heading into a recession.

his means further hardship for the Russian populous as commercial activity declines, businesses likely close and jobs are lost.

The domestic banking sector is under immense pressure as a result of international sanctions and the exclusion of several Russian banks from the SWIFT international payments system, says the EIU. In addition, major countries are preventing Russia’s central bank (CBR) from using its international reserves, and sanctions have been placed on Russian individuals and companies by the US, the EU and other countries. A number of major international companies have left Russia.

A banking system under pressure is clearly a major impediment for Russian citizens – what is happening to their life savings?

Clearly, Russia, and the Russian people, are paying a huge E&F cost (as well as personal and human costs) as a result of the invasion of Ukraine.

To put this issue into context, imagine if a new, democratically elected Australian government achieved all of the above outcomes in its first 6 months in office. What would be the reaction of Australian voters?

Having highlighted the issues Russia now faces, in an effort to be completely neutral we also want to acknowledge the negotiating ace it still holds – its commodity reserves. Europe acknowledges the short-term difficulty in diversifying energy supply, with the major risk being Russia completely shutting off gas ahead of winter. This clearly gives Russia a near-term bargaining chip. However, longer term, the current crisis has highlighted the need for such diversification, and Europe is now fast tracking the shift with growth in renewables, faster permitting and opportunities from Repower EU. As a result, the energy transition is, and will be, the fastest growing infrastructure subsector over coming years, further eroding Russia’s commodity strength over the medium term.

Would China pay the price for Taiwan?

This is the key geo-political question of our time, and the answer will have long-term ramifications for all of us.

China’s recent sabre rattling following the Nancy Pelosi visit to Taiwan suggests that it may well be willing to pay the price.

However, a closer look at recent Chinese history suggests it may be too smart to follow Russia’s path, and indeed does understand the lessons of history. During the ‘Chinese miracle’, as it is known, the Chinese economy experienced astonishing growth, averaging almost 10% a year over the last few decades and catapulting the country to become the world's second largest economy. In 1978, when China started the program of economic reforms, the country ranked ninth in GDP with US$214 billion. Forty-four years later, it has a GDP of US$19.9 trillion and is expected to surpass the US by 2030 in economic size. 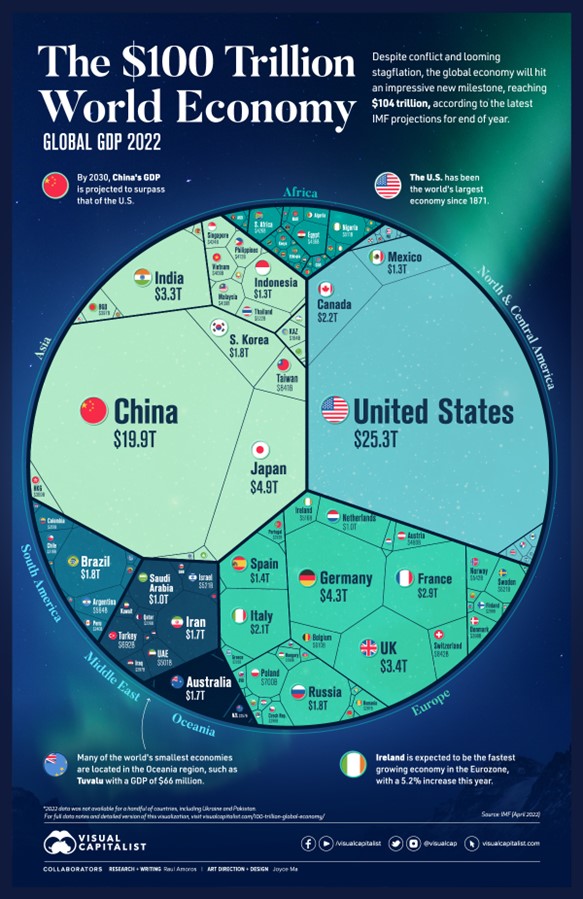 Perhaps even more importantly, over this same period more than 850 million people have been lifted out of poverty. This, we believe, is the key factor in this discussion. Delivering economic benefits to the masses has lifted individual wealth in China, but also meant the populous was largely content (getting richer and healthier), and therefore not a threat to the Chinese Communist Party’s grip on power. It is very unlikely that this same populous would welcome a return to a life of poverty, isolation and need. We believe this is the largest single voice constraining excessive action by the current regime.  Given the lessons in Ukraine, why would they risk all they have achieved by paying too high a price?

We believe the domestic political and economic case for China to avoid severe sanctions from the rest of the world is clear. Unfortunately, rational, humane decision-making has not been a feature of historical conflicts, and we continue to monitor the situation closely.

[1] The US lost over 58,000 military personnel, and Australia over 500, during their involvement in the Vietnam War between 1964 and 1973. It was a very costly war, and one that was ultimately lost.
The content contained in this article represents the opinions of the authors. The authors may hold either long or short positions in securities of various companies discussed in the article. This commentary in no way constitutes a solicitation of business or investment advice. It is intended solely as an avenue for the authors to express their personal views on investing and for the entertainment of the reader.