In this article, Sarah Shaw (4D’s Global PM and CIO) and Greg Goodsell (4D’s Global Equity Strategist) describe what 4D’s country review process involves, why it is so important, how it fits in with our stock valuations and its impact on portfolio construction.

At 4D Infrastructure (4D), we have developed a fully integrated investment process whereby country risk is assessed alongside our stock analysis. We do this because we believe country risk is real, can impact stock investment decision making, and the risk can shift – both positively and negatively – over time.

Right from the early origins of the 4D business, country risk was a key area that we thought needed to play a significant role in our investment process. As truly global investors, we believe understanding not just a company’s drivers and risks, but also a country’s drivers and risks, is crucial to investment decisions. How can we invest in a company if we aren’t comfortable with its country of origin or operation?

In this article, we describe how the assessment of this key variable evolved to what it is today. First, however, we want to briefly demonstrate why country risk has always been so important to us.

Country risk is real, and shifts over time both in a positive and negative direction.

The current Russia/Ukraine war demonstrates country risk. Russia has been severely sanctioned by the international community as a result of its actions. At 4D, we have always graded Russia as red.

There has been no greater event exposing country risk than that exhibited during the global financial crisis (GFC) from 2007-2008. Prior to the recent COVID-19 recession, the GFC was considered the most serious financial crisis since the Great Depression (1929-1939). So, using changes in a country’s long-term Standard and Poor’s (S&P) credit rating as a proxy for changes in country risk, how did major global economies fare during the GFC and since?

Some nations really struggled, but none more so than Greece, which went from a solid S&P investment grade rating of ‘A-/A+’ pre the GFC to a virtually uninvestable ‘C’ (see chart 1 below). Now that is country risk deteriorating rapidly! Fortunately, Greece has exhibited a gradual recovery since then, although 4D still rates it as a red jurisdiction as a number of key metrics remain stretched and it has a propensity to quickly move into political instability (see the country review in the Appendix). 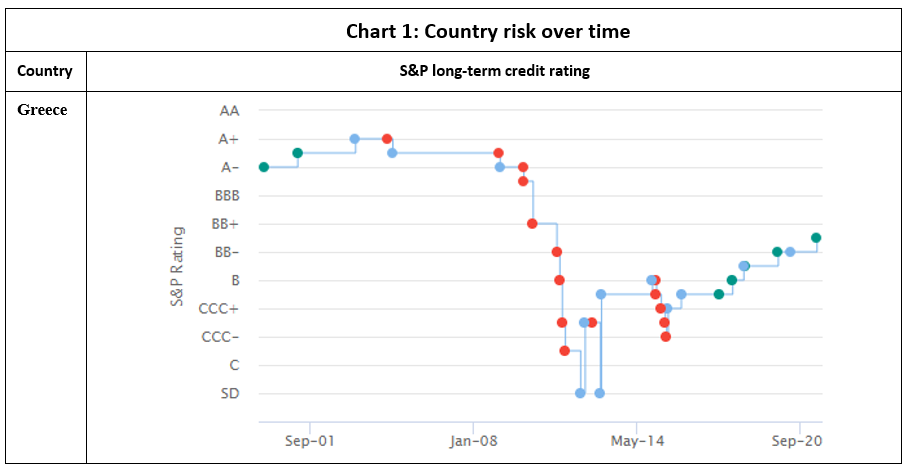 But it is not just major, high profile, macro events that can impact country risk. Sometimes risk deterioration can be a far more subtle, almost a creeping, incremental event – a product of longer-term structural decline. For example, chart 2 reflects a gradual rating decline for Japan during the 21st century, although it remains in the investment grade ‘A’ category.

Deteriorating national demographics and excess levels of public debt have been important factors in this gradual rating erosion of Japan. Similarly, but more quickly, the UK rating deterioration shown below reflects its decision to exit the EU, which was driven by a narrow June 2016 referendum result (52% voted to leave, 48% to remain).

At 4D we currently grade both Japan and the UK as green jurisdictions, although the UK experienced some time at yellow during Brexit. 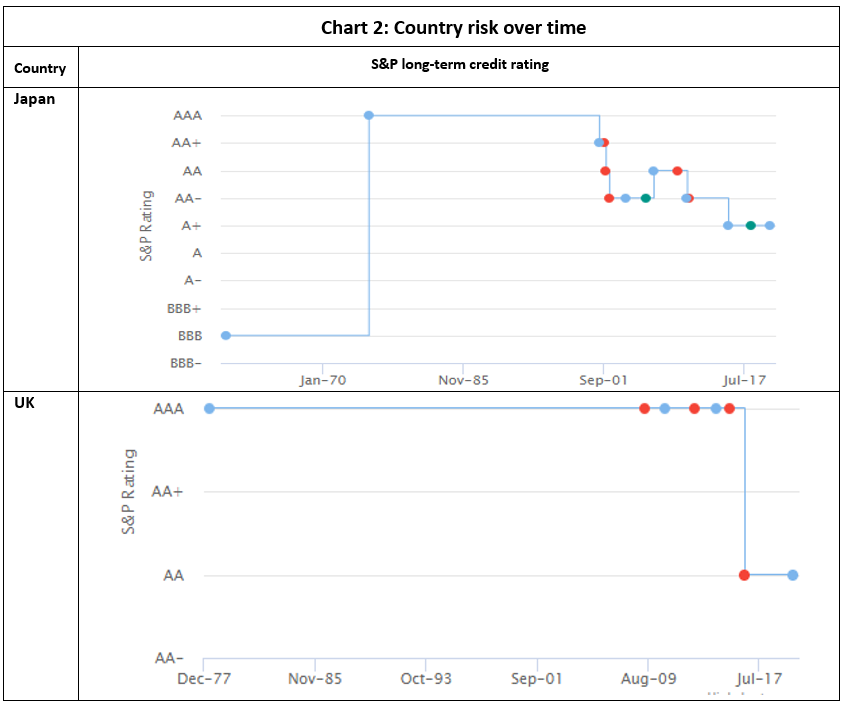 Importantly, changes in country risk can also be positive. China’s rating history (see chart 3 below) very clearly reflects its economic and social growth and advance during the 21st century, with a steady rating climb since the early 1990s. We grade China as green. 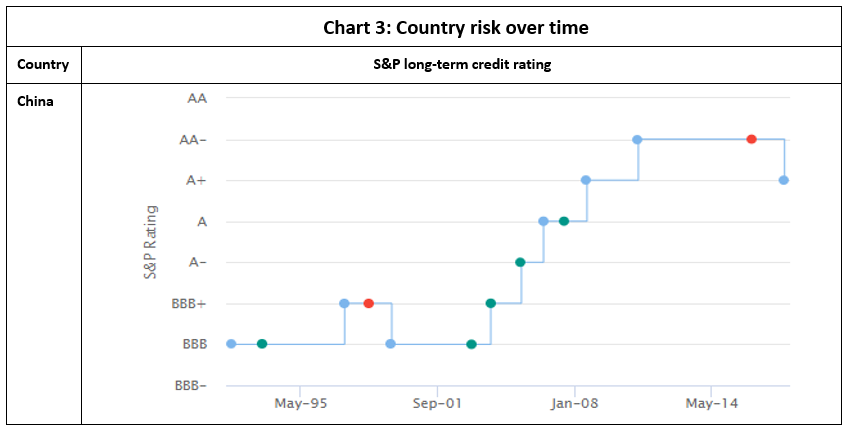 Finally, some things just ‘seem right’ and don’t seem to change, as reflected by Germany’s rock solid ‘AAA’ rating history below, and the ‘almost’ rock solid history of the US. We rank both countries as green. 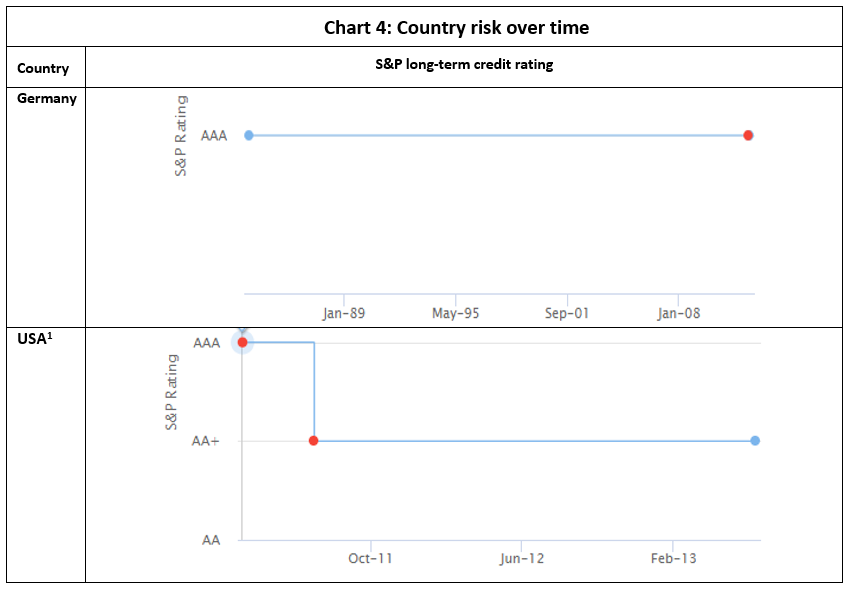 Our approach to country risk assessment is designed to answer one key question: is the country under review an acceptable investment destination?

To get the process underway, and provide a perspective on a country during its initial review, countries are given a Preliminary Grade based on their S&P long-term credit rating as follows.

This is a preliminary rating only. We then complete the 4D country review process, which involves a detailed assessment of the four key country risks below.

After a country review is completed, each country is given a final grade using a traffic light system of:

While every country is assessed on the four key risks identified above, the ultimate grade does not necessarily represent an equal attribution to each risk. That is, the ultimate grade (if not green) is likely dictated by the weakest link. For example, Russia has been graded red since 2015 despite a quite solid financial and economic position, due to ongoing political sanctions in Crimea, concerns around governance practices, and the recent Russian invasion of Ukraine.

This final colour designation dictates how much of the global fund’s investment portfolio, in aggregate, can be allocated to stocks in that particular country grade. For example, as shown in table 7 below, stocks from yellow countries in aggregate can only make up 25% of the global portfolio. No stocks from red countries can be held in the portfolio. These gradings are assessed at both a listing and asset level.

The final country colour grading also dictates the market risk premium (MRP) we employ to value stocks from that country – the lower the country grade, the higher the MRP used, which means the country risk is directly reflected in stock valuations.

Because our country reviews have a direct link to company financial models (via the MRP) and lead to hard portfolio country limits, we believe our investment process is fully integrated, with country risk assessment playing just as important a role as our stock reviews and valuations. We believe this is unique to 4D.

We have been employing our country review process since 4D’s inception in 2015. Each relevant country is assessed at least annually, but an interim review can also be triggered by a particular event such as Brexit. In 2021, we completed over 30 country reviews, with 70% ranked green, 15% yellow and 15 % red. Some of the interesting rankings and changes over the past six years are summarised below. 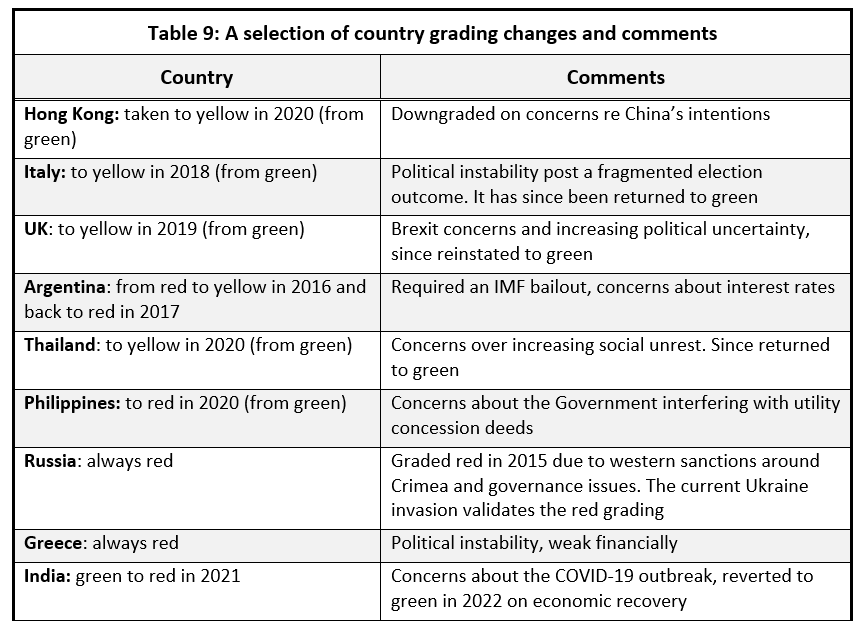 At 4D, we have always considered country risk a key factor in stock analysis and portfolio construction. The GFC provided a very real demonstration of country risk in practice. In response to that, we intentionally developed an integrated investment process that included both country and stock analysis as described above. We believe our investment process is both effective and unique, and has supported our overall performance since inception.

Included in the Appendix is a sample of some our 2021 short-form country reviews – Austria (green), Hong Kong (yellow) and Russia (red) – which reflect a summary extract of the much more detailed full country reviews.

[1] The source for this data only reports the US S&P rating from April 2011, accounting for the short duration of this chart.