The recent invasion of Ukraine by Russia was clearly a shocking event which, in 2022, was hoped would never happen again. At 4D, we are supporters of sanctions imposed on Russia and have reviewed our portfolio for Russian exposure (regardless of materiality), while conducting a deep dive into what this conflict means for the global infrastructure sector in the near and medium term.

Putin’s reasoning behind the Russian invasion of Ukraine seems principally related to Ukraine’s potential desire to join the North Atlantic Treaty Organisation (NATO), and Putin seeing this as a threat to Russia.

The Western world quickly united (including the traditionally neutral Switzerland) in opposing Russia’s actions and introducing a broad array of sanctions.

NATO is unlikely to directly assist Ukraine militarily as Ukraine is not a member, and such an intervention would lead to the first ever direct conflict between two nuclear armed super-powers. Hence the importance and extent of the non-military, economic and political sanctions.  If the sanctions can effectively target and hurt wealthy Russians, then they may also ultimately influence Putin, or a social movement to oust him.

Further afield, China’s Xi Jinping will be watching the evolving situation – and importantly, the West’s response – closely. Our view is that Xi’s biggest concern is domestic social unrest, which could derail his leadership. As such, we don’t believe he can achieve this by supporting Russia (discussed further below). However, nor do we believe China will condemn Russia.

4D has never had any direct exposure to Russian securities.

Our investment process incorporates a country review process, which looks at four key parameters (economic, financial, political and ESG risks) to determine whether we believe a country is an acceptable investment destination. This review is undertaken before we even look at assets within that country.

Russia is graded Red (uninvestible) under our process, and has been so since our initial review in 2015, when 4D began. The principal reason for this is Russia’s invasion of Crimea in 2014 and its subsequent annexation. International sanctions were imposed (and remain) on Russia as a result of that aggressive action. While they are nowhere near as extensive as today’s, they clearly indicated unacceptable behaviour – hence the Red grading and no core exposure to Russian assets (see Annexure for the short form of our 2021 Russian country review).

As a consequence of the more recent sanctions, we reviewed our portfolio for any exposure to Russian assets, no matter how negligible. We placed trading restrictions on any exposed positions until companies had confirmed an exit from Russia or a writedown of assets to zero (where exit was not immediately possible), as we expect all our portfolio positions to support the current democratic stance against the invasion. As a result, negligible exposure has now been written off or the stock is restricted.

IMF[1] analysis suggests that, in addition to the suffering and humanitarian crisis from Russia’s invasion of Ukraine, the entire global economy will feel the effects of slower growth and faster inflation. The IMF identified three main channels through which impacts will flow.

The IMF added that, while some effects may not fully come into focus for many years, there are already clear signs that the war and resulting jump in costs for essential commodities such as oil will make it harder for policymakers in some countries to strike the delicate balance between containing inflation and supporting the economic recovery from the ongoing COVID pandemic.

There are concerns that China may provide assistance to Russia in its invasion of Ukraine. This could lead to the imposition of sanctions on China, similar to those imposed on Russia. At a virtual meeting on Friday 18 March 2022, US President Biden warned Chinese President Xi of possible ‘consequences’ for supporting Russia; and Chinese President Xi indicated that ‘The Ukraine crisis is not something we want to see’. He added that the events again show that countries should not come to the point of meeting on the battlefield. Conflict and confrontation are not in anyone's interest, and peace and security are what the international community should treasure the most.

Why would China assist Russia in Ukraine?

Reasons could include global politics and ensuring Russia’s future political and potential military support of China. It would also underpin a powerful military alliance balanced against the might of US/NATO in Europe. China may also see business opportunities in Russia given the economic void created by the sanctions.

With this economic context, there is far less incentive for China to risk its globally dominant economic position to engage in a major conflict at this point in time.

International trade is the lifeblood of the world economy, but is subject to constant change from economic, political and environmental forces. Emerging economies have seen their share of total global trade rocket in recent years.

China’s economic interests are different from its security concerns. China is deeply integrated into the global economy. Its share of global trade has increased significantly during the global pandemic, as has its share of global direct investment inflows. China’s share in global trade at the end of 2021 was about 17%, and its share in global direct investment inflows at the end of 3Q21 was ~19%. Its total trade flows, which exceeded $US6 trillion last year, dwarf those of Russia.

China’s firms and leadership are aware that major efforts to support Russia and violate existing sanctions could bring down secondary sanctions on them, especially if such support were to include military assistance. Russia is vulnerable to such sanctions; China would be even more exposed.

Below is a table highlighting China’s 15 top trading partners in terms of export sales. That is, these countries imported the most Chinese shipments by US$ value during 2020. Also shown is each import country’s percentage receipt of total Chinese exports. 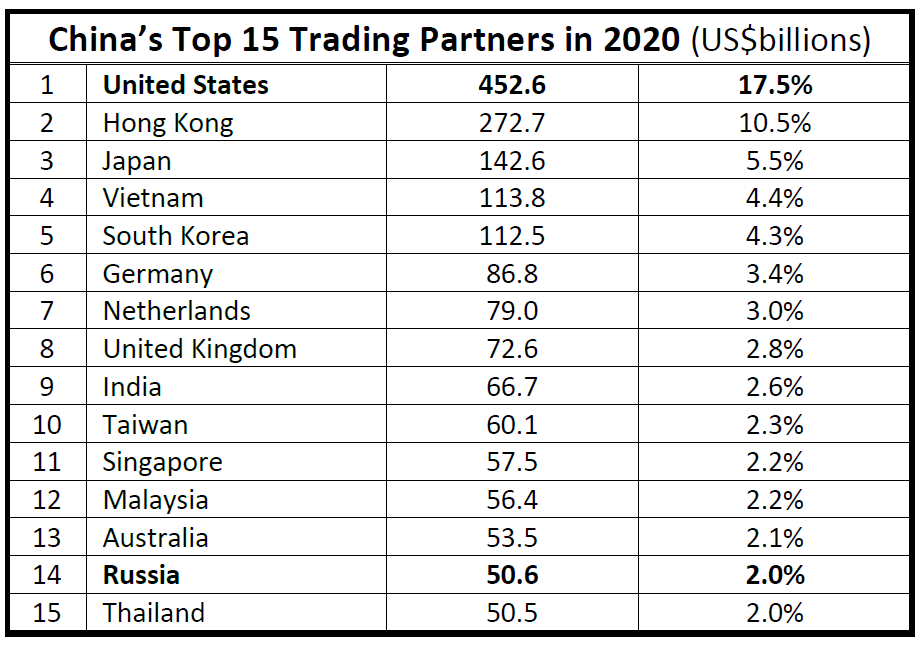 Clearly, any trade sanctions imposed on China by the US or the rest of the world would have a material negative impact on its economy.

It is in China’s interest for the global economy to remain strong, especially as China is suffering a further wave of COVID and President Xi is seeking a record third term in office.

Given the Chinese government has recently set its GDP growth target for 2022 at around 5.5% (higher than most economists anticipated) and has set the goal of ‘common prosperity’, having a significant portion of the Chinese economy subjected to Western sanctions would be a major negative. China has indicated that it supports an end to the war – it is in the country’s interests to do so.

The domestic political and economic case for China to avoid supporting Russia in the Ukraine war, and risk severe sanctions from the rest of the world, is clear. Unfortunately, rational, humane decision-making has not been a feature of the Ukraine war so far, and we continue to monitor the situation closely. We also do not rule out indirect support in some way, as long as it doesn’t invoke sanctions (e.g. China buying more Russian gas, which would lower energy costs in China (domestic win) while indirectly financing Putin’s activities).

In broader sector terms, we have assessed the immediate and longer-term impact on infrastructure assets in terms of direct and indirect consequences of the current conflict.

The conflict has seen an immediate and sharp increase in power prices across Europe as the flow of Russian gas is disrupted and countries scramble to source alternative fuel sources. In the short term this could see coal re-enter the generation mix. Over the medium to longer term we see alternative gas sources being secured, the development/extension of nuclear generation, and further fast-tracking of renewable generation as countries look to balance the social needs of their populous with decarbonisation goals.

Immediate impacts of the conflict can be felt in the transport space, due to closure of air space and ports as well as the disruption in commodity sources and supply chains.

As discussed above, inflation will remain high given the contribution of energy in the CPI bucket, which continues to favour transport names (as well as real rate utilities) that have an explicit inflation hedge. However, a significant jump in fuel prices around the globe has a number of flow-on effects to infrastructure names. 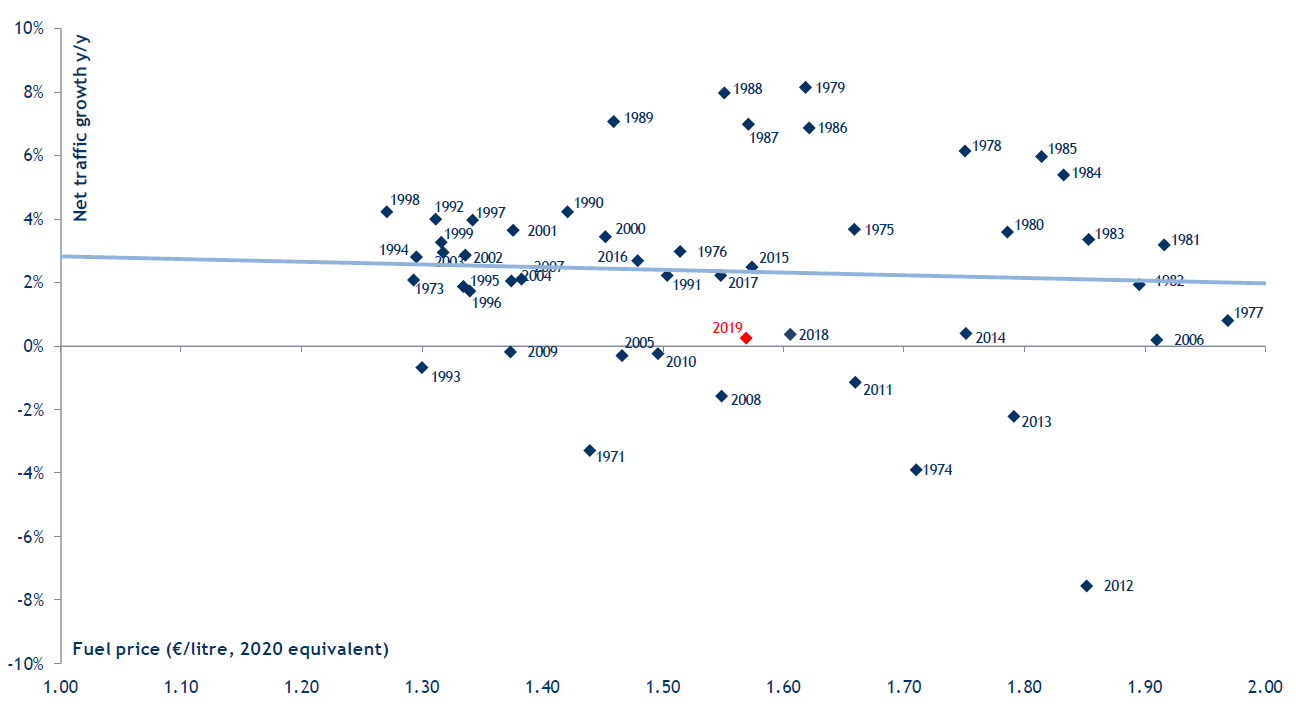 Source: Mediobanca
Note: 60% of traffic in Italian motorways are commuters driving <50km for each trip. The above correlation is one example and should not be considered a proxy for all motorways. 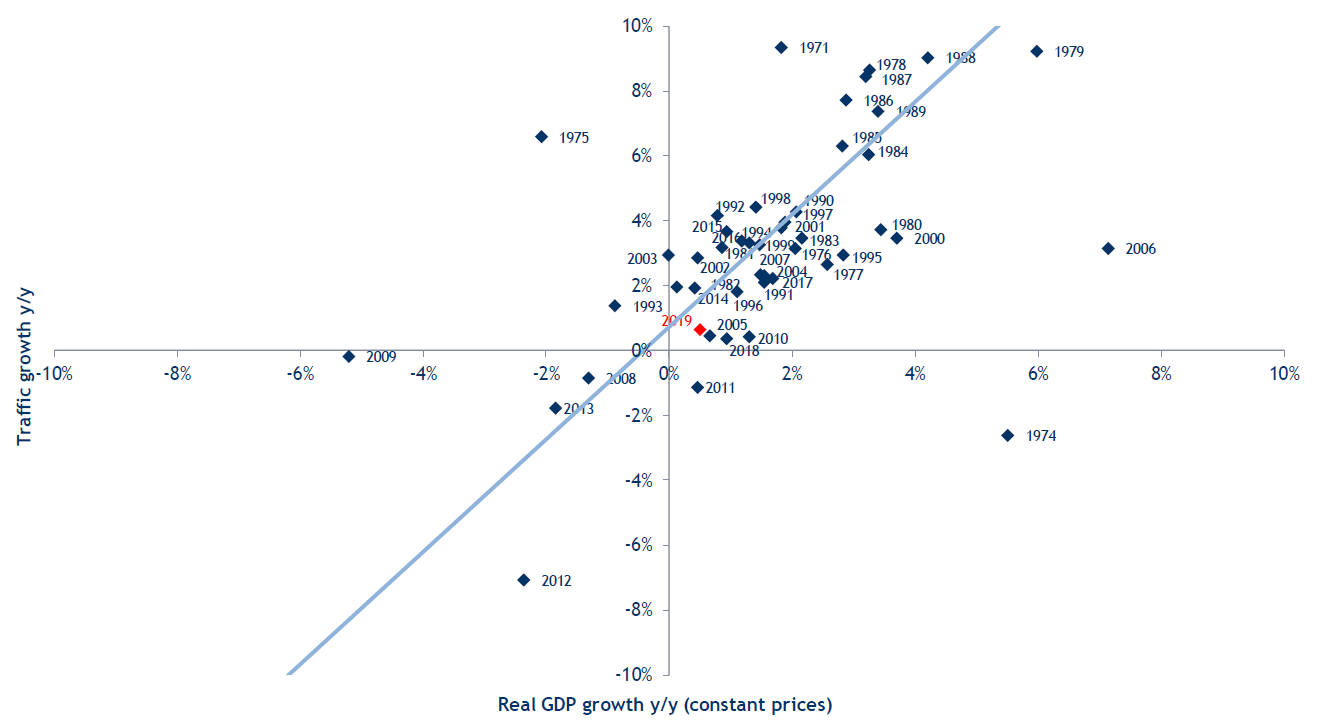 Source: Mediobanca
Note: 60% of traffic in Italian motorways are commuters driving <50km for each trip. The above correlation is one example and should not be considered a proxy for all motorways.

The situation in Ukraine is, above all else, a major concern from a humanitarian and global stability standpoint. The positive aspect so far is just how fast the Western world has united in opposing Russia’s actions, introducing a large and diverse suite of sanctions designed to punish Russia economically and isolate it internationally. Potentially there are more sanctions to come.

While it will be a matter of waiting to see how effective sanctions are in influencing Russia’s behaviour, from an investment perspective there are some clear near-term negative impacts (fuel prices, energy costs and inflation uptick), but also some short-term and long-term relative winners in the infrastructure space, including user pay assets (inflation link), rail (increased competitiveness and soft commodity exposure), energy infrastructure (volume support) and utilities building for the future (integrated and pure play regulated utilities).

As always, 4D looks to maintain a diversified (regional and sector) portfolio of the best combination of value and quality within the infrastructure sector. At the same time, we look capitalise on long-term infrastructure thematics while remaining cognisant of near-term head and tail winds, including the current conflict and resultant political and economic responses. 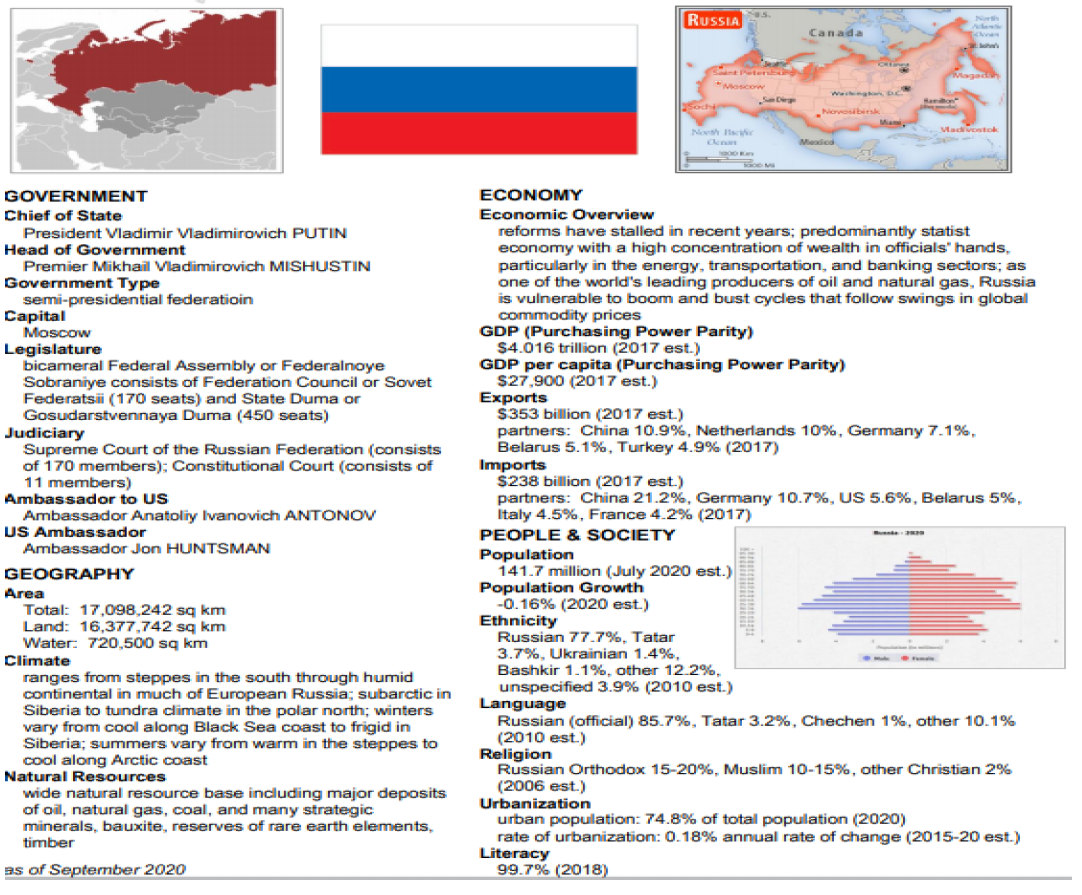 Like all nations, Russia had a tough battle with COVID. An economic recovery is underway. However, we are retaining it as a Grade 3 (Red) jurisdiction for the following reasons.

The Trend is returned to Stable with improvement hoped for.

[1]. ‘War in Ukraine Reverberates Around World’, IMF Weekend Read, 19 March 2022
[2]. Source – Stastistics.com
[3]. SMH 16 March 2022: ‘As China quietly joins sanctions against Russia, Xi night be too rational to risk arming Putin’. Tianlei Huang and Nicholas R. Lardy are China experts with the Peterson Institute for International Economics, a Washington-based think tank.
[4]. Cheniere announced on 9 March 2022 that it had agreed to amend the LNG sale and purchase agreement it has with Engie to increase the contracted volumes and extend the term of the agreement.
[5]. Published in 2021 by BIMCO and International Chamber of Shipping (ICS)