Global Matters: The outlook for global listed infrastructure investment in 2019 and beyond

Sarah Shaw, Chief Investment Officer and Global Portfolio Manager from 4D Infrastructure, examines the unique attributes that make infrastructure an asset class for all stages of the investment cycle, outlines 4D’s economic outlook for 2019, and explains why the actions of the US Federal Reserve will be key to how the year evolves.

With active management, an infrastructure portfolio can be positioned to take advantage of both the opportunities and challenges 2019 throws at us. This is facilitated by infrastructure’s structural composition, as it comprises two quite distinct and macro diverse asset subsets (Regulated Utilities and User Pays).

Regulated Utilities (the so called ‘bond proxies’), such as electricity, water and gas providers, are more immediately adversely impacted by rising interest rates/inflation and are slower to realise the benefits of economic growth. This is due to the nature of their business, whereby their returns are measured independently of volumes and are subject to regulatory oversight (which takes time). In addition, the conflicts between corporate profitability, environmental costs and household bills can be highly politically charged (e.g. Australian power prices). As a result, both the regulatory review process and the final outcome can be unpredictable.

By contrast, User Pay assets are positively correlated to GDP growth and wealth creation. Typical User Pay assets are airports, toll roads, rails and ports, where users pay to use the asset. These stocks capture GDP growth via volumes and often have built-in inflation protection mechanisms through their tariffs. As interest rates/inflation increase over time, this macro correlation leads to earnings upside. This should then be reflected in the relevant stock price and performance.

We remain optimistic about the macro outlook for 2019

While not as buoyant as 2018, we remain optimistic on the macro outlook for 2019. We see US and global economic growth slowing in 2019 but are not expecting a US recession.

As shown in the table below, the key US recession predicting indicators generally suggest limited risk at present. 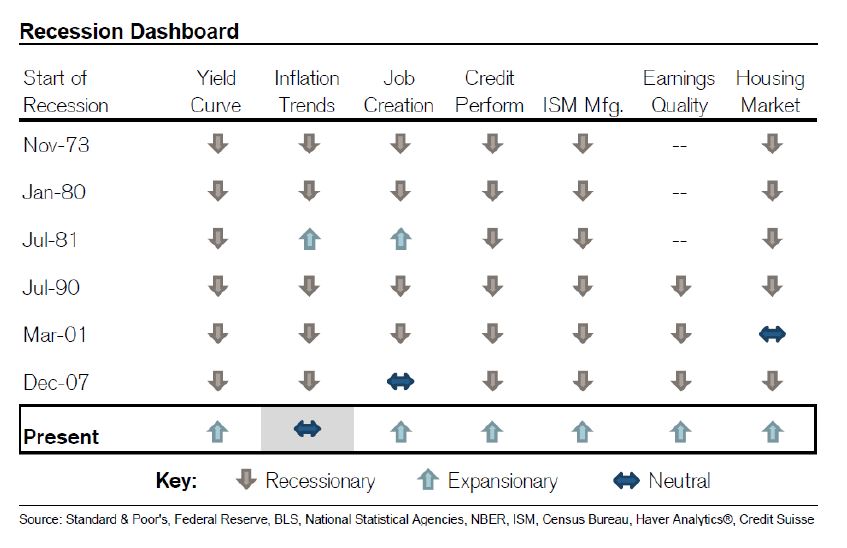 While the US yield curve briefly inverted at the end of March, the US jobs market is solid and, as shown in Chart 1, there are no signs of a crisis in debt markets. 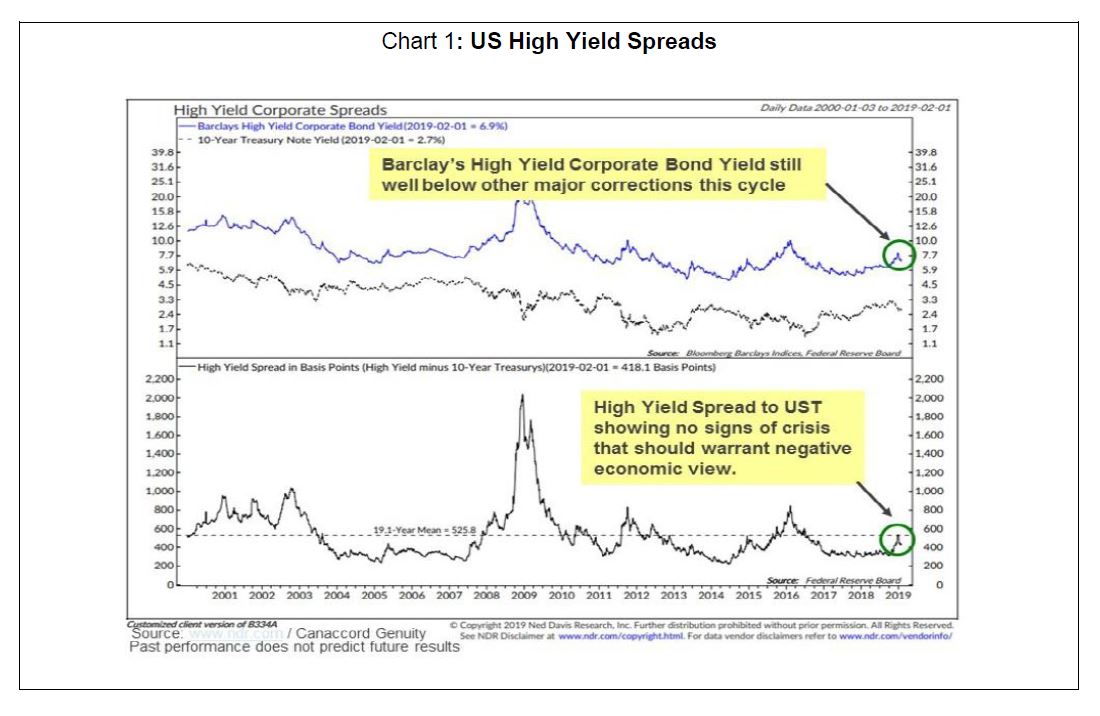 Accordingly, our global growth outlook is similar to that of the IMF, as shown in Chart 2 below. 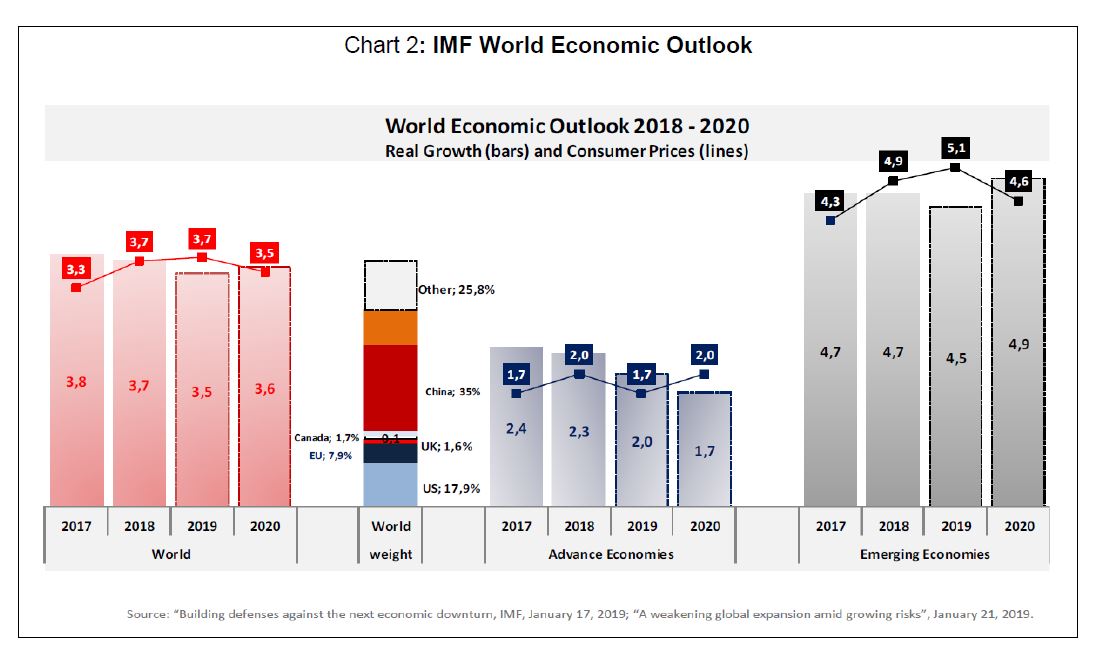 Actions of the US Federal Reserve will be critical

Key in all of this will be the US Federal Reserve and other central banks around the world. We expect the Fed will be responsive to reported data and act accordingly. We are already starting to see this in their communications with the market and a more dovish rhetoric emerging. Accordingly, with the US economy slowing but still in positive territory, and inflation still within range, we expect the Fed will only hike once or at most twice in 2019.

While rising interest rates act as a brake on an economy, a 1-2-hike scenario, as compared to Q4 2018 market consensus of 3 or 4, should actually see some relief in the market. Infrastructure assets are sensitive to changes (and the expectation of future changes) in interest rates, some more so than others – in particular the Regulated Utilities discussed above.

However, we believe an environment where global growth remains positive, inflation is ticking-up modestly and previous expectations of rising interest rates are tempered, would be conducive for equity markets in general and also for infrastructure assets to perform well – particularly those that have a positive correlation to the macro environment such as User Pay assets. It would also be supportive of an emerging market (EM) recovery, as the threat to those economies of forced rate hikes (in line with the Fed) is mitigated.

Therefore, with our 2019 outlook of ongoing but slower global GDP growth and modest inflation, we remain overweight User Pay assets and underweight Regulated Utilities. However, should this be derailed by a US Fed policy error (e.g. lifting US interest rates or unwinding their balance sheet too quickly) or geo-political events, we can quickly reverse this overweight into the defensive Regulated Utilities which offer equity downside protection.

The potential impact central banks could have on the global economy is illustrated in Chart 3 below. The QE asset purchase policies adopted by central banks had a significant impact on markets, which is why there is now such a focus on how central banks around the world unwind their ballooned balance sheets. 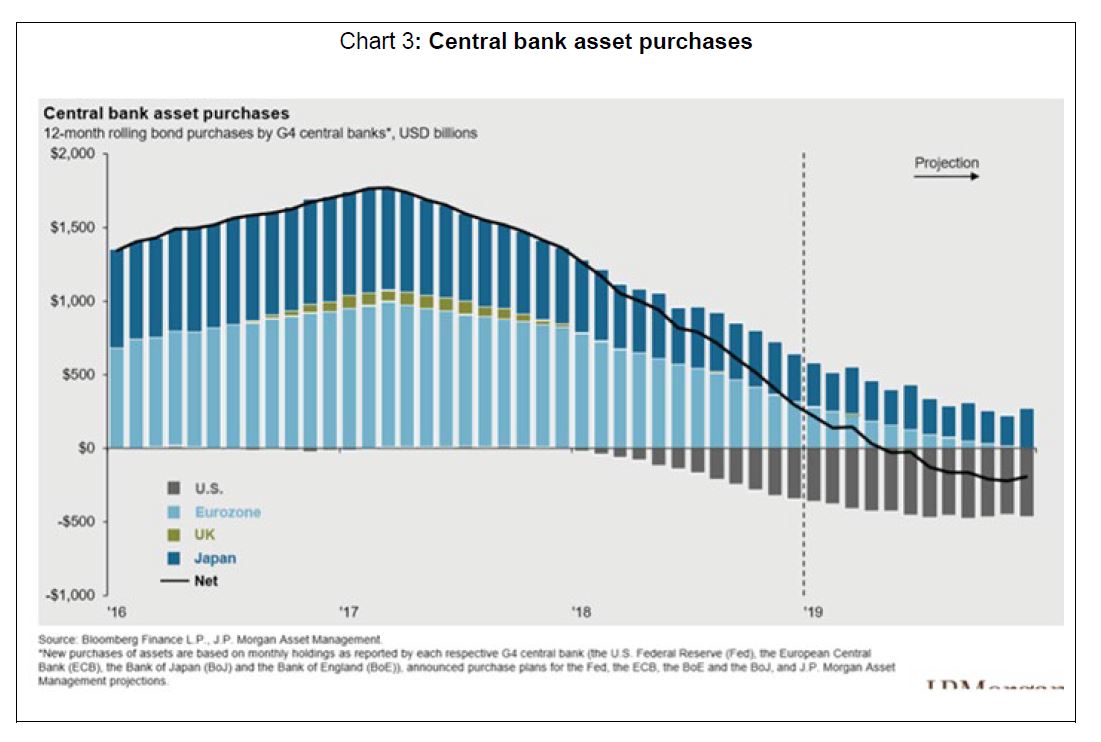 Longer-term demographic trends further support the infrastructure asset class.  The emergence of the middle class, particularly in EMs, is a theme we find very exciting at present and one we believe will provide enormous opportunity for investors.

Why are we excited? Given the potential size of the middle class in EMs (China, India and Indonesia alone account for 40% of the global population), changes in spending and consumption patterns will have significant implications for global business opportunities and investment for decades to come.

From an individual’s perspective, as personal wealth increases in a country (reflected by a growing middle class) consumption patterns inevitably change. This starts with a desire for three meals a day; moves to a demand for basic essential services such as clean water, indoor plumbing, gas for cooking/heating and power; and progresses over time to include services that support efficiency and a better quality of life, such as travel – with demand for roads (on which to drive that new scooter and then car) and airports (to expand horizons).

Importantly, one of the clear and early winners is infrastructure which is needed to support the evolution. For example, at present only around 10% of the Chinese population has a passport (and only around 5% in India), yet airports globally are reporting record passengers driven by Chinese tourists. At the World Economic Forum in Davos, the CEO of Chinese travel provider Ctrip, Jane Sun, predicted the number of Chinese passport holders would grow to 240 million by 2020 (next year) up from the current 120 million passport holders today (or 8.7% of the population).

Chart 4 shows that, as disposable income has grown in China, so too has the amount of travel undertaken by Chinese residents, both domestically and overseas. We expect this trend to continue. 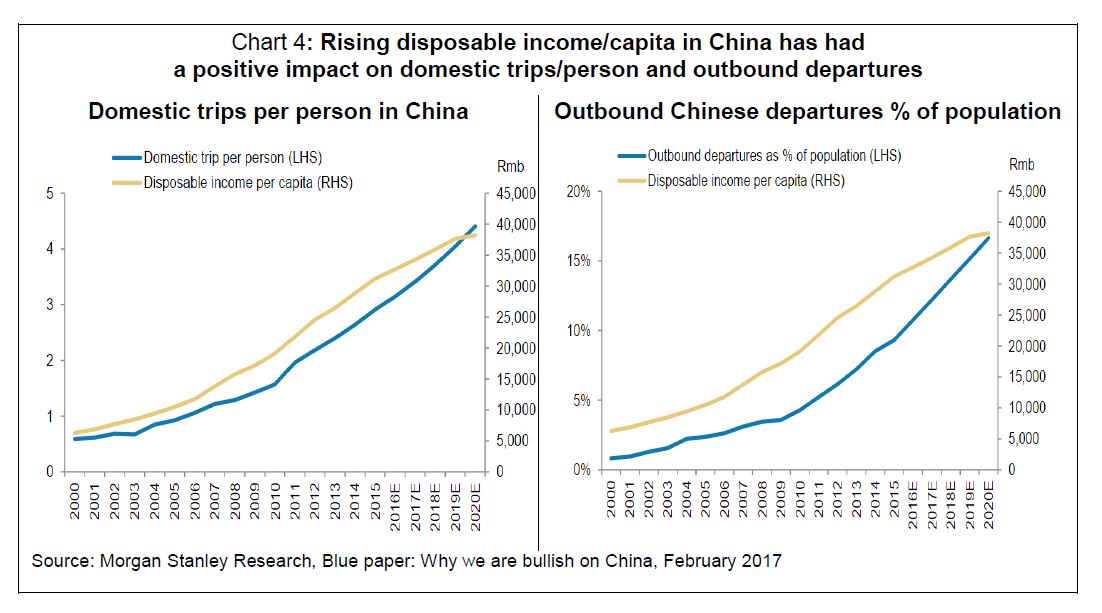 A further example of the impact of an expanding middle class is the natural correlation between growth in GDP per capita and vehicle ownership as shown in Chart 5. China, like India and Indonesia, still has a very low level of vehicle penetration. However, as each nation’s GDP per capita continues to climb, it would be expected that so too will each country’s level of vehicle ownership. Car production can therefore be expected to be strong, as will the demand for new and improved roads. 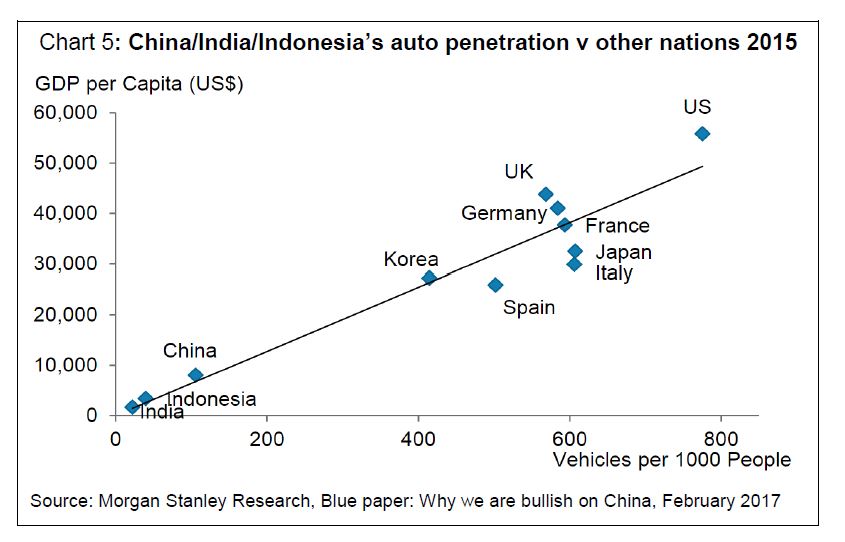 From an infrastructure investment perspective, the consequences of this changing demographic are enormous, and include capturing the domestic demand story within the EMs by way of utility and transport investments, as well as a growing need for new and expanded international (and domestic) airports, toll roads, port infrastructure and utility services more generally.

There has been no shortage of headlines and proposed policy that could potentially disrupt our expected outlook, at least in the short term. It’s important to maintain a focus on the well-publicised, prevailing macro issues such as the direction of US interest rates and potential for US Fed policy error, global growth/inflation, US/China trade wars and Brexit.

From a demographic standpoint, our biggest immediate concern stems from political threats (e.g. Jeremy Corbyn’s threat to nationalise the UK electricity, gas and water utilities should he be elected; and populist rhetoric globally, as discussed further below). Over the medium term, however, certain countries’ unfavourable population demographics (i.e. ageing populations) will put pressure on economies and governments alike.

Populist political movements is a more recent theme of concern to us due to its potential to derail sensible policy construction and implementation.

What is populism? One definition that resonated with us is that populism is ‘an ideology which pits a virtuous and homogenous people against a set of elites and dangerous “others”’ (Albertazzi and McDonnell 2008). It can, and is, coming from both the left and right in the political spectrum, and is evident in many of the geopolitical issues dominating at the moment: the influence of President Trump, Brexit, the new Italian coalition government, AMLO’s election in Mexico, and France’s yellow vest protests.

What is also becoming evident is that while populist political policies can work in getting a candidate or party elected, they are often very difficult to implement as they are either incredibly divisive (such as Brexit, or a US/Mexico border wall), or run into the normal fiscal and monetary hurdles of government – such as the battles the new Italian government had with the EU in managing their fiscal position, with the EU successfully demanding greater austerity (often the mortal enemy of a populist political agenda!).

What does this all mean for infrastructure and equities more generally? As we indicated earlier, populism creates an environment where poor or ill-defined public policy is developed and attempted to be implemented; which is detrimental for not only asset markets, but society in general. This is a major concern for 2019 and beyond, and something we are monitoring very closely on a global and regional level.

Overall, we believe infrastructure as an asset class should perform well in 2019. Given infrastructure’s unique composition of two macro diverse assets sub sectors – Regulated Utilities and User Pay assets – as well as it being truly global in nature across developed and emerging markets, we believe a portfolio can be positioned for all stages of an investment cycle and to take advantage of in-country opportunities.