A common dictum of listed equity investment is that infrastructure stocks[1] under-perform as interest rates and inflation rise. This is often associated with the perception of these stocks as being a ‘bond proxy’. The logic then flows that, just like a government bond, as interest rates rise, share (bond) prices fall as the present value of their ‘fixed’ future cash flows is now worth less.

This paper examines key aspects of this notion and finds that, contrary to common belief, infrastructure stocks can out-perform when interest rates start rising. We believe this is because key characteristics of many infrastructure stocks, especially the inflation protection in user-pay assets, facilitate earnings growth in a rising interest rate/inflationary environment. We contend that earnings from such stocks are not ‘fixed’ as is common belief, but rather often have a positive correlation with rising interest rates and inflation.

To examine the relationship between global listed infrastructure (GLI) stocks and interest rates we look at two scenarios:

Since December 2001 there has been one Fed Funds rate hike cycle (Chart 1); and three periods during which the T-Bond yield rose by more than 1% (in total) over consecutive months (ie. no months where the yield declined) (Chart 2).

Following the commencement of the Fed Fund rate hike cycle in May 2004, the S&P Global Infrastructure Index (S&PI) substantially out-performed the MSCI World Index (MSCI) over both 6 and 12 months (see Table 1).

As shown in Table 2, the MSCI v S&PI performance patterns post the commencement of a period of rising T-Bond yields have been consistent across each of the three such periods since 2001. The MSCI has out-performed the S&PI during the first 6 months post the yield increase, while the S&PI then recovers and out-performs over the next 6 months. 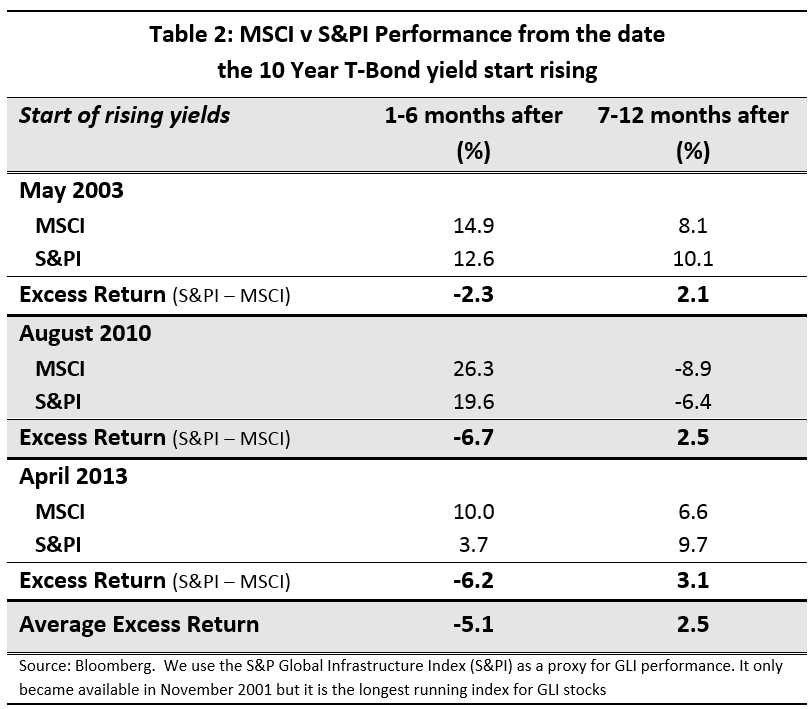 We believe this pattern of recovery by the S&PI is due to the attractive earnings features of infrastructure stocks, especially user-pay assets, more clearly manifesting over time. These stocks often have built-in inflation protection mechanisms in their business models. As interest rates/inflation increase over time, these protection mechanisms begin to kick-in and positively impact earnings. This then gets reflected in the relevant stock price and performance - as illustrated in the case study below.

We also believe this pattern of performance recovery by infrastructure stocks during a rising T-Bond yield/inflationary environment highlights the importance of active portfolio management. For example, the data above suggests that it would be appropriate to be over-weight user-pay assets during an escalating interest rate/inflationary environment. Indeed any initial price weakness in these stocks potentially represents a good buying opportunity.

This case study explores the impact of an assumed increase in Australian government bond yields of 1% and – as rising bond yields normally accompany rising inflation – an assumed 1% increase in inflation. How do these impact 4D Infrastructure’s (4DI) base case (current) 5-year earnings forecasts for a user-pay stock such as TCL?

The results (summarised in Table 3 below) show that TCL’s earnings before interest, tax, depreciation and amortisation (EBITDA) actually improve substantially when interest rates and inflation rose. 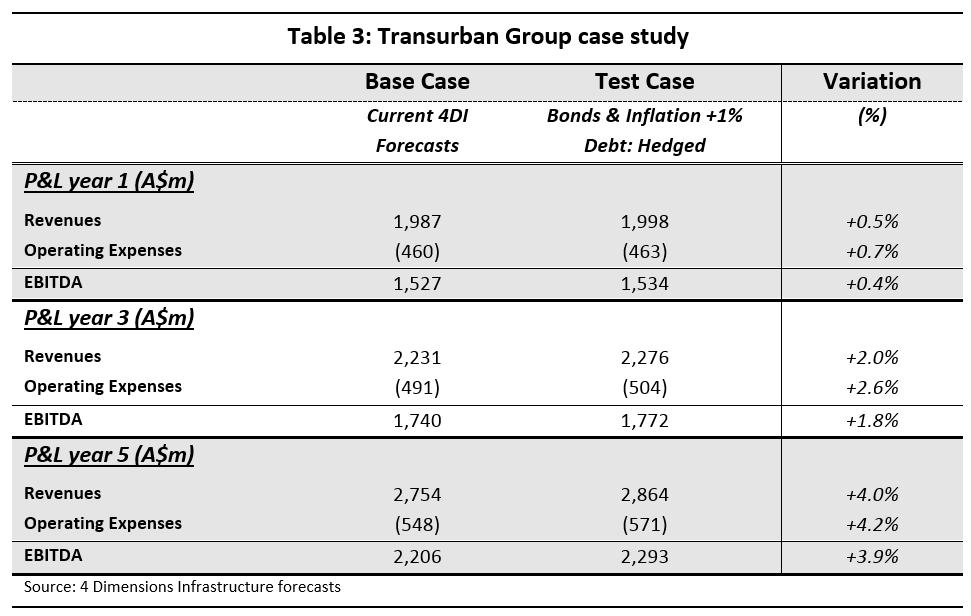 By year five, both revenues (+4%) and operating expenses (+4.2%) are higher in the test case. Forecast revenues increase because in ~80% of TCL’s toll road concessions they have the right to pass through inflation increases via toll escalations.[2] On the other ~20% of TCL’s road concessions they have the right to increase tolls by the higher of an agreed %, or actual inflation. In our Test Case we don’t change our Base Case revenue assumptions on this smaller portion of their portfolio as we have assumed the allowed toll escalation under the concession deeds exceeds our assumed inflation increase. Forecast operational expenditure increases due to the assumed inflation impact on costs.

Significantly, by year five, even though revenue and operational expenditure are both up by ~4% in the test case, EBITDA has also increased strongly by 3.9%. This reflects TCL’s powerful EBITDA leverage whereby EBITDA/revenue is ~80%. Hence a substantial component of any revenue growth flows through to EBITDA.

Cashflows after debt service are also up as TCL actively manages its balance sheet liabilities. Therefore, a 1% increase in the bond yield does not have a significant impact on TCL’s borrowing costs across the five year forecast period as the existing debt cost is largely locked-in.

Clearly there is more to the relationship between rising interest rates/inflation and the performance of infrastructure stocks than is commonly perceived. We draw a number of observations from this paper.

Firstly, infrastructure stocks substantially out-performed following the commencement of the last Fed Funds rate hike cycle. While there has been only one such period since 2001, as shown in Chart 1, it was an extended cycle seeing rates rise from 1% to over 5% between May 2004 and July 2006.

We believe that both of these strong performances by the S&PI can be attributed to the unique earnings characteristics evident in many infrastructure stocks. In particular user-pay assets with their ‘all seasons’ earnings attributes. As we demonstrate with our case study on TCL, stocks such as these often have built-in inflation/interest rate protection via their concession deeds. The other category of infrastructure stocks – utilities - has differing forms of earnings protection, such as frequent regulatory reviews where approved prices and volumes are reset as a result of changes in bond yields or inflation.

Accordingly, our strong contention is that earnings from infrastructure stocks are not ‘fixed’ as is common belief. Rather they can offer built-in protections which result in earnings, especially in user-pay assets, that often demonstrate a positive correlation with rising interest rates and inflation.

Finally, the varied stock performances we have observed across differing macro-economic backdrops demonstrate the importance of active portfolio management, and the ability to appropriately position an equity portfolio for the economic circumstances of the day.

[1] 4D define infrastructure stocks to be both user pay assets and regulated/contracted utilities. User pay assets include toll roads, airports, railways etc. where the user pays for the service(s) consumed. Utilities are typically regulated or contracted businesses, with monopolistic characteristics such as electricity/gas/water transmission and distribution companies.