As of 1 December 2020, we've changed registry provider for some of our funds. This may impact you – click here to find out more.

Global Matters: Listed infrastructure investment to 2020 and beyond (Part 2)

Greg Goodsell, Global Equity Strategist at 4D Infrastructure, looks at why the much needed increased investment in infrastructure, covered in Part 1 of this series, will lead to both an increase in government asset privatisations, and a bigger role for public equity markets in the funding solution.

In Part 1, we examined the fragile fiscal positions facing governments around the world, and why that will inhibit their ability to fund much needed infrastructure capex. Privatisation of public assets is one of the options cash strapped governments will turn to in confronting revenue pressures. It is also an important part of the public/private ownership transition mechanism that will lead to growth in listed infrastructure over the coming decades.

To illustrate this in practice we look at two current privatisation programs.

The Liberal Party successfully took this privatisation policy to the March 2015 NSW state election. In June 2015 the NSW parliament passed the enabling legislation for the privatisations. The State Government plans to lease, for 99 years, 100% of Transgrid, and 50.4% of Ausgrid and Endeavour, and it hopes to raise $20 billion from the privatisations to spend on road, rail and other infrastructure projects. (SMH, 4 June 2015)

While the major purchasers of these assets will likely be superannuation and/or unlisted infrastructure funds, some of the equity will find its way to the public market, either at the time of purchase or over the longer-term. So far, in NSW the lease of the transmission business TransGrid has been announced, with a value of A$10.3 billion.

The winning NSW Electricity Networks consortium included the ASX listed Spark Infrastructure (SKI). SKI will hold 15% of the equity (for an investment of A$734m), and is partially funding this holding via a A$405m equity entitlement offer to existing shareholders. (SKI, Retail Entitlement Offer Booklet, November 2015)

The NSW experience illustrates how privatisations can lead to an expanded role for private sector finance, including the listed equity markets, in the infrastructure funding mix. It also shows how governments, faced with fiscal pressures but recognising the need for infrastructure capex, are willing to adopt forward thinking policies as a means of delivering on those objectives.

Another privatisation program, in a very different form, is underway in the US water and waste-water (sewerage) sector. This industry is not only in need of substantial investment (for example, the US EPA estimates a capital investment program of US$633 billion is required over the next two decades to maintain and improve water and waste water facilities in the US) but is also extremely fragmented.

As shown in Chart 1 below, there are over 53,000 water systems in the US today, serving 300 million Americans. However, only 8% of the country’s systems serve populations of over 10,000, and a mere 1% of systems serve over 100,000 customers. This is a sector in need of consolidation.

Chart 1: Distribution of US water service provider by number of customers (% of total) 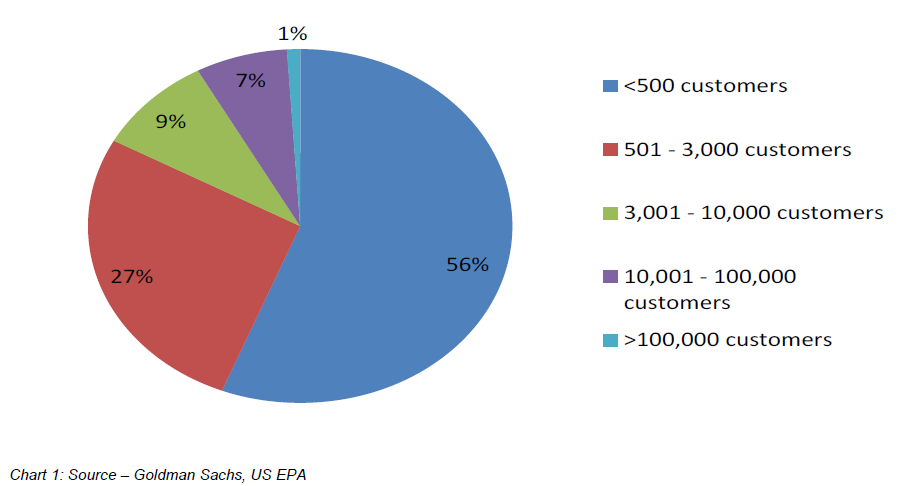 Many small local US water municipalities are facing significant challenges to replace ageing water infrastructure and spread the cost across small customer bases. Facing material customer bill increases, many public municipalities seek alternative solutions such as selling their asset/customer base to major, listed US water utility companies. These so called ‘tuck-in’ acquisitions are very attractive for the big listed US utilities. They are able to acquire new customers/assets at attractive prices, while substantially absorbing the costs associated with the acquisitions within their existing overhead base.

The US water experience illustrates both how privatisations can lead to an expanded role for public companies in the funding of infrastructure, as well how larger, more efficient private sector utilities can deliver essential services on a more cost effective basis.

2. Why will listed infrastructure perform an increasing role in the funding solution?

We believe the case for much needed global infrastructure investment to be increasingly funded via the public equity markets around the world is compelling. This is because the fundamental characteristics infrastructure assets offer are ideal for public market participation.

Over the past decade GLI portfolios of assets with these characteristics have delivered strong market performance across all cycles, lower volatility of returns and a strong dividend yield as illustrated in the following charts.

GLI has outperformed broader equities since 2004

Since 2004 (when GLI became more accepted as a separate asset class) the three major GLI indices have all outperformed the broader MSCI World index, as shown in Chart 2 below. 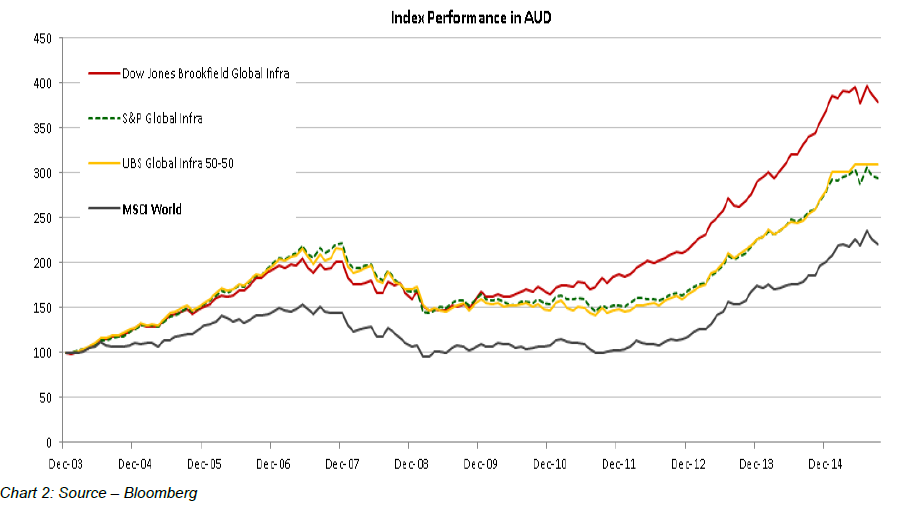 GLI has outperformed during the tough market months

An important feature of the GLI performance shown above is that it has been strong during the tough market months – when the broader market was flat or down. As shown in Chart 3 below, since January 2004:

(from January 2004, characterised by type of monthly market performance) 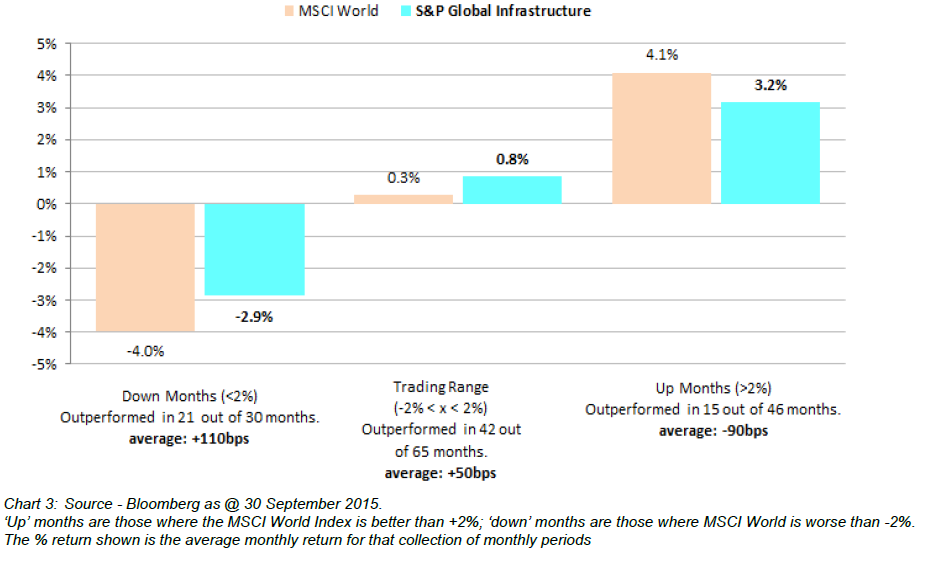 A further important feature of the performance of GLI is that returns have been accompanied by lower volatility as compared with the broader equity market, as shown in Chart 4 below. 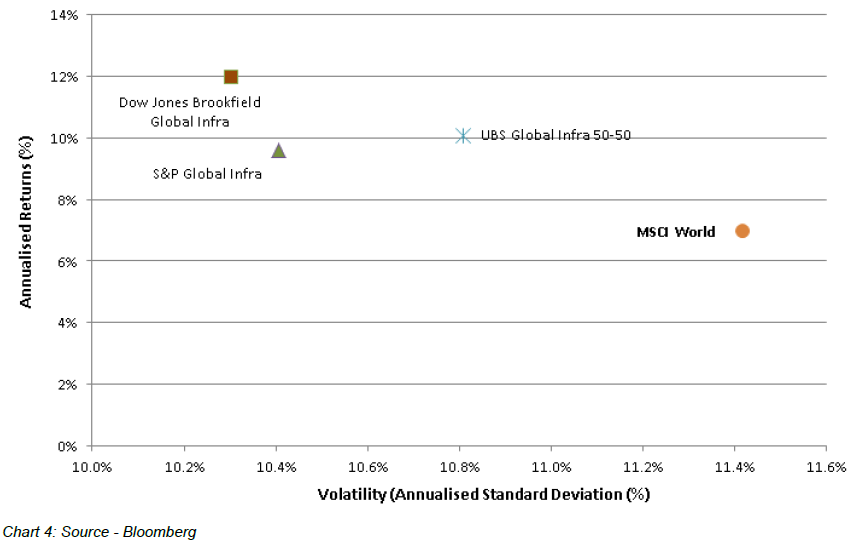 Finally the quality of earnings available from GLI stocks facilitates higher dividend yields as shown in Chart 5 below. 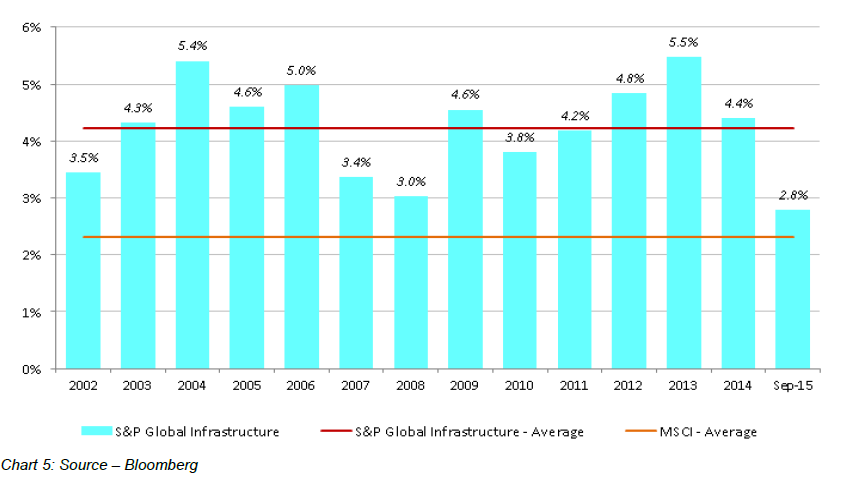 GLI’s strong historic performance, its capacity to out-perform in tough markets, with lower volatility of returns and strong dividends makes it, in our view, an asset class that is a valuable addition to all equity portfolios.

As shown in Chart 6 below, the GLI market capitalisation in 2006 was ~US$1.7 trillion with 220 companies. It is now ~US3 trillion, with around 300 companies. We believe this rapid growth trend will continue over the next 10 years.

Government fiscal positions remain fragile post the GFC, constraining their ability to fund necessary investment in often long neglected infrastructure. Privatisation of public assets is an important transition mechanism for increasing GLI’s share of the infrastructure funding mix. What’s more, the attractiveness of the sector to investors – evidenced by a strong historic performance – makes it well placed to continue on its growth trajectory, as it serves an increasing role in the worldwide solution to funding an ever expanding infrastructure need.