In December 2015, we published a paper looking at the need for infrastructure investment around the world and why we believed the private sector was going to be an integral component in how that growth would be funded.

Infrastructure investment across the globe is set to grow strongly over coming decades. We believe that growth will, by necessity, be increasingly funded by the private sector including via the global listed equity market. In this paper, we:

1. The driving forces behind the world’s insatiable need for infrastructure investment

Over the past 50 years there has been a chronic infrastructure underspend by governments across the globe. This has been driven by several factors, including governments looking for short-term electoral success and prioritising near-term fiscal handouts at the expense of longer-term investment. In addition, the global financial crisis (GFC) had a profound impact in changing government spending priorities away from investment towards then more pressing needs, such as propping up banking systems.

However, as the world increasingly moves out of the post-GFC shadow, there are numerous strong currents underpinning a need for infrastructure investment, including an ongoing period of synchronised global economic growth; rapid population growth; the emergence of the middle class; and China’s enormous ‘New Silk Road’ project.

Commencing late 2016/early 2017, we now live in a rare economic environment – one of synchronised global economic growth. The recovery looks to be strengthening and potentially even accelerating. This is illustrated in Chart 1, which shows only a handful of countries currently in recession with that number expected to drop further as we end the decade.

Economic growth in a country brings a number of consequences, including an expanding economy which itself demands new/better infrastructure arteries to support that growth and standard of living.

Despite an expected flat-lining in population growth in the developed world, the earth’s overall population is still anticipated to grow strongly for the remainder of this century as shown in Chart 2. In 1900 the global population was 1.65 billion, by 2000 it was more than 6 billion, and over the next 100 years an estimated additional 5 billion people are expected to inhabit the globe. 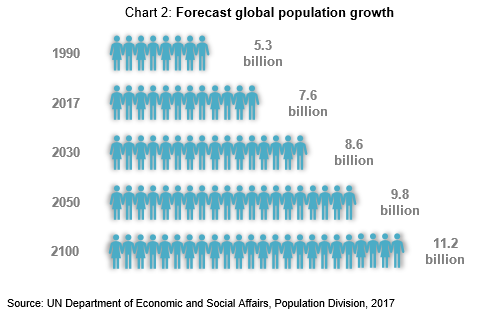 This anticipated population growth of course raises many critical issues, such as how all these people will be fed, housed, cared for and educated given the world’s finite resources. Maybe a somewhat more mundane – but ultimately important – issue is from where the funding will come to provide the necessary infrastructure to support a global population of this magnitude.

A recurring theme in our research over the past couple of years has been the importance of the emerging middle class, especially in Asia. The potential demographic changes and some of the possible consequences are depicted in Chart 3. 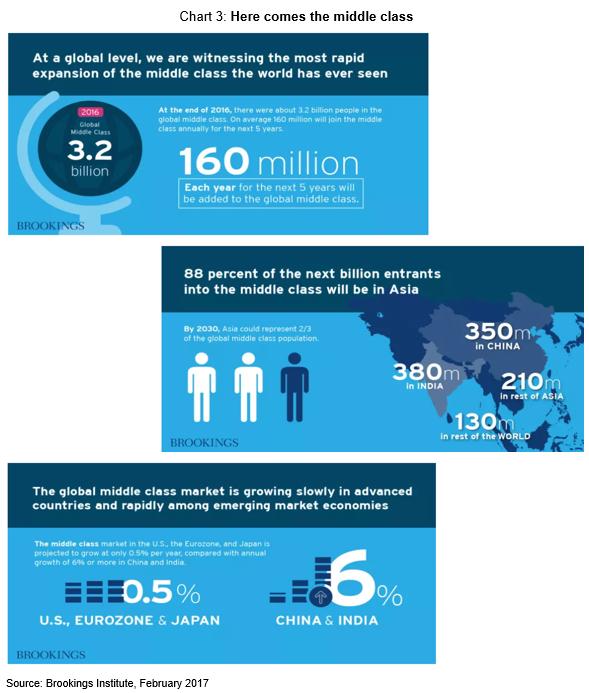 As indicated, the Brookings Institute believes, inter alia, the global middle class will grow by 160 million people per year for the next five years, with 88% of that growth occurring in Asia. In contrast, the middle class in the US, Eurozone and Japan is only expected to grow at 0.5% p.a.

We continue to believe the emerging middle class will be one of the most enduring investment themes for the remainder of the century. The consequences of this demographic change will be both profound and long-lasting, as illustrated below.

China and India have almost tripled their share of the global economy over the past 20 years, with growth expected to continue. As personal incomes rise the expected standard of living also rises, triggering a demand for new and improved infrastructure such as the supply of essential utilities – clean drinking water, waste water services and power. 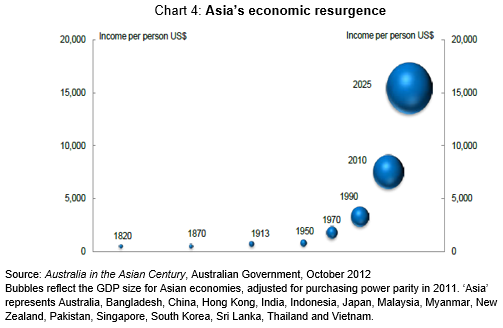 Chart 5 illustrates that as disposable income has grown in China, so too has the amount of travel undertaken by Chinese residents, both domestically and overseas. We expect this trend to continue and be exhibited more broadly across Asia. New improved airports/ports will be demanded by these newly affluent travellers domestically and internationally. 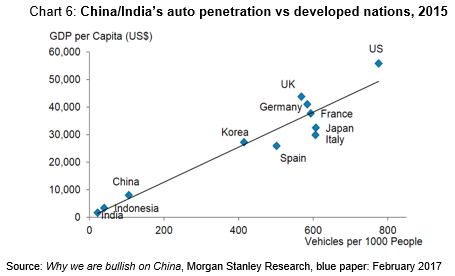 The new Silk Road in Asia, or more formally the Belt and Road Initiative (the ‘BRI’), is a major foreign policy and economic strategy of the People’s Republic of China. The term derives from the overland ‘Silk Road Economic Belt’ and the ‘21st-Century Maritime Silk Road’, concepts introduced by Chinese President Xi Jinping in 2013. These are the two major axes along which China proposes to economically link Europe and China through countries across Eurasia and the Indian Ocean. The BRI also links to Africa and Oceania. 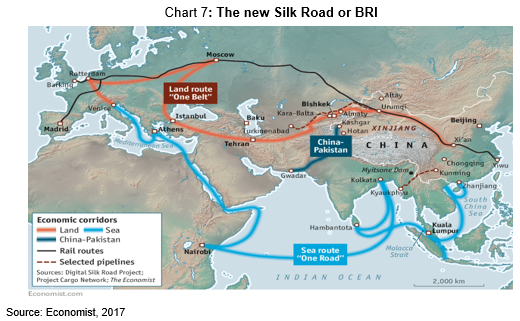 Formally, the BRI emphasises five key areas of international co-operation. However, it is the huge investment in infrastructure needed to facilitate the BRI’s trade objectives that has received the most attention. While the quoted numbers tend to vary, in broad terms China is spending roughly US$150 billion a year in the 65 countries that have signed up to the scheme[1], with potentially up to US$1 trillion[2] to be invested over the next five years.

BRI projects already stretch widely across Asia[3]. From Bangladesh to Belarus, railways, refineries, bridges, industrial parks and much else is being built. A new city is taking shape in Colombo, near Sri Lanka’s main port, with the total investment estimated at US$13 billion spanning about 25 years. China Merchants Port Holdings (CMH, a Chinese government majority-owned, listed port operator) owns the Colombo port and is backing a much-needed second terminal. CMH now owns ports across all five continents, facilitating global links. A freight route linking China’s east coast and London has already commenced operations. Stretching over 12,000 kilometres and passing through nine countries, the railway allows cargo to travel across the Eurasia continent in less than 20 days.

2. What do the investment ‘think tanks’ make of these growth factors?

Not surprisingly, the major institutions charged with putting numbers around the above themes come to very similar conclusions: much needs to be done!

US$3.7t pa needs to be spent on economic infrastructure out to 2035 (McKinsey Global) 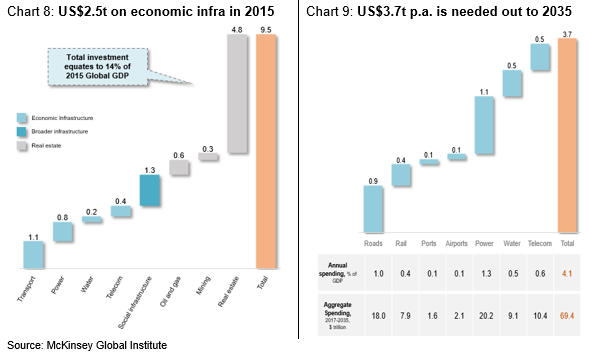 The Global Infrastructure Hub (part of the World Bank) estimates US$94 trillion needs to be invested by 2040 (Chart 10) and that, on an individual country basis, the investment shortfalls are significant (as shown in Chart 11). 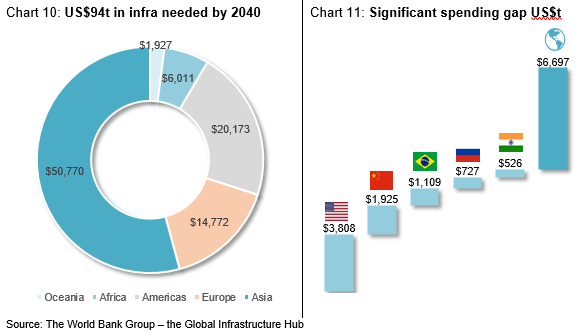 Case study of infrastructure in need: The US water & waste water (sewerage) sector

Clearly, the aggregate infrastructure investment task facing the world over coming decades is huge. As a means of illustrating this investment and replacement task at a micro level, Chart 12 shows an infrastructure case study on the United States water and waste water (sewerage) sectors.

The case of US water shows the infrastructure needed for an essential service (i.e. supply of clean, reliable drinking water) in the richest, most powerful nation on earth consistently being given a ‘D’ quality grade by its own American Society of Civil Engineers. The American Water Works Association (AWWA) estimates the investment needs for buried drinking water infrastructure total more than US$1 trillion across the US over the next 25 years. Some water pipes are approaching 100 years of age, and some are even reputedly still made of wood!

However, the US water sector is inappropriately structured to meet this huge investment task, with only ~16% of water assets and ~2% of waste water assets owned by the private sector. The public-sector owners (typically small, local municipalities) are not in a position to fund these huge capex needs and are increasingly selling their water assets and customer bases to the big private utilities in what are termed ‘tuck-in acquisitions’ (i.e. a relatively high number of small acquisitions – sometimes barely a few hundred customers at a time).

Clearly the task ahead in US water is huge and increasingly critical. 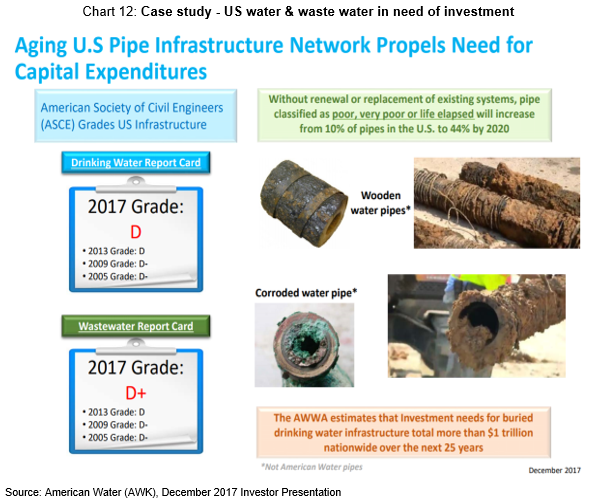 3. How will this much-needed infrastructure get funded?

The long-term, traditional provider of infrastructure has always been government. However, following the GFC and the funding demands that presented to the public sector, few nations are in a financial position to deliver on these clear and present infrastructure investment needs (illustrated in Chart 13).

At 4D, an important part of our investment process is our Country Reviews, which involve assessing a country in a similar way to how we research stocks. We assess each country based on its financial, economic and political risk, with the end result that each country is given a Country Grade of 1 (Green), 2 (Yellow) or 3 (Red) which then determines how much of our investment portfolio can be invested in stocks from that jurisdiction.

Chart 13 shows how the average debt/GDP ratio for each of our Country Grades has increased between 2012 and 2017. The point is that debt levels in virtually every nation have increased since 2012, despite a post-GFC economic recovery being underway and indeed a synchronised global recovery more recently.

Sovereign balance sheets remain stretched – they simply do not have the necessary financial firepower to fund all the infrastructure investment needed. 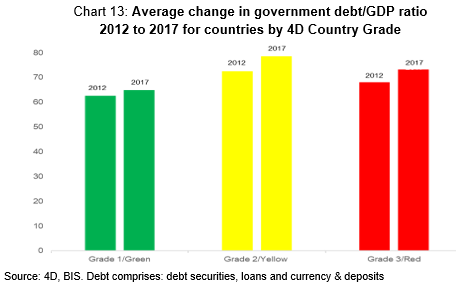 Private funding, including the listed market, is an essential part of the funding solution

The huge infrastructure demands facing the world will not be able to be funded by government in a manner similar to the past. By necessity much of the necessary funding will have to come from private sources, including the global listed equity market.

Indeed, US President Trump's plan to rebuild America’s infrastructure explicitly targets the private sector to provide the majority of funds. Mr Trump’s plan (announced on 12 February) to provide US$200 billion in Federal funding over 10 years is intended to attract a huge amount of additional money from US states, localities and private investors. The goal is to generate a total pot of US$1.5 trillion to upgrade the country's highways, airports and railroads. However, key to securing federal money for the project will be sponsors acquiring funding outside the government. At least 50% of the formula for choosing infrastructure projects for federal money is based on how successful the project has been in raising non-federal money.

Two years ago, we published a paper identifying a huge need for global infrastructure investment, and why we believed the private sector was an integral component in how that growth would be funded. Since then the investment task has only grown, as global growth, population expansion, demographic changes and policy initiatives (such as China’s New Silk Road) have taken hold. Yet government balance sheets remain stressed, and a major infrastructure financing need and opportunity is emerging for the private sector. Given the huge scale of the task at hand, we believe this theme will prevail for decades, albeit with even bigger future numbers. Infrastructure as an asset class and investment opportunity is set for a long period of rapid, inevitable and very necessary global growth.

[2] UBS, Patronomics; Does the Belt and Road Matter, September 2017

[3] Bloomberg, Chinese spending lures countries to its Belt and Road Initiative, 10 May 2017