The Australian Government recently released its plan to reach Net Zero emissions by 2050, finally joining the long list of countries already committed to achieving this target by 2050 or sooner.

The Plan, endorsed as ‘The Australian Way’, is underpinned by existing state and federal policies; supported by new concessional funding; and dependent upon future cost reductions through technology innovation. At the same time the government provided assurances that the country is on track to achieve its 2030 emissions reduction target.

In this article, 4D Infrastructure Investment Analyst Christopher James summarises the roadmap and explores how investors may be able to access the opportunity set it presents.

‘The Australian Way’  in a nutshell

What is Net Zero?

The 2015 Paris Agreement on climate change was historic in establishing awareness and momentum for environmental change, with signatories aiming to limit global emissions to Net Zero in the second half of the century. The ultimate goal of such initiatives is to limit global warming to well below 2 (preferably 1.5) degrees Celsius compared to pre-industrial levels. It is a mammoth task, to say the least, and needs support from governments and the populace to balance the often-conflicting goals of environmental sustainability while still fostering population growth, economic advancement and social ideals.

According to the Federal Government’s projections, Australia is on track to reduce emissions by up to 35% by 2030, above the existing target of 26-28%. This improved trajectory is due to anticipated faster reductions in emissions from electricity generation, which will be almost entirely driven by state-based policies. Despite the reductions achieved to date and the trajectory outlined, the government has not revised the 2030 target in the current 2050 Plan due to heavy resistance from members of the National Party. However, achievement or outperformance of the 2030 target will assist in delivering the goal of Net Zero emissions by 2050. 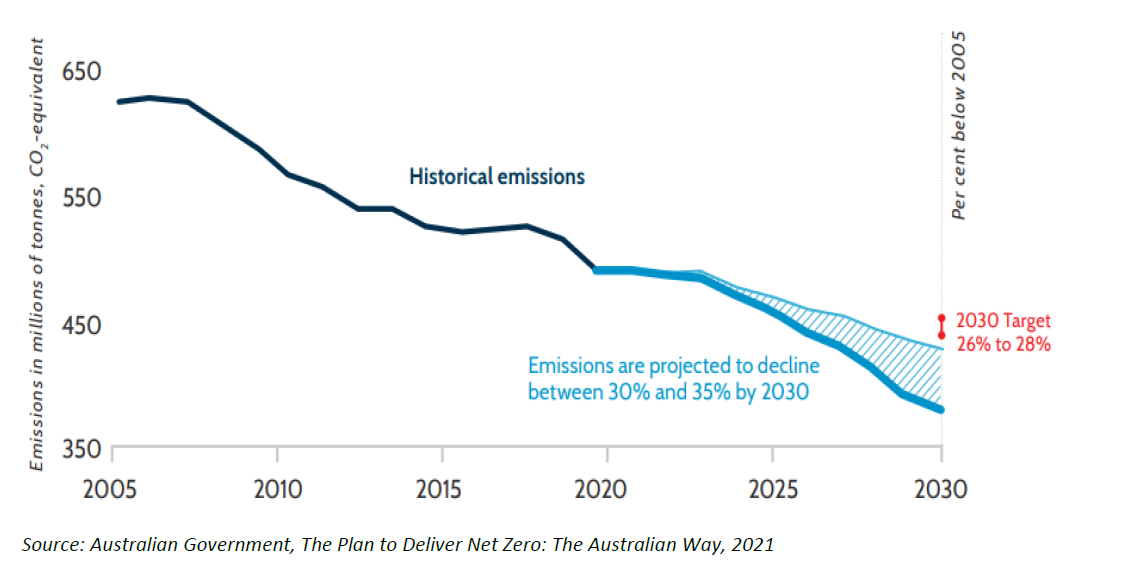 Despite the above commitments and achievements, based on the assessment in the ‘Climate Transparency Report’ Australia is ranked among the worst nations for climate action relative to other OECD countries[1]. Several major developed countries have pledged much deeper annual cuts to reach ~50% by 2030 as shown in the table below. 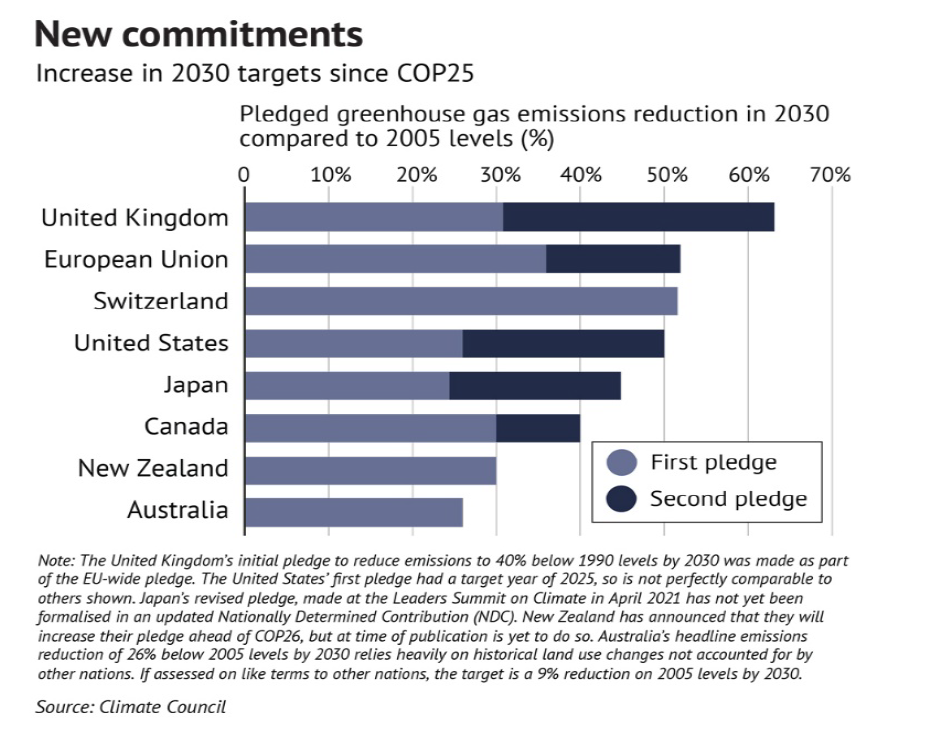 This disappointing showing on the global stage finally saw the government address pushback and release a 2050 plan providing a more detailed roadmap to Net Zero. But is it enough?

In October 2021, ahead of the UN Climate Change Conference of the Parties (COP26), the Australian Commonwealth Government finally committed to a long-term emissions reduction plan to deliver Net Zero emissions by 2050. Prime Minister Scott Morrison has promoted the plan as ‘The Australian Way’.

Having achieved ~20% in emissions reduction to date relative to 2005 levels, the Plan builds on existing state and federal policies, concessional funding, offsets and technology innovation to guide Australia to Net Zero. The Plan outlines how Australia will achieve 85% of its emissions reductions, while it is believed the residual 15% requires future technology breakthroughs to be achieved. Australia is not alone in relying on technology advancement in order to achieve Net Zero goals.

Like the 2030 target, the Plan will not be legislated, thus relying on the Commonwealth, states, territories, consumers and companies to drive emission reductions. Australia’s targeted emission reductions by category to 2050 are reflected in the chart below.

Australia’s targeted emission reductions by category to 2050 are reflected in the chart below. 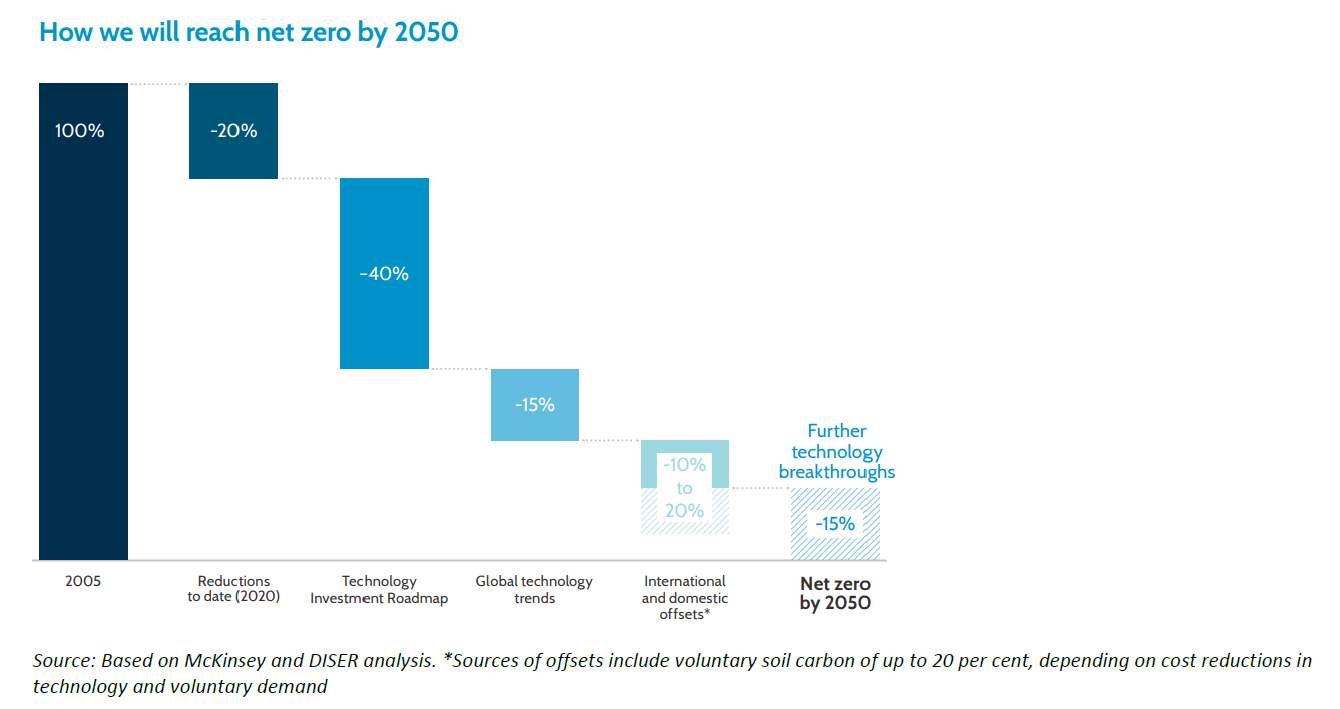 The starting point for the roadmap to Net Zero is that Australia has already reduced emissions by ~20% on 2005 levels. Most of the reductions have come from changes in the land sector, with the remainder largely from the rollout of renewable energy in the power sector.

Under the Plan, the bulk of the emission reductions (~40%) will be delivered through the Technology Investment Roadmap (the ‘TIR’), which is itself a collation of concessional funding, research and innovation projects. The TIR initiative, which was conceived in September 2020, provides a framework that prioritises investment in new and emerging technologies, aiming to accelerate development and commercialise low emission solutions. The TIR includes an A$1.9bn investment package to be deployed over the next decade towards funding future technologies to lower emissions. While priorities will be continuously reviewed, the initial focus and goals will be directed towards:

The Plan also added ultra-low cost solar to its list of priorities, with the goal to generate solar electricity at $15/MWh, around a third of today’s cost.

For these ambitious goals to be achieved, the Plan relies on a combination of further supply chain development, large-scale deployment and installation of more renewable generation capacity and further technology innovation to facilitate the reductions in the costs required to make these feasible.

The Plan anticipates that current available technology will deliver up to ~15% in emission reductions. This refers to initiatives already viable and underway, such as the electrification of transport, the staged retirement of coal generation, renewable/low emissions generation installations and development of supply chains.

A further 10-20% in reductions will be met through abatement from international and domestic offsets. Abatements are emissions reduction units generated by real projects/initiatives which promote sequestration – that is, the prevention, reduction, removal or capture of emissions from the atmosphere. Common activities include, but are not limited to, renewable generation, energy efficiency, emissions capture, reforestation and other vegetation management practices. A surplus of units creates credits, which can be traded on a domestic and international scale.

Abatements have a legitimate place in reducing greenhouse gas emissions, so long as the underlying emissions reductions are genuine as they have the same effect on global climate outcomes as domestic reductions. Voluntary abatement action under the plan is expected to cost up to $24/t CO₂-e basis, while international offsets are available to the Australian economy at the global price, $40/t CO₂-e.

The Plan recognises the need for real investment in low emissions technology, at the same time highlighting that there are currently significant cost differentials and limitations which hinders the ability for such technologies today to fully bridge the gap to Net Zero in a socially acceptable way. Future technology breakthroughs will therefore be vital in bridging the cost barrier to a point of parity with higher emitting alternatives, to provide both economic and practical solutions. The Plan anticipates that new and emerging technologies will reduce emissions by a further 15% through to 2050. In addition to the six priority technologies outlined above within the TIR, the other high potential emerging technologies under consideration are:

To facilitate the Plan, significant investment is required. The Federal Government will provide A$20bn for investments in low emissions technology, which is expected to unlock a total of A$80bn in private and public investment. The Plan includes five-yearly reviews that will enable the evaluation of progress and adaption for any technology advancements.

Decarbonisation must happen, and the goal of Net Zero is just not achievable without the right forms of infrastructure investment across both the energy and transport sectors. This represents a significant opportunity for infrastructure investors, such as 4D, who want to be part of the climate solution.

In Australia, numerous infrastructure owners and operators are committed to climate change action, though building and operating sustainable infrastructure. Transurban, Sydney Airport, APA and even Aurizon (coal-freight operator) all have Net Zero emission ambitions by 2050 or earlier, on which we can capitalise.

Moving beyond the domestic listed market, key global listed infrastructure operators are also looking to capitalise on Australia’s new Net Zero Plan, including Iberdrola out of Spain which continues to build its renewables footprint in the country; Italy’s Enel through its solar generation portfolio; Canada’s ATCO which operates one of the most efficient and environmentally friendly gas-powered generation facilities; and Neoen from France, which was responsible for the world’s first big battery (150 MW/193.5 MWh) in Hornsdale, South Australia.

4D manages a diversified portfolio of stocks across the utility and transport sectors. We prioritise both countries and companies with strong management teams, defined strategic environmental goals that integrate with an ESG policy and strong balance sheets to support much-needed investment, and those that are best in class within their sector in building a sustainable infrastructure footprint. This applies whether it be pure play renewable operators, toll roads supporting electric vehicles and a reduction in congestion, or airports that are themselves targeting Net Zero.

To receive CPD points for reading, view this article on AdviserVoice’s website and complete the questionnaire.