Inflation looks to be very slowly emerging from a long slumber and interest rates are heading north. This has significant implications for the world’s economy and global equity markets.

Greg Goodsell, Global Equity Strategist and Chris James, Investment Analyst from 4D Infrastructure, investigate this issue and conclude there is much more to the story than meets the eye. The answer lies in looking more closely at infrastructure as an asset class, its constituents and their characteristics, and understanding that, with active management, an infrastructure portfolio can be positioned to perform well in a rising rate environment.

The first step in understanding the potential implications of a rising interest rate environment for an infrastructure portfolio is to break down the infrastructure asset class into its two broad constituents: User Pay and Regulated Utilities.

By their very function, User Pay assets are geared to capture GDP growth and wealth creation. Typical User Pay assets are toll roads, airports and ports, whereby the user pays to use the asset. These stocks have a direct positive correlation with GDP growth (volumes) and often have built-in inflation protection mechanisms in their business models (tariffs). As interest rates/inflation increase over time, these protection mechanisms begin to kick in and positively impact earnings. This is then reflected in the relevant stock price and performance.

In addition, management at these companies have generally been actively locking in medium to longer-dated borrowings over the past several years during this extraordinarily long period of very low global interest rates. As a result of these borrowings, higher interest rates do not have an immediate earnings impact.

In contrast Regulated Utilities, such as electricity, water and gas providers, are more immediately adversely impacted by rising interest rates/inflation because of the regulated nature of their business. For a regulated utility to recover the cost of higher inflation or interest costs, it must first go through its regulatory review process. This involves making submissions to the regulator arguing that prevailing economic conditions have changed and they should be entitled to recover those increased costs via increased rate charges to their client base. While a regulator is required to have regard for the changing cost environment the utility faces, the process of submission, review and approval can take some time. In addition, the whole environment surrounding costs, household rates and utility profitability can be highly politically charged. As a result, both the regulatory review process and the final outcome can be quite unpredictable.

Having established the premise that User Pay assets offer some protection from rising interest rates and inflation while Regulated Utilities are more vulnerable, we can test this thesis by examining how these two distinct asset sub-sectors have performed during previous periods of rising interest rates. We therefore look at two scenarios:

Rising interest rate cycles in the US since 2000

Since 2000 there have been two Fed Funds rate hike cycles (Chart 1) and three periods during which the US T-Bond yield rose by more than 1% over consecutive months (Chart 2).

3. Can User Pays outperform in periods of rising interest rates?

To test the thesis that User Pay assets can outperform in periods of rising interest rates/inflation, we:

To better understand the performance behaviour of the indices, we separate performance of the first six months and second six months (i.e. months 7–12) after rates start increasing. The results of our analysis are also illustrated in the attached charts.

As shown in Chart 1, since 2000 there have been two periods in which the US Fed Funds rate rose by more than 1% over consecutive months. The performances of our infrastructure indices vs the MSCI over these periods are shown in Table 1 below. 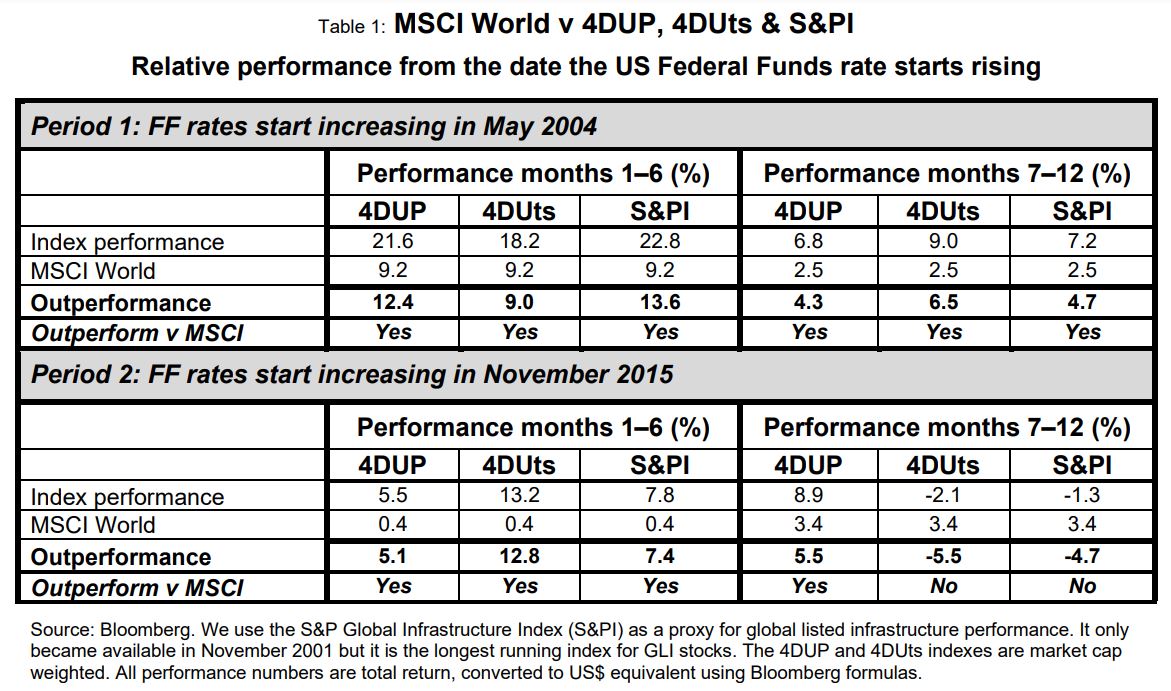 This is also illustrated in the following charts. 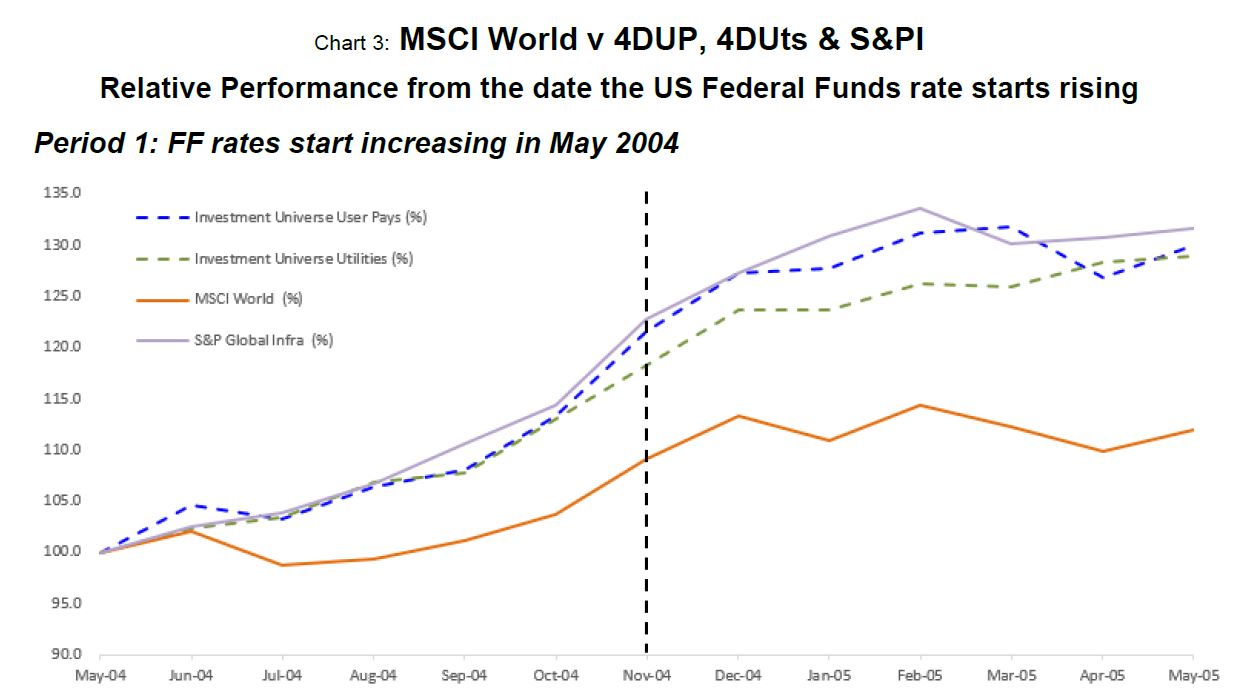 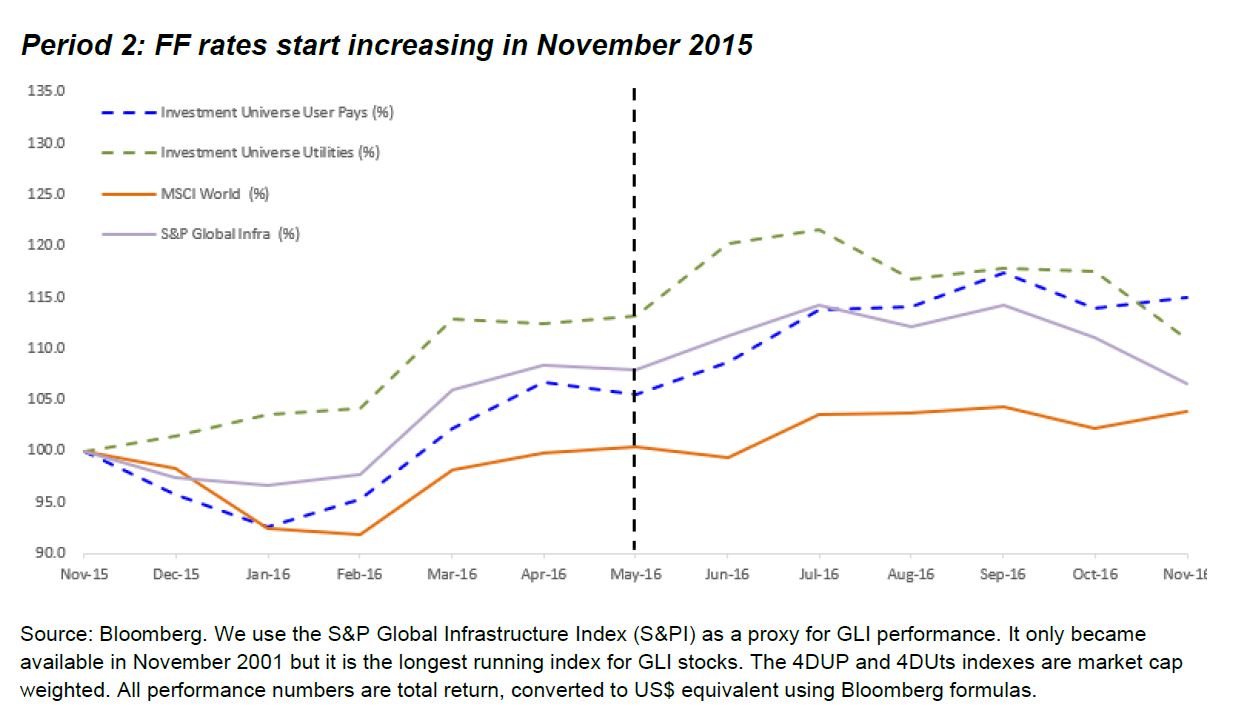 As shown in Chart 2, since 2000 there have been three periods during which the US T-Bond yield rose by 1% over consecutive months. The performance of our infrastructure indices over these periods is in Table 2 below. 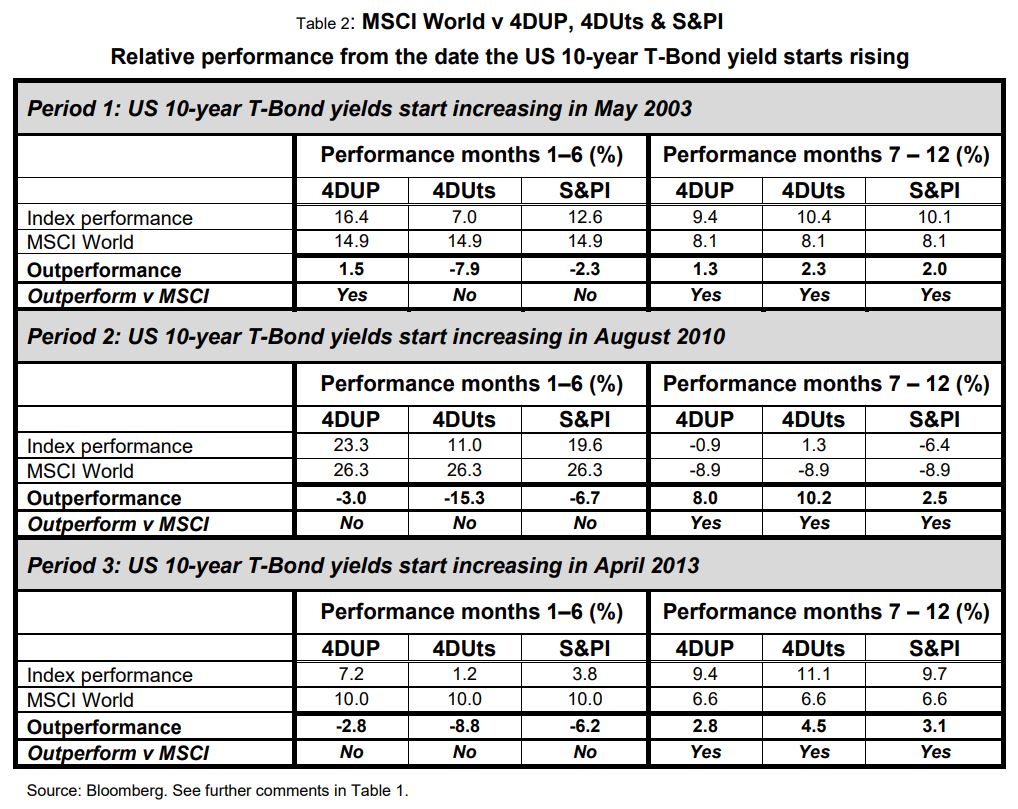 Table 2 suggests that rising US bond yields are far more influential for listed infrastructure equity market performance than are increases in the US Fed Funds rate. Notably:

This suggests to us that, in a rising rate environment, a portfolio should be weighted to User Pays.

These outcomes are illustrated in chart 4 below.

This case study explores the impact of an assumed increase in Australian and US government bond yields of 1%, and – as rising bond yields normally accompany rising inflation – an assumed 1% increase in inflation. How do these impact 4D’s base case (current) five-year earnings forecast for a User Pays stock such as TCL?

The results (summarised in Table 3 below) show that our forecasts for TCL’s earnings before interest, tax, depreciation and amortisation (EBITDA) improve when interest rates and inflation rise. 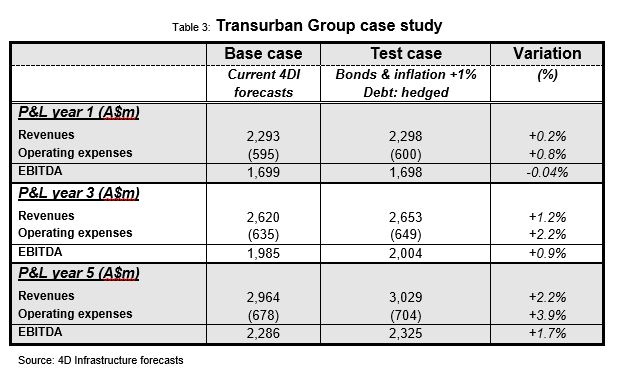 By year five, both revenues (+2.2%) and operating expenses (+3.9%) are higher in the test case. Forecast revenues increase because in approximately 80% of TCL’s toll road concessions they have the right to pass through inflation increases via toll escalations.[2] On the other 20% of TCL’s road concessions they have the right to increase tolls by the higher of an agreed percentage, or actual inflation. In our test case we don’t change the base case revenue assumptions on the smaller portion of their portfolio, as we have assumed the allowed toll escalation under the concession deeds exceeds our assumed inflation increase. Forecast operational expenditure increases due to the assumed inflation impact on costs.

Significantly, by year five, even though revenue and operational expenditure are both up by 2-4% in the test case, EBITDA has also increased strongly by 1.7%. This reflects TCL’s powerful EBITDA leverage, whereby EBITDA/revenue is approximately 80% – hence a substantial component of any revenue growth flows through to EBITDA.

Clearly there is more to the relationship between rising interest rates/inflation and the performance of infrastructure stocks than is commonly perceived.

This suggests to us that User Pay assets should be the preferred holding over Regulated Utilities in periods of rising interest rates and strong growth.

Finally, the varied asset characteristics and performance that we have observed across differing macro-economic backdrops demonstrate the importance of active portfolio management, and the ability to appropriately position an equity portfolio for the economic circumstances of the day.

Infrastructure: an asset class for all stages of a market cycle

So, to conclude: is infrastructure a bond proxy?

We believe this notion is far too simplistic. The inherently different asset characteristics of User Pays vs Regulated Utilities, and the performance they deliver, mean infrastructure is an asset class that can be tailored to all stages of a market cycle. User Pay assets facilitate a portfolio being positioned for a GDP growth/rising interest rate/inflationary environment. Conversely, in more difficult economic times, possibly incorporating falling interest rates, Regulated Utilities offer an ideal defensive home given their earnings certainty, which are largely immune to the macro cycle.

The content contained in this article represents the opinions of the authors. The authors may hold either long or short positions in securities of various companies discussed in the article. The commentary in this article in no way constitutes a solicitation of business or investment advice. It is intended solely as an avenue for the authors to express their personal views on investing and for the entertainment of the reader. In particular, this newsletter is not directed for investment purposes at US persons.