Consistent with trends in past budgets, the 2021 Federal Budget saw the Commonwealth Treasurer identify a further A$15.2 billion in new spending on major infrastructure projects, keeping the decade-long infrastructure investment program at A$110 billion. This will spearhead the Federal Government's efforts to boost both jobs and productivity in the COVID-affected national economy. 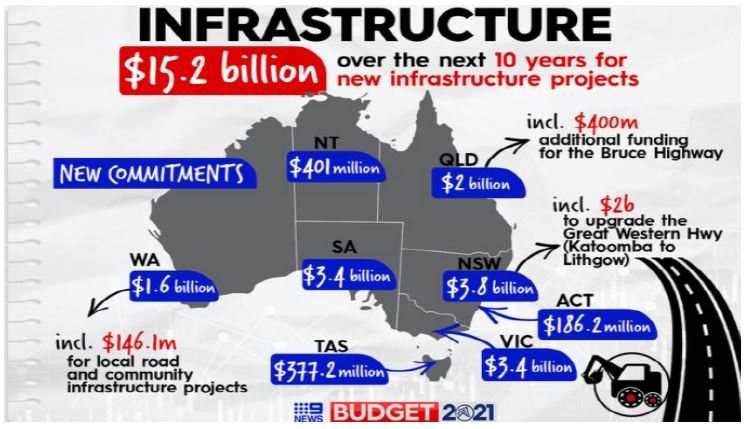 Following are our observations in relation to the infrastructure commitments, and the Budget more generally.

Firstly, investment in the nation’s infrastructure improves the economy’s ‘arteries’, aiding economic growth and job creation. As we emerge from COVID-19 this will be critical in the economic recovery.

All the infrastructure spending announced in the 2021 Budget is very much designed to achieve the goal of making the economy more efficient and productive. For example, the A$2 billion upgrade to the Great Western Highway between Katoomba and Lithgow in NSW will have the effect of reducing transit times and costs for freight movement, allowing the economy to operate more efficiently.

Global infrastructure investment has also been on the rise. President Biden, for example, has announced ‘The American Jobs Plan’ – a US$2.25 trillion plan to rebuild infrastructure and reshape the economy in the US – and the EU has passed a 7-year €1.1 trn (US$1.3trn) budget and a €750bn (US$900bn) Next Generation EU recovery plan (both of which are strongly focused on green investment to fight climate change).

A November 2020 IMF research paper argues that a synchronised global infrastructure investment push could invigorate growth, limit scarring and address climate goals (see chart below). The IMF believes that, when many countries act at the same time, public infrastructure investment can help lift growth domestically and abroad through trade linkages. This positive ‘spill over’  effect could provide an additional boost to global output.

The IMF also argues that ‘spill overs’  created by higher demand have a greater impact when economic conditions are weak and interest rates low. When economic conditions are strong, higher government spending may push inflation above the central bank’s target and trigger a monetary policy tightening, offsetting some of the initial boost to demand. But when conditions are weak and inflation is well below target, as in the current global economic environment, monetary policy is less likely to tighten in response to higher government spending, resulting in a greater output response. The context of ample spare capacity thus amplifies the impact of both domestic public infrastructure spending and the demand that spills over from higher public investment abroad. 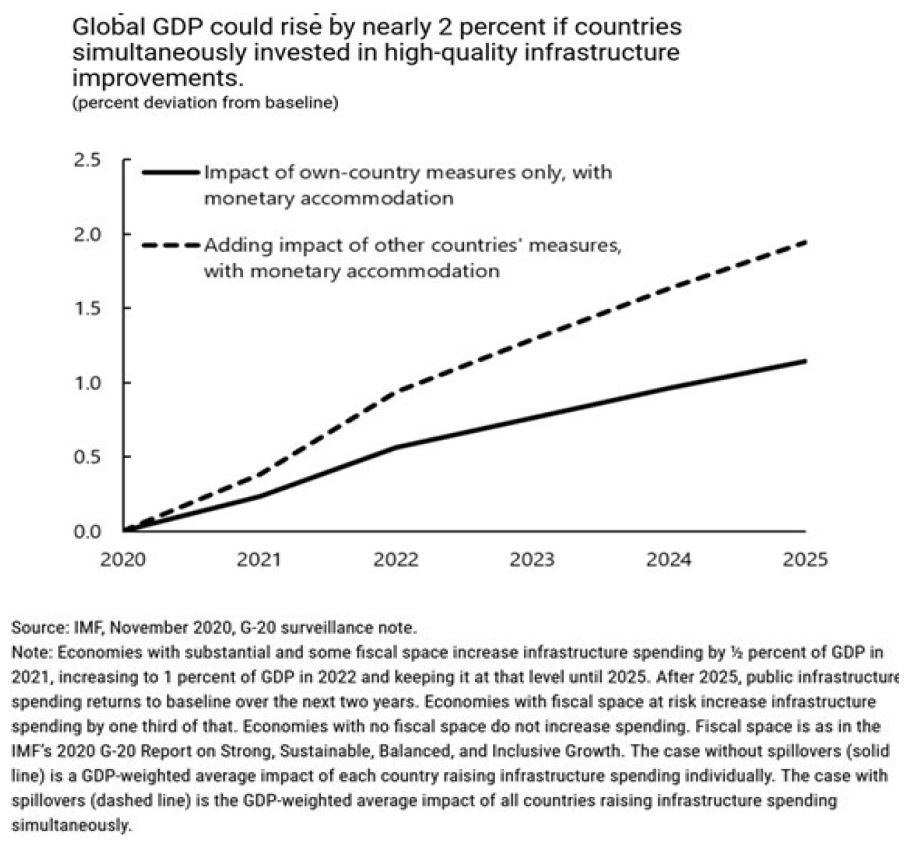 Government infrastructure spending also lays the groundwork for a pool of potential future privatisation candidates once the assets are fully developed, leading to growth in the infrastructure asset class. While this budget did not announce any headline-grabbing new ‘mega’ project privatisations, there were some developments worth noting, including:

These rail improvements are likely to be funded through, and owned by, the Australian Rail Track Corporation (ARTC). The ARTC is a Commonwealth owned statutory corporation, established in July 1998, that manages most of Australia’s interstate rail network – around 8,500 kilometres of track. The ARTC charges ‘above track’  rail companies for the track ‘service’  provided. It is a clear ‘User Pays’  asset that could be a privatisation candidate.

The 2020 Budget disclosed a future equity injection into the ARTC to deliver the A$10 billion Melbourne-to-Brisbane Inland Rail project.The Inland Rail will be principally freight, and there are profitable and successful freight-oriented private railways all over the world.

Combining the ARTC’s existing business with the Inland Rail and the additional rail upgrades announced in the 2021 Budget would potentially make it an attractive privatisation option.

In addition, other potential future privatisation candidates from previous Budgets and policy announcements include:

2. Has there been a fundamental change in the Australian Government’s ‘debt and deficit’ philosophy?

For as long as we can remember, and certainly since Gough Whitlam’s ‘Dismissal' election defeat of 1975, ‘debt and deficit’  management has been a key political battleground, especially in Australian Federal elections. The mantra has always been that Conservatives are ‘better’ at managing debt and deficit than Labor. Indeed, with the notable exception of the Hawke/Keating era, this belief has delivered many Liberal/NP Federal election victories and has been an extraordinarily persuasive argument. We published an article on this topic in June 2016.

Well, there is no doubt the bottom-line budget position is much better than what had been previously forecast. In and of itself, this would allow the Government to again claim bragging rights on debt and deficit management. The underlying cash deficit is forecast at A$161 billion in 2020-21, A$37 billion better than forecast in the December 2020 Mid-Year Economic and Fiscal Outlook. However, the Budget is still very expansionary and the size of the ongoing deficits are substantial.

So, what might be the thinking behind this potential philosophical political change?

The Government maintains this is a ‘pandemic'  budget with significant spending designed to lock in the economic recovery. This is no doubt a fair argument, but we would also offer a few additional comments in this regard: 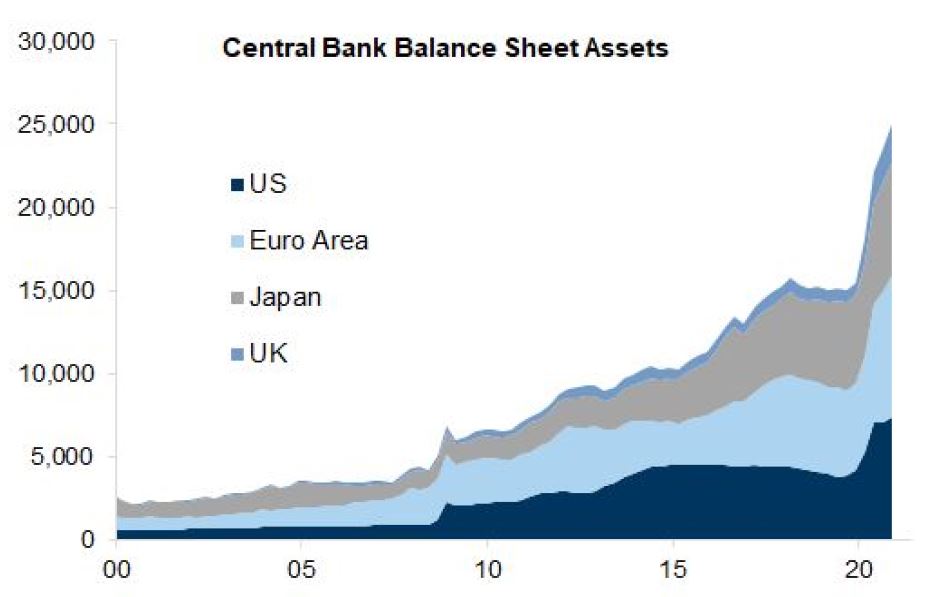 Whatever the reasoning and rationale, there does seem to be greater acceptance of a higher debt and deficit policy by the current Australian Government. Whether it continues to be adopted and proves to be a correct and sustainable long-term position remains to be seen, as traditional economic convention would hold that there is a price to pay for this ‘loose'  fiscal policy – typically in the form of inflation and higher interest rates. At a minimum the policy certainly represents a significant change from the past, especially for Conservative governments, and lays the ground for an interesting next Federal election.

3. Finally, a bit of perspective on budget infrastructure spending promises

However, unfortunately public sector reporting generally does not provide clear accountability or visibility for these promises. The question is always if or when the money actually gets spent, and whether this year’s promises represent incremental spending or are, at least in part, just a re-packaging of earlier commitments.

Figures compiled by the Australian Automobile Association (AAA), the national umbrella group for Australian motoring clubs and their 8.5 million members, show that over the past five federal budgets, there has been a total shortfall of $4.4 billion. And that’s just for roads.

Further, while a A$110bn (US$85bn) 10-year infrastructure plan may sound quite impressive, it still falls far short of global ‘stimulus’ driven infrastructure programs in absolute terms and as a percentage of GDP. For example, compare our 10-year A$110bn (US$85bn) plan to President Biden’s US$2.25trn plan to rebuild infrastructure and the economy; or the EU’s 7-year €1.1 trn (US$1.3trn) budget and €750bn (US$900bn) Next Generation EU recovery plan. Even compared to our more like-for-like peer, Canada, we fall short relative to their C$70-100bn 3-year plan.

Taking this a step further, one of 4D’s top 10 investment positions, Iberdrola (Spanish listed utility), has a €75bn (US$90bn) 5-year investment plan and a €150bn (US$180bn) plan over 10 years. That is a single company spending more than twice that of the Australian government in infrastructure deployment over the same period – and they will be held accountable. Putting it in this context, the A$110bn (with little accountability) seems a bit light.

We at 4D believe there is no economic recovery without roads, railways, pipelines, power transmission networks, communication infrastructure, ports and airports. Infrastructure should be, and is, a key component of the post COVID-19 stimulus and we welcome the 2021 Federal Budget’s infrastructure initiatives, although we wish they had gone further.