In this article, 4D Infrastructure’s Peter Aquilina and Greg Goodsell review the US midstream sector and identify a number of changes underway which they believe will see the creation of real shareholder value over the medium term.

Assets, and asset sectors, can and do change and evolve over time. Individual asset characteristics can change quite markedly, often driven by external forces (eg. a market sell-off, or a changing operational environment) and those changes are then facilitated by management action. This evolutionary process can create opportunities for investors to deliver strong returns provided they understand the asset and the sector, can identify early-on the underlying trends, the state of the reform process and hence the opportunities available. We believe such an evolutionary/reform process is currently underway in the United States midstream sector creating real investment opportunities.

What is US midstream?

We at 4D Infrastructure define the ‘midstream’ sector as the infrastructure used in the transportation, storage, extraction and refining of natural gas, Natural Gas Liquids (NGLs) and crude oil. Midstream is the ‘glue’ between upstream E&P and downstream distribution.

The graphic below shows that there can be an extensive infrastructure value chain to transport commodities from the site of extraction via gathering lattice networks to processing plants, and to downstream markets via large volume transportation pipelines. At downstream terminals the commodities can be transported to the end customer via pipeline, rail or ship; refined at fractionation facilities; and stored or further manufactured.

Midstream assets are therefore heterogeneous by nature. For 4D, the investability of these stocks is determined by the quality of their assets, the contractual basis on which they are remunerated, and whether the asset characteristics meet our infrastructure definition. Historically, a number of these companies were ‘fringe’ under our definition. However, this has changed a lot over the last few years.

As shown in the table below, assets under the midstream umbrella perform a number of functions and have differing business risks and characteristics. 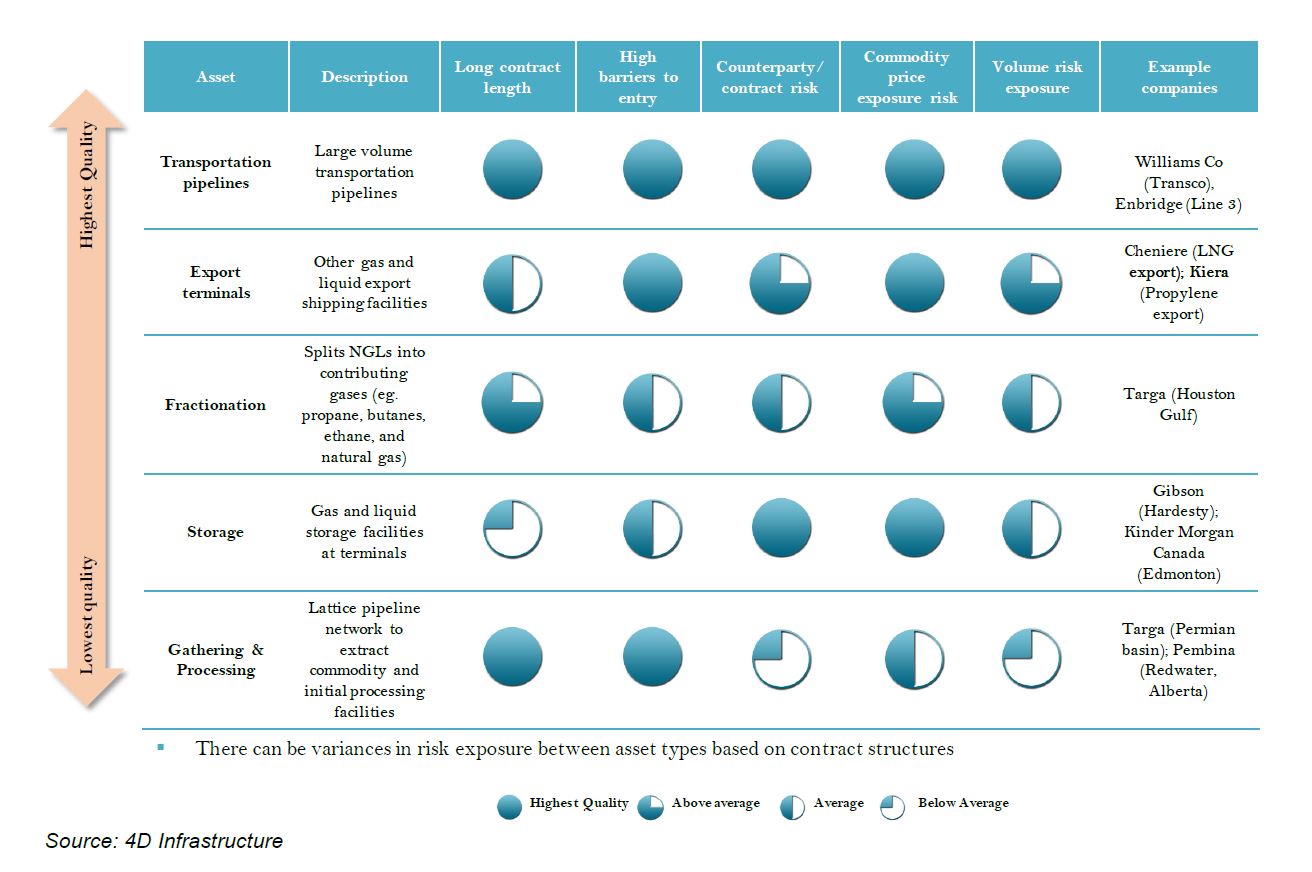 So what went wrong for the midstream companies?

As shown in the chart below, from around 2015 midstream stocks experienced significant share price reductions, wiping substantial value from investor portfolios. Retail and generalist investors fled the sector due to concerns regarding the credit of companies, earnings disappointments from commodity exposure, and dividend cuts undertaken by management.

These credit issues affecting companies were themselves driven by the following management sins:

Recognising that the earnings volatility and poor performance of the sector needed to be addressed, management undertook a number of reforms as summarised in the table below: 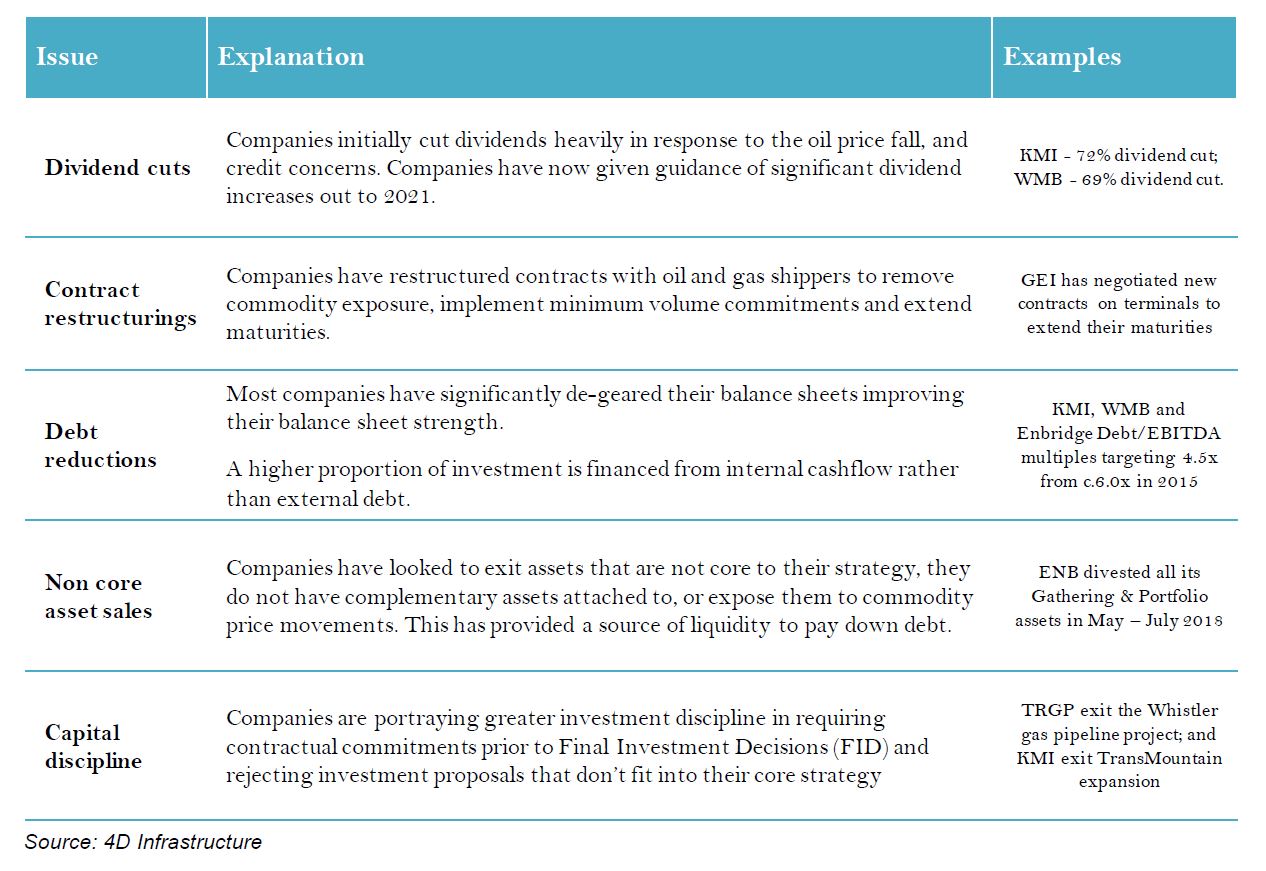 Significantly, management looked to re-negotiate contracts to reduce commodity exposures and sell assets that had less predictable earnings streams. They also became noticeably more cash conservative by selling non-core assets, reducing dividends and de-gearing balance sheets. These actions were welcomed, given where the sector had deteriorated to by 2015.

As a result, the midstream companies are now in far better shape as illustrated in the table below.

Management teams have also announced plans to significantly increase dividends and repurchase shares over the course of 2019 and 2020 as cashflow generation increases (outlined in the graph below).

Structural changes should attract the interest of other investors

All of the above are very positive initiatives, and should have the effect of attracting infrastructure investors such as 4D. These restructured midstream assets now exhibit many, if not all, of the characteristics we look for in infrastructure assets.

4D defines ‘infrastructure’ as the owners and operators of regulated and/or user pay assets with the following attributes:

It is clear that the ‘new’ midstream asset profile has many of these characteristics, such as monopolistic market position, visible and resilient earnings, strong cash generation, long dated assets and acceptable levels of gearing.

This is the opportunity for investors!

So far, the listed market has not fully recognised the changes that have occurred in the structure of the midstream sector. For example, as shown in the charts below, a basket of listed midstream shares is valued significantly below that of recent private market transactions in the sector based on EV/EBITDA multiples. It looks as if private equity has been quicker to react to the fundamental changes to the sector that we describe above. Accordingly we believe there is still investment value available in the US midstream sector.

We were concerned with the historic structure of the midstream model and had very little exposure throughout 2016. We have been observing the reforms to the sector and building our portfolio positions in a calibrated manner, consistent with the speed and execution of the reforms.

In selecting our holdings, we at 4D have based our portfolio positions on companies with lower volume and commodity exposure that represent good value, such as Cheniere and Kinder Morgan (see case study in the appendix). We have also opportunistically taken smaller holdings in midstream companies with strong growth profiles or those undergoing restructurings, such as Targa Resources and Gibson Energy respectively.

Our initial holding in the sector was Cheniere Energy, in which we established a position in May 2016. Cheniere has first mover advantage as the US’s first LNG exporter. Its output is underpinned by long-term contracts with investment grade counterparties around the globe. We believe it is one of the more defensive of the midstream players and continues to offer resilient earning and attractive value. 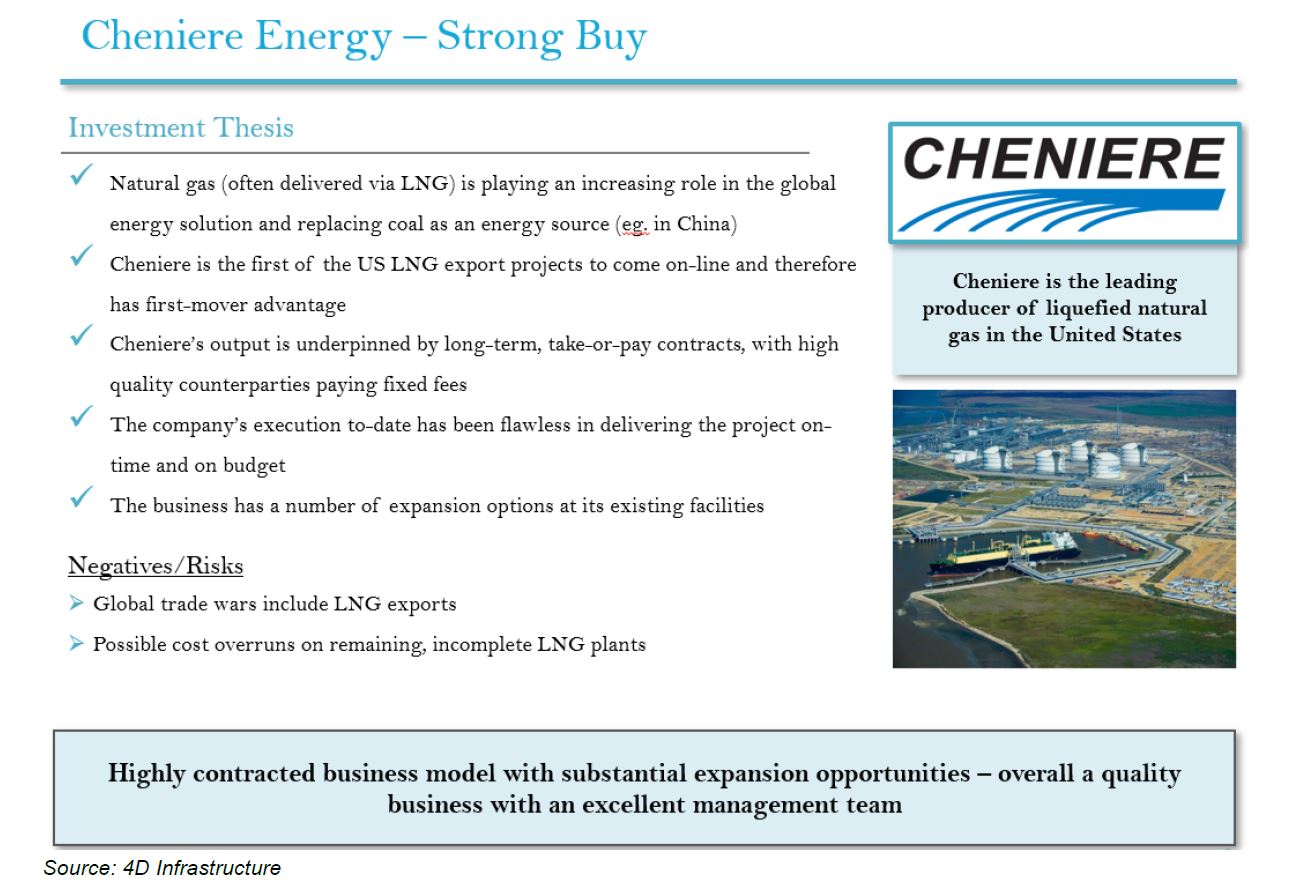 Assets, and asset sectors, can and do change and evolve over time. Individual asset characteristics can change quite markedly, often driven by external forces (eg. a market sell-off, or a changing operational environment) and changes are then facilitated by management action. It is critical that investors are aware of when fundamental changes are occurring in a sector. This is when significant investment gains (or losses) are potentially available. The US midstream sector has gone through just such a change. However, in our view that change has not yet been fully reflected in the share prices in the sector, offering real investment opportunity.

A company that has reformed and restructured

4D Infrastructure identified Kinder Morgan as a company that took important steps to strengthen its credit position and minimise commodity exposure following a share price correction in 2015. 4D took an initial stake in Kinder Morgan in June 2017 based on significant progress made in reducing debt, and the value represented by the company at its depressed share price.

Since 4D took its initial position, it has steadily increased it based on Kinder Morgan having sold its politically sensitive Trans Mountain Express Pipeline to the Canadian government, adopted a more conservative financing policy by utilising operating cashflow rather than external debt, further reduced debt to the target range required by rating agencies, had its credit ratings upgraded by the rating agencies, and announced significant dividend increases and share repurchases in 2019 and 2020. The improved credit position and a summary of asset sales is outlined below. 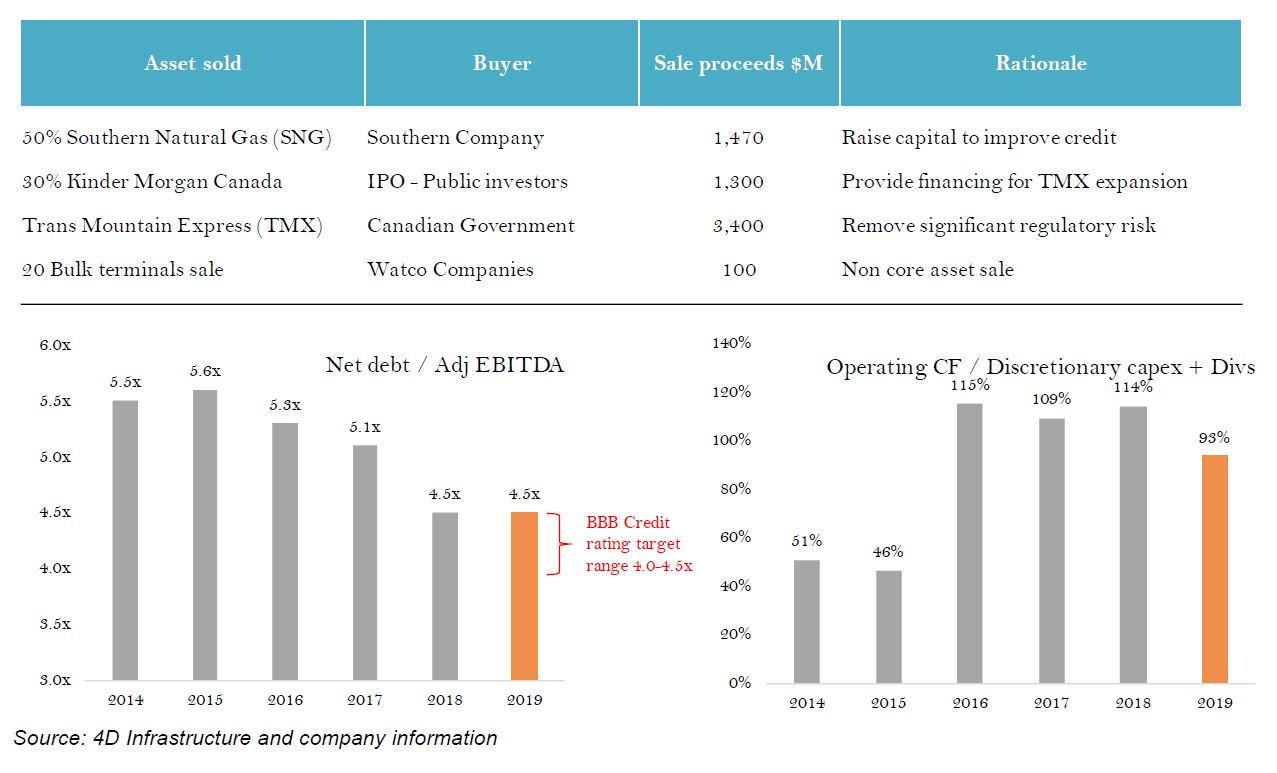