Greg Goodsell, Global Equity Strategist at 4D Infrastructure, examines the current position and prospects of these two mighty nations. While China has led the growth charge over the past two decades, the Indian tiger is looming as a very real growth rival to its north eastern neighbour, with huge potential for both sustained development and broad based wealth creation.

China and India are the world’s two most populous nations by huge margins, with populations more than four times that of the third largest, the United States. Combined, China and India make up over one third of the world’s population. Inevitably these two powerhouses will be integral to global growth for the remainder of the 21st century.

When it comes to population… it is China, India and then the rest

As shown in Table 1 below, China and India dwarf all other nations when it comes to population size. However, especially for India, that is not reflected in their share of global GDP. Inevitably these two nations will be pivotal to global growth through the remainder of the 21st century.

We know China has been strong… but how far behind is India?

While India has clearly lagged China in growth over the past 10 years (Chart 1), more recent history suggests the tiger is awakening with much closer growth profiles (Chart 2).

However, the public debt positions in Chart 4 do not fully represent the total debt picture in each jurisdiction. Chart 5 below shows that China’s total (non-financial) debt in 2014 was almost 250% of GDP, with India at around one-half that. Similarly, Chinese debt has grown by ~80% of GDP since 2007, while India’s has remained almost flat (Chart 6). The message is clear: China’s recent growth has been debt funded, while future Indian growth remains largely unencumbered by a major debt over-hang. 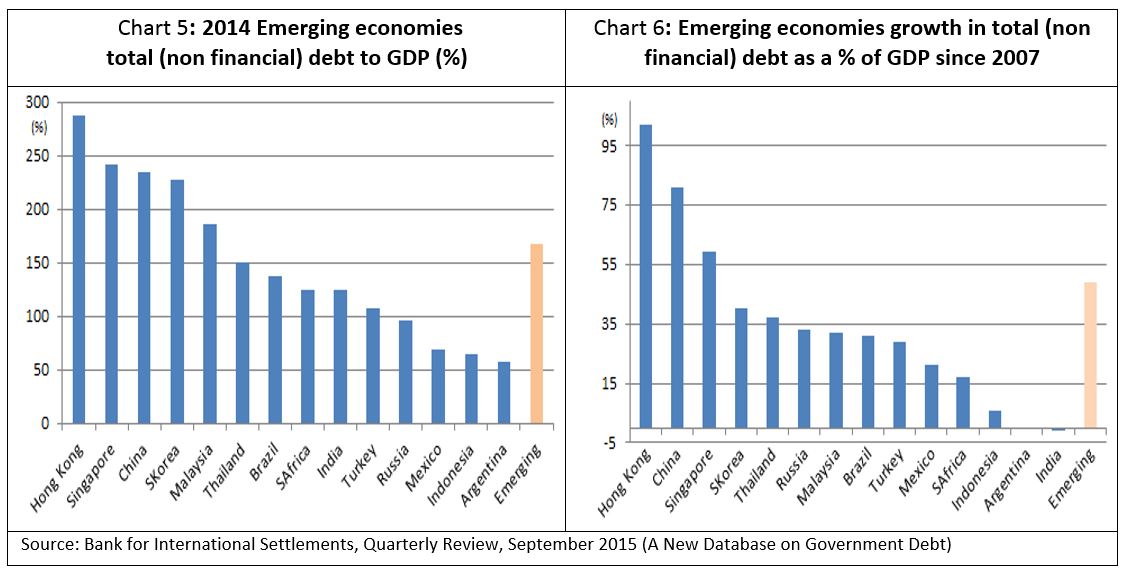 Our final points of comparison are the unemployment and inflation charts below, each reflecting a stable or improving position for each jurisdiction.

The conclusion from these economic comparisons: both countries, but especially India, are well placed to move into a period of sustained economic growth.

What will drive India’s growth... let’s start with demographics

The relative demographics of each nation will transition over coming decades as the effects of China’s one-child policy take hold. The policy has clearly worked as shown in the centre pyramid in Chart 9 below, where a bulge generation is followed by a much smaller cohort. Near-term China’s outsized working generation should help buoy growth, but it will likely precede the arrival of severe demographic headwinds mid-century, not unlike what Japan is facing today.

In stark contrast, India is in the enviable position of just starting its demographic bulge generation (Chart 10). With a large young population, the country is poised to see years of beneficial demographics that, if harnessed, will help India maintain a strong growth rate for decades to come. India also has an underutilised female population that can be slowly mobilised to drive further growth - India’s female participation rate in the labour force is just 29%, compared with 70% for China. 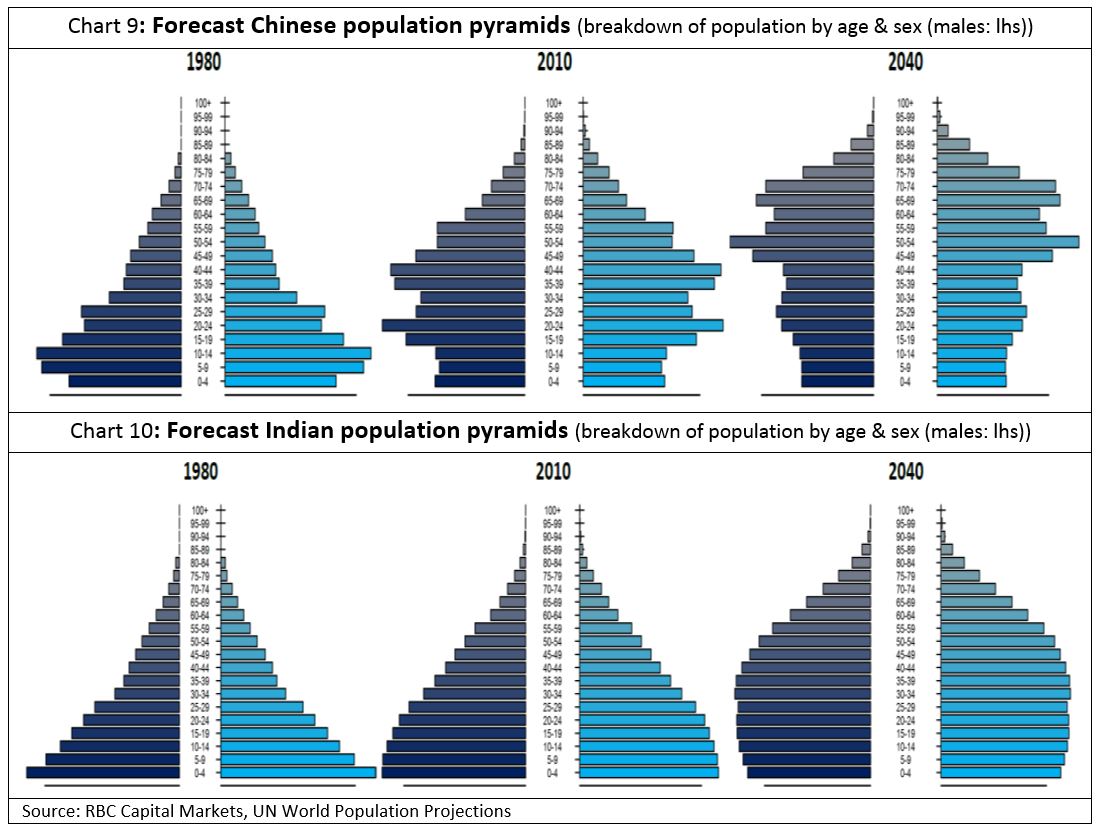 A consequence of the above demographic shifts is that China has seen drastic changes in its total dependency ratio (TDR[1]), with a large drop since 1980 driven by the one-child policy (ie. less dependent children), and its boom generation moving into working age (Chart 11). However, this process will likely reverse over coming decades as China’s boom generation retires and there are fewer children to fill the void. This will lead to an inevitable increase in the TDR mid-century.

The TDR for India (Chart 12) currently remains above regional and global averages, but given a large portion of that is driven by a high youth dependency ratio (ie. currently a high number of dependent children), it is likely that the demographic trends identified above will drive India’s TDR lower by mid-century, auguring well for a more prosperous nation.

The young tiger has sharp claws; the dragon is strong, but growing older. 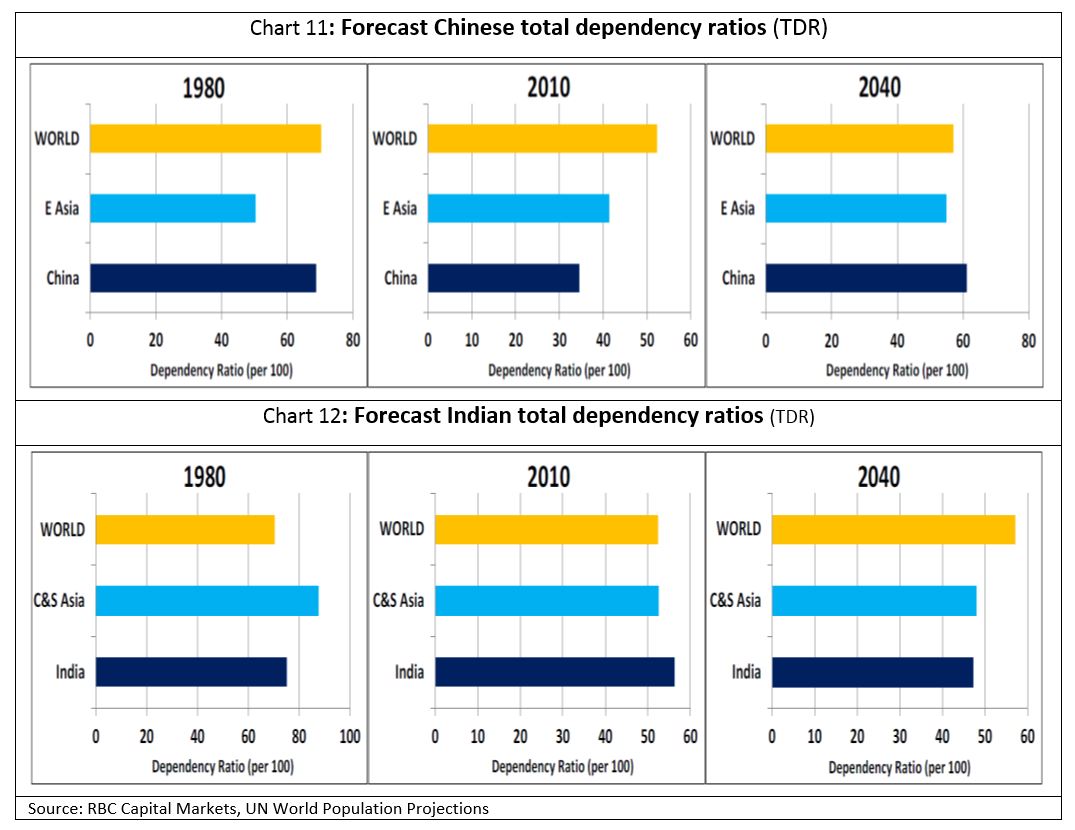 If India can harness its demographic dividend, what does it mean for the economy?

If India is able to harness the enormous demographic opportunity presented, two key outcomes could emerge. Firstly, its share of the global labour force will increase (Chart 13), which will drive substantial growth in the middle class in India (Chart 14), which, in-turn, will drive consumption and growth. The growing middle class in Asia will be one of the most enduring economic themes of the next 50 years. It is already beginning to manifest in increased passenger numbers passing through major Asian airports.

What does India need to do to capture the opportunity?

Make no mistake; India faces some very significant challenges before it is in a position to enjoy the growth paradigm described above, and move towards China’s medium-term growth prospects. We put the challenges in two broad categories:

Prime Minister Narendra Modi (the Bharatiya Janata Party (BJP)) was elected in May 2014 on a reform ticket. To date he has achieved much including:

Despite PM Modi’s clear successes his biggest, and most contentious, challenges may lay ahead. In particular:

The ongoing reform agenda in India is critical to its future success. PM Modi clearly understands this. He is committed to unleashing the tiger.

India remains a very poor nation as reflected in its GDP per capita (Chart 15). In order for economic progress to become self-sustaining, the growth dividend must be shared broadly and equitably across society. It needs to be employed to reduce the levels of abject poverty, capturing those disadvantaged sectors of society as an important component of the evolving national growth paradigm. 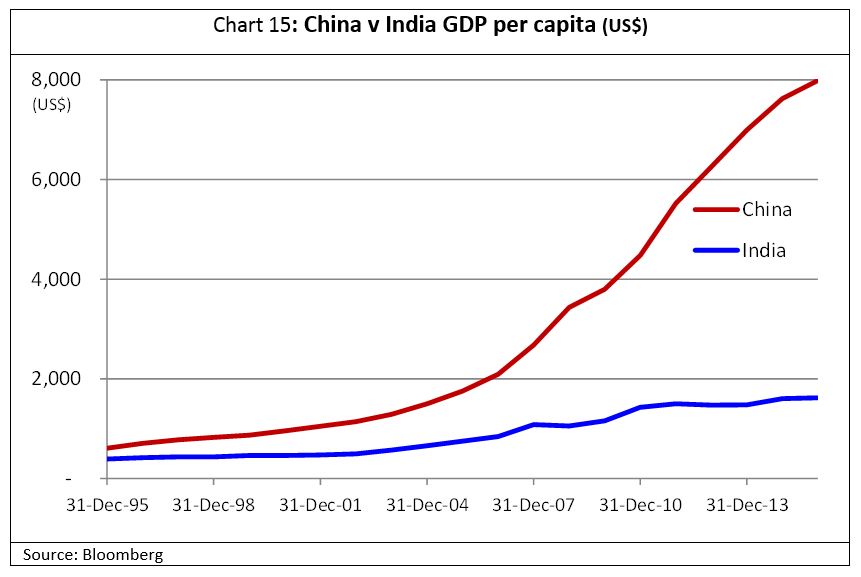 The differing experiences of Brazil and South Korea are relevant for India. Between 1965 and 1980, Brazil grew at an average of 5%+ pa, becoming a middle income economy with per capita income of US$7k+. However, the middle class comprised only ~29% of the population by 1980, which was too low for the country to rely on middle-class consumption to drive innovation and transform the economy.

In contrast, South Korea followed a similar path to Brazil through the 1960s and 1970s, only a few years behind. It grew at ~6%+ pa between 1965 and 1986 and by then it too was a middle income economy, with per capita income of US$7k+. However, in South Korea the growth was more evenly distributed which led to a sizeable middle class of 53% of the population. Strong middle class consumption then facilitated the economy’s transformation to the knowledge based one it is today, with over 85% of the population currently classified as middle or high income.

“The most important development, I believe, of the 21st century will be the rise of Asia. China has already trebled its share of world GDP over the past two decades and India has doubled it. Both these giant economies of Asia are bound to (re)gain a considerable part of their share of world GDP that they had lost during the two centuries of European colonialism….”

While China’s growth has slowed more recently, and the rise of India may take a little longer than was anticipated, we believe the central tenants of this quote from PM Singh hold true, and fairly reflect the arguments we put in this paper. The age of the tiger is nigh!

[2]: The description of the Brazil & South Korea experiences, and this quote from PM Singh, were sourced from the 2010 OECD Development Working Paper 285