Populism is spreading rapidly and globally, and becoming more aggressive in its implementation and execution. It traverses national borders and can infiltrate all political affiliations. It represents a huge challenge for modern liberal democracies, as the risk of populism is severe political and economic disruption and stagnation.

Much has been written on populism over the years. In this article, 4D Infrastructure’s Greg Goodsell (Global Equity Strategist) gives a contemporary, global perspective on what populism represents, what it looks like today and where it is headed in the modern world. This includes defining populism; assessing how big a problem it really is; looking at examples and impacts; and finally, addressing the key question: what can be done about it?

Populism: easy to see but hard to define

Populist policies and political parties are evident all over the world. However, coming up with a comprehensive definition that captures the concept is not so easy. Three definitions that resonate with us at 4D are:

While there is an element of subjectivity in relation to all the definitions, what is clear from the above is that a fundamental tenet of populism is the separation between the ‘good’’ and ‘bad’ in society, with the ‘bad’ enjoying a state of privilege or preference which should be challenged.

Within a political context, populism can be represented by the following diagram. 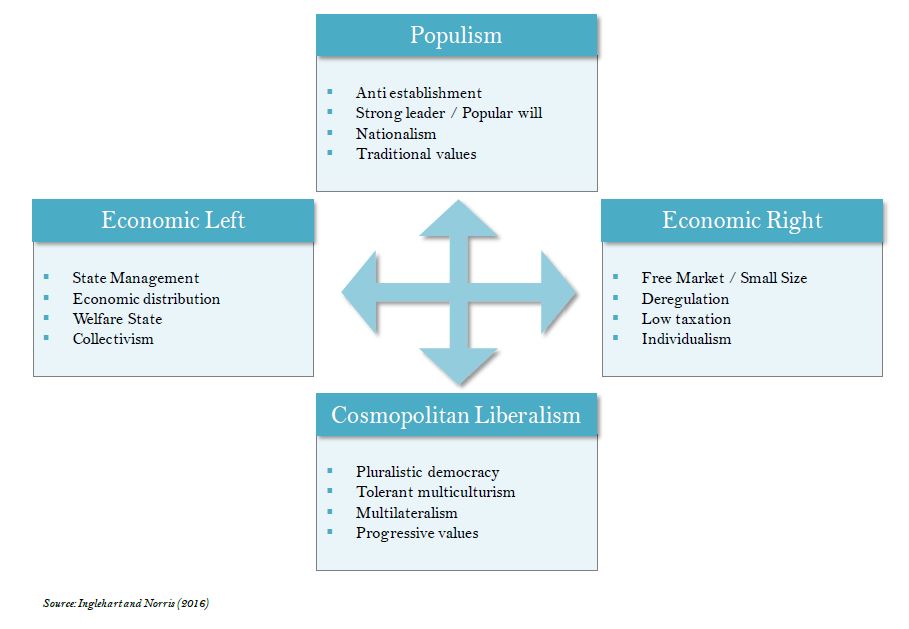 Populism doesn’t necessarily attach itself to either the traditional ‘Right’ or ‘Left’ of the political spectrum, but it does exhibit or embrace a number of important principles as below. We’ve included examples from the current US administration.

The two key drivers of populism are typically immigration and globalisation/international trade. [1]

Using our previous example, Mr Trump was elected on the back of promises on immigration, international trade, taxation, public spending and healthcare. Not surprisingly, he has acted (or tried to act) on all of these issues.

The spread of populism

Populism in politics has become very widespread, especially over the past decade. We have identified Mr Trump’s 2016 Presidential election campaign as being decidedly populist, while Bloomberg suggests that Brazil, India, Italy, Mexico and Turkey also fall into the populist camp.

More broadly, the spread of populism is represented by the following 2016 chart by Inglehart and Norris. They used the 2014 Chapel Hill expert survey to classify nearly 300 political parties along the ‘Economic Left’ and ‘Economic Right’ spectrum shown in the previous chart. They then identified the populist parties among them. Their classifications show a tide of populism across the political spectrum running from left to right. 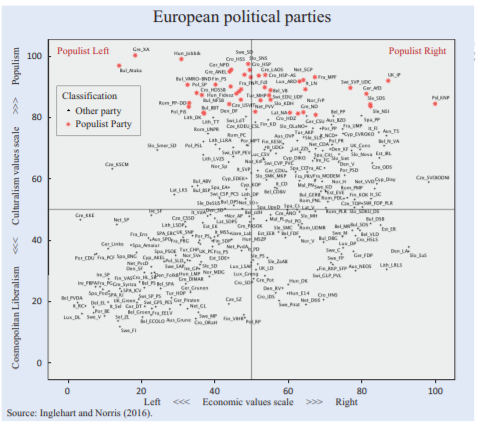 And populism continues to spread. In a March 2019 Global Insight research piece, Ben Baris of Bloomberg concluded that:

Why is populism so dangerous?

‘The populist economic agenda is characterised by short termism, the denial of intertemporal budget constraints, the failure to evaluate the pros and cons of different policy options as well as trade-offs between them. It often focuses on single and salient political issues, overemphasises negative aspects of international economic exchange and immigration and blames foreigners or international institutions for economic difficulties. The populist economic agenda rejects compromise as well as checks and balances and favours simplistic solutions.’

There are a number of examples of populism around the world.

Central banks are increasingly becoming the target of populist leaders

Central bank monetary policy separation and independence from government over the past 25 years has been one of the great success stories of global economic policy. As The Economist[3] notes, over that period billions of people around the world have grown use to low and stable inflation with interest rates under control. However, we now have Mr Trump demanding interest rates be slashed, and speculating on sacking the head of the US Federal Reserve. Brexiteers discredit the competence and motives of the Bank of England in delivering alarming post Brexit growth forecasts, in Turkey President Erdogan has been clashing with the central bank, and in India a competent central bank chief has been replaced, with interest rates then cut ahead of the election.

These are difficult times with global growth potentially slowing, so a genuine need for considered, independent central bank policy responses may be approaching.

What does populism mean for infrastructure investment globally?

As indicated above, the rise of populism is fundamentally an over-arching political concern that leads to poor policy, with the direct impact on infrastructure and other asset classes secondary. Populous rhetoric is bad for policy across the board, or more accurately ‘attempted’ policy. For us at 4D, as infrastructure investors, the politics of populism is one part of our analysis and has driven some country downgrades (leading to reduced portfolio exposures). But more importantly, in terms of infrastructure we focus on the strength of the judiciary in that country. When looking at long-dated assets, governments and government policy will come and go, but we need the judiciary in that jurisdiction to be stable throughout to uphold the sanctity of contract and regulation in place.

However, infrastructure has certainly not been immune to the populist curse. Recent populist political actions having a direct impact on infrastructure owners and operators has included the following:

Where does Australia fit on the populist spectrum?

With a Federal election looming, it is worth reflecting on the influence of populism in our back yard. Our observations include:

So Australia is certainly not immune to the populist plague.

Is it too late?

Has populism progressed to democracy’s new era of ‘Tear-it-all-down?

Recent activity and research has identified an alarming new trend – the tendency to oppose everything without compromise[4] or alternative. Governments throughout the western world are struggling to govern. The UK parliament recently voted down a multitude of options for a Brexit, with chaos the result. British voters are similarly inclined to support the negative – with a ‘No’ vote to PM May’s Brexit deal, but equally strongly supporting a ‘No’ to leaving the EU without a deal.

France’s ‘yellow vest’ protests are a further example of this, seemingly only able to agree on a rejection of the status quo and distrust of institutions. According to Steven Levitsky of Harvard University, this is happening everywhere and represents a collapse of the ‘Schumpeterian democracy’ (named after the Austrian theorist Joseph Schumpeter). This has long been the basis of modern democracy in which the establishment managed popular will and sought the common good.

So what can be done to stop the march of populism?

Populism poses a real threat to democracies for a number of economic, social and governance reasons. From an economic perspective the key issue is that populism leads to the development and attempted implementation of poor economic policy. Populism is bad for all asset classes and society in general. It sets the ground work for increasingly violent confrontations, such as the French ‘yellow shirts’.

There are no easy answers. Major parties globally need to recapture the narrative by being seen to address classic populist issues (eg. wealth distribution) and communicate/educate as to why the traditional liberal democratic system has worked well for so long and remains the best governance option known to society.

[3] The Economist: The independence of central banks is under threat from politics, April 2019

[6] The Economist, The French president responds to the gilets jaunes, April 2019