Global Matters: Listed infrastructure investment to 2020 and beyond (Part 1)

- a chronic under spend on critical infrastructure over the past 30 years - in virtually every nation;
- the emerging middle class, especially in developing economies, continues to demand more and better infrastructure; and
- public sector fiscal positions remain fragile, thereby limiting the potential fiscal response available to governments.

1. Under investment in infrastructure has been chronic over the past 30 years

The lack of public investment in infrastructure over the past 30 years has been a feature in both developed and emerging economies. This has been well chronicled via numerous reviews cataloguing this trend. We provide a brief summary of some of the key findings of recent studies in Table 1. 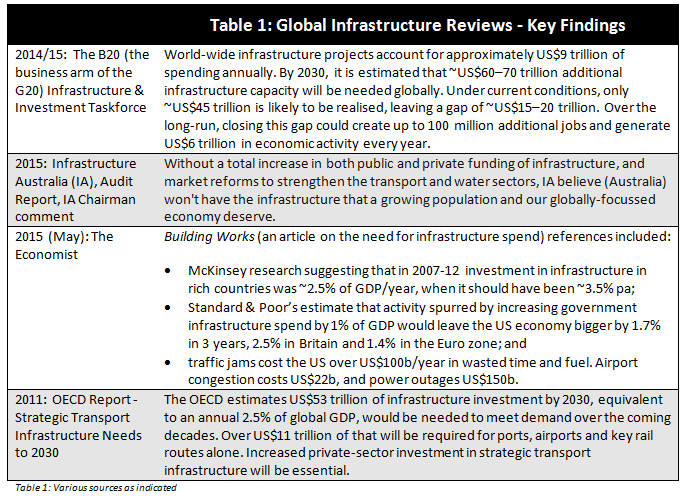 The findings above are consistent with the Australian experience. The charts below show Public and Private Gross Fixed Capital Formation (GFCF) in Australia from 1960. While GFCF is a broader measure than just infrastructure investment, the patterns evident are still instructive.

The average Public GFCF/GDP (%) from 1960 has been ~4.6% pa (Chart 1 on the right hand side below). However, this masks a significant and extended dip below this average from around 1985, a brief recovery in 2009-10, and the ratio trending sharply lower since. It has averaged only ~4.3% pa over the past 30 years, consistent with the general deterioration in the national infrastructure stock that has occurred during that time.

These broad macro observations are confirmed in practice when smaller, discrete sectors of an economy are examined. Chart 2 highlights the acute need for capital expenditure in the US in one of life’s absolutely essential commodities: clean drinking water. 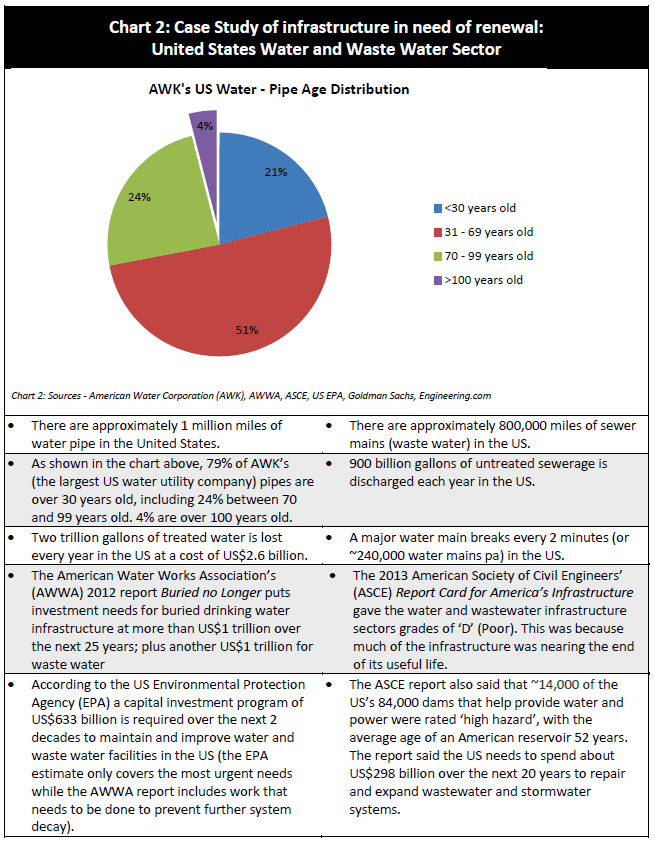 Emerging markets are in the midst of one of the most powerful and enduring themes that the global economy will experience over the next 50 years – the emergence of a middle class. As shown in Chart 3 below: 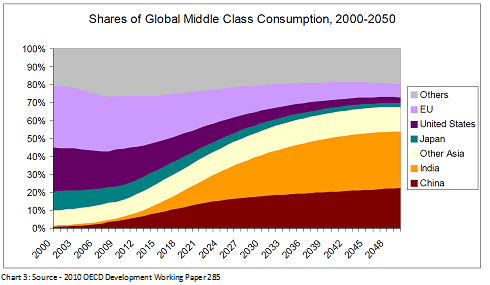 A growing middle class inevitably demands more and better infrastructure to service and support their improving living standards. Privately funded infrastructure will continue to be a growing source of funding to meet that demand.

Historically, infrastructure investment has been the domain of the public sector. However, this is gradually changing and we believe that change is set to accelerate because of the fragile state of public sector finances around the world.

We illustrate this point by looking at the fiscal positions of two countries that were prominent in the GFC: Spain and Portugal. As shown in Chart 4 below, both Spain and Portugal are making solid post-GFC recoveries as measured by GDP growth. While both countries suffered severe and protracted GFC induced recessions, including a period of tough austerity measures, each country’s growth profile is now back in the black. 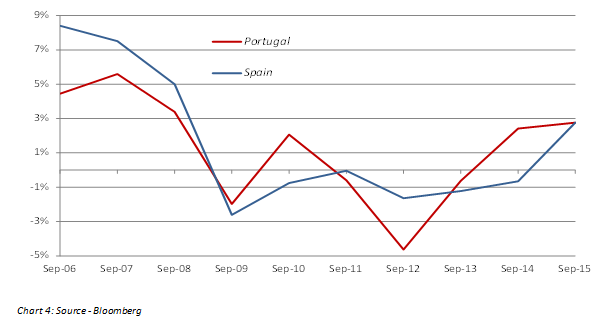 However, while GDP growth has returned, a residual GFC hangover is evident in Chart 5 below. Both countries Budget Deficits have contracted somewhat, but Public Debt/GDP (%) has continued to rise.

Spain and Portugal are not unique with this post-GFC economic profile of recovering GDP growth, persistent fiscal deficits and high/expanding public debt/GDP ratios. Canada, for example, has public debt/GDP of 95%, the US 75%, France 96%, Japan 232% and Italy 132%.

The implications for potential infrastructure spend is clear – fragile fiscal and balance sheet positions will constrain public sector infrastructure investment over the medium term. By necessity and opportunity, the private sector will play an increasing role going forward.

There has been substantial under investment in the global infrastructure stock over the past three decades. Combined with the emergence of a growing middle class, especially in Asia, means there is a growing need for increased infrastructure investment around the world. However, government fiscal positions remain fragile post the GFC. As a result their ability to fund the necessary investment is constrained, and increased private sector involvement in funding the capital demands will be a necessity.

In Part 2 of this series we will examine listed infrastructure’s many attractive investment features. As a consequence we believe GLI will continue to grow, as it serves a larger role in the solution to how the world funds an ever expanding infrastructure need.